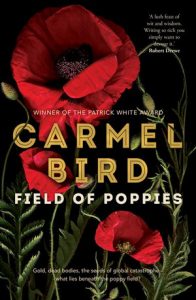 So, it is January and time for our various 2019 round-ups, which, of course, have already started coming. But, oh dear, what a terrible time for us to be writing our enthusiastic round-up posts, when so many Australians (including some of us?) are in such trouble. It’s not surprising that, as I noted in my own blog’s post on new releases last week, they include several on climate change. It’s also not surprising that, these days, my mind keeps turning to Jane Rawson’s A wrong turn at the office of unmade lists and her vivid vision of burn-out Melbourne! Books are important – but of course I don’t need to tell readers here that.

Anyhow, the Challenge is now eight years old, and we now provide access to reviews for just over 6,100 books, meaning that the number of books reviewed – books written by Australian women writers, past and present, and across all forms and genres – grew by 17% during 2019. You can see them all at Books Reviewed for AWW Challenge link. This is an increasingly impressive resource, one that has been achieved through the hard work of all you who read the books and submit your reviews to our database, and of our AWW Challenge team volunteers who keep it all running smoothly. A wonderful cooperative effort for which I thank everyone.

Now, as like to remind everyone in this annual post, this Literary and Classics area is slippery, because there are no universally accepted definitions for either. Consequently, we primarily rely on reviewers’ categorisation. I do tweak this occasionally. For example, where most reviewers have categorised a book as Literary but one or two haven’t, or vice versa, I will make a call. Or where, because “Literary” is an optional sub-genre, some reviewers don’t realise they can apply it, I will apply it. Given this, my assessment is that around 590 reviews were posted in this category in 2019, representing a 7% decrease on last year. This is still a healthy number, and, anyhow, the count is rough around the edges!

Just a quick discussion of December before we get onto the annual round-up. Some 33 reviews were posted during the month, around the same as last December, so nicely done everyone.

The three clearly distinguished main narrative strands are arranged in a nested format and these nests are interspersed with short, anonymous pieces that graphically illustrate the fate of women who sometimes make poor choices but are often simply at a disadvantage due to their gender.

Finally, the shortlists for the 2020 Victorian Premier’s Literary Awards were announced in December, and can be seen at the Wheeler Centre’s page. Three women writers – Yumna Kassab’s The house of Youssef, Anna Krien’s Act of grace, and Tara June Winch’s The yield – were shortlisted for the fiction prize. Kassab’s book has yet to be reviewed for the Challenge.

Now, on to wrapping up the year…

Australian women fared well in the year’s literary awards, including winning the Miles Franklin Award. Note that there were fewer awards as several –  including the Adelaide Festival Award, the Dobbie and Kibble Awards, and the Barbara Jefferis Award – are biennial and were not awarded in 2019.. Like last year, no one book dominated the awards.  So, Australian women who won significant literary awards include:

All but one of these books – Pam Brown’s click here for what we do – have been reviewed for the challenge,

Most reviewed Literary books in 2019

Unlike last year, there was less bunching at the top this year. I wonder why? Were fewer books published this year? The most reviewed books were:

Significantly, only one of these has appeared on major literary award shortlists, but the one that did, Lucashenko’s Too much lip, came away with the big one, the Miles Franklin! Of course, some of these books may be so new they were not eligible for 2019 awards, so there’s still next year!

All of these are novels, but there is a mix of genres: Bird’s and Nunn’s are genre-benders, while those by Lester, Parett and Rimmer are historical fiction (which always features well in our most reviewed list). Only Lucashenko’s is a contemporary novel.

Lester’s The French photographer was reviewed in December by a rarely featured blogger here, Michelle (Beauty and Lace). She loved the book, so much so that she makes a big claim for it:

I found history to be quite tedious at school but reading wonderful novels like this can educate me on historical events that I had absolutely no idea about without the tedium I always attached to a history lesson.

I too love how historical fiction can bring history to life – but I really hope that today’s students are taught history in a more engaging way than Michelle was!

Most reviewed Literary authors in 2019

There was, again, a complete change in our top reviewed authors from last year’s – and, again, as with the most reviewed literary book, there were fewer at the top, but quite a bunch in the third position. This year’s top positions went to:

These are all for novels, except Chloe Hooper’s The tall man and The arsonist, and many are historical fiction.

Around 6.5% of the reviews posted to Literary/Classics were for Classics, which is a little less than last year’s 8%. The 39 reviews were for books by 24 authors, and included the first reviews for two little known authors: Capel Boake (1889-1944), and Neilma Sidney nee Gantner (1922-2015). Reviews were also added for two other authors who’d only had one review before this year – Mary Gaunt (1861-1942) and Louise Mack (1870-1935). We have Bill’s (The Australian Legend) AWW Gen 2 Week to thank for some of these lesser known writers appearing in the Challenge this year.

Last year, the most reviewed Classics author was shared between six authors! This year, however, one led the pack, and it’s an interesting one, classic children’s author Mary Grant Bruce, who garnered 4 reviews. Sharing second place with three reviews each was a regular most-reviewed-classics author, Thea Astley, alongside Louise Mack and Ethel Turner.

Just one classic was posted in December – by n@ncy for Thea Astley’s Drylands. N@ncy listened to the audiobook, due to cataract surgery. She liked the book very much, saying that

Perhaps when I can enjoy better vision
….I will re-read the paperback version.
Astley’s prose is worth savoring again.

It comes as no surprise that our top Classics reviewer was Bill (The Australian Legend) who posted 9 Classics reviews, followed by n@ncy (NancyElin) and Brenda (GoodReads) who each contributed 5. A big thanks to these three – and to the rest of us Classics readers too of course!

Before I list “my” top reviewers I must note that the figures only count reviews for Classics and Literary. All have contributed other reviews too. This year’s top reviewers includes three of last year’s top 5, with Cass and Cloggie sneaking in amongst them. I’m ashamed to say that I fell off the perch this year, though I remain in the top ten with the other perch-faller-offers! However, the point is not how many reviews you add, but that you take part. Every review is valuable to us.

A big thanks to these five, and, in fact, to everyone who contributed even one review this year. Every one of them helps us achieve our goal of recognising and promoting the diversity of Australian women’s writing.

As you’ve realised by now, 2019 was a steady-as-she goes year for my corner of the Challenge. I’d love it to continue – or increase even (!) – in 2020, so if you haven’t joined the Challenge in the past, please consider doing so this year. It’s easy and it’s fun – just sign on here.

Meanwhile, thanks to everyone who contributed one or more reviews this year. We appreciate them all.