History Memoir and Biography Round Up: April 2020 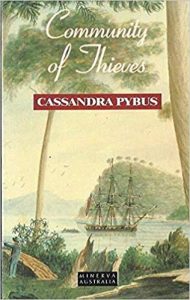 During April, there were nine titles reviewed within the History, Memoir and Biography category. I’ve excluded the books that are historical fiction and present-day true crime, which has whittled the numbers down a little. Despite some of us (but certainly not all) thinking that the lockdown would give us more opportunity to read, perhaps our great expectations of churning through piles of books haven’t eventuated. I know that I haven’t read anywhere near as much as I thought I would – have you?

Having read Truganini, Jennifer Cameron-Smith returned to another of Cassandra Pybus’ earlier books, written almost thirty years earlier, which dealt with Bruny Island and the fate of the Nuenone people more generally. In reviewing Community of Thieves (1991) – and what a double-edged title!- Jennifer writes:

In 1829, Cassandra Pybus’s great great grandfather, Richard Pybus, took up a large land grant on Bruny Island, the traditional home of the Nuenone people of south-east Tasmania. Within months of Richard Pybus’s arrival, there were no Nuenone left on the island. The Nuenone had either died from disease, been murdered or exiled. Truganini, the last of the Nuenone, died in 1876. While Truganini’s story is covered in more detail in ‘Truganini’, this book (published in 1991) is a more personal reflection on the impact of European colonisation of Tasmania.  (Review here)

We don’t often have children’s books here in the History Memoir and Biography Round-Ups, but we do this month! Anzac Girl: The War Diaries of Alice Ross-King (2020) is a 39-page hard cover picture book, aimed at 6-10 year olds. Ashleigh Meikle at the Book Muse writes: 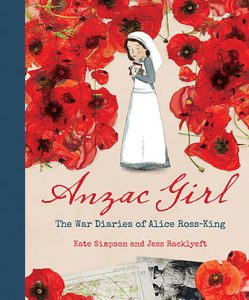 Anzac Girl: The War Diaries of Alice Ross-King is a picture book, based on the war diaries of the WW1 nurse, written by her great-granddaughter, author Kate Simpson …Kate has used extracts from her great-grandmother’s diary to tell the story, and the illustrations by Jess are combined with photos of the actual documents from the war and Alice’s time spent as a nurse across Gallipoli and Europe. Told simply for kids aged six and older, it is still very evocative and encapsulates the sense of what the war was like for Alice. It captures what the war was like in a time of war in a way that isn’t too confronting for younger readers. (Review here)

Cass Moriarty reviewed Emma Campbell’s The Last Post (2018), a group biography which she describes as a “non-fiction coffee table work of art”. Each day at the Australian War Memorial there is a sunset service that features paying tribute to an individual who died in war or operational service, closing with the Last Post. Cass writes: 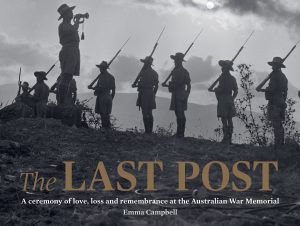 The Last Post is a description of the Last Post ceremony that occurs each day at the Australian War Memorial as a tribute of love, loss and remembrance to those Australians that have given their lives in various conflicts from the Boer War to Afghanistan. …A hardback, landscape print version, The Last Post is a combination of chapters covering topics such as The Origin of the Last Post, The Families of the Fallen and Ceremonies for Special Occasions, all accompanied by absolutely beautiful full-colour and black and white photographs of the ceremony taking place, including laying of wreaths, state visits, general public and school visits, the families of those remembered, official dignitaries and military personnel and others. Interspersed with these informational chapters are individual stories of those men and women who have fallen; the stories of their lives before and after enlistment, their actions during deployment or service and the manner of their death, accompanied by historical photographs of each person. (Review here)

The reproduced autobiography of Catherine Helen Spence, who used to grace our Federation $5.00 notes issued in 2001, has been reviewed earlier as part of Susan Margary’s edited volume Ever Yours C. H. Spence. But here we have Emma at Books Around the Corner (from France!) tracking down the original An Autobiography (1910) as an e-book to read, unmediated and in its own right. She writes:

Spence’s autobiography lets the reader hear her voice, the voice of a caring, intelligent and energetic woman. She had strong beliefs and values and put her heart in the causes she chose to advocate. She fought all her life for effective voting. She was still on the board of various social services when she was in her seventies.I’m glad I read Spence’s autobiography because there were a lot of interesting information in it but it’s not exactly a smooth read. Her prose is a bit heavy and sounds more like an account than a story….It feels like she was writing for her contemporary readership and not for posterity. It’s her legacy, an homage to her family, her friends and partners in all her social and political endeavours. (Review here)

A more contemporary memoir can be found in Sue Course’s Lost Letters from Vienna (2019). Born in Vienna, with wealth and business influence on both sides of her family, she left in 1938 as a 4 year-old when most, but not all, branches of her formerly affluent extended family dispersed as the Nazi influence spread across Europe.  Some stayed in Austria, while others migrated to London, America, France and in Sue’s case, suburban Melbourne. Janine at Resident Judge, who also lives in Melbourne (and knows Sue through her environmental work) writes: 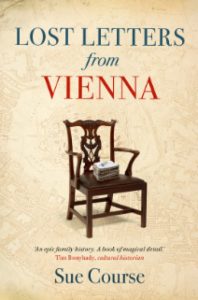 The stories of different groupings in this tightly-woven family network are told in fairly short chapters, arranged thematically whilst moving forward chronologically. Several members of the family might be dealt with in the same chapter which I found at first a little disconcerting, until I realized that I was listening to someone tell family stories, which often jump between generations and family branches…Her telling of the story of her family is told through relationships, with an increasingly suburban, Melbourne-based perspective as the book moves on. …Using the family letters, she paints a rich picture of a Vienna world that is lost, but she also paints a domestic picture of a family re-establishing itself in a newer world, very close to my home. (Review here) 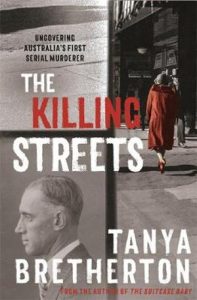 We have featured two of Tanya Bretherton’s earlier books previously: The Suitcase Baby and The Suicide Bride. In her most recent book The Killing Streets: Uncovering Australia’s First Serial Murderer (2020) we are taken back to Depression-era Sydney and a series of brutal murders of women in public places. In her review, Mrs B. writes:

The Killing Streets charts a time when Sydneysiders were gripped with fear and uncertainty. …With a PhD in sociology and her work in narrative life history, along with social history, this senior research fellow has produced a series of books that are carefully researched. I admire Bretherton’s unique blend of bringing to life lost fragments of Australia’s criminal past, which is deftly combined with her critical interrogation of the historical conditions of Australia’s past. (Review here)