Short Stories Round Up: April and May 2020 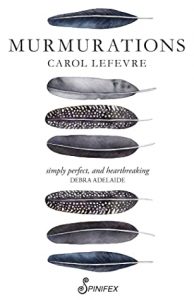 A lot has happened in the two months since the last Short Story Round Up. It seems in this COVID -19 world, despite isolation and having spare time, I’ve read MUCH less than usual. I’ve also watched way too much Netflix. I would blame it on the exhaustion of homeschooling but I don’t think what little I’ve done can be classified as homeschooling!

Despite my reading downturn I’ve still been buying plenty of books. Most have been by Australian writers: the majority of those have been new releases by authors whose in real life launches have had to be cancelled. I’ve also attended quite a few online author events. I even tried to watch the Stella Prize announcement live online for the first time ever but my computer crashed seconds before the announcement!

Now onto the reviews. One collection that piqued my interest after reading Veronica from The Burgeoning Bookshelf’s review is Murmurations by Carol Lefevre. Published by Spinifex Press in April, Veronica says the collection is ‘a gem of a book that will give you cause to stop and think.’ At only 112 pages, she says each story in this compact collection packs an emotional punch. She describes the prose as ‘ lyrical, insightful and heartbreaking,’ and reports that once she finished it, she immediately read it again. Now that’s a recommendation!

Fans of The Yield, Tara June Winch’s 2020 NSW Premier’s Literary Awards Book of The Year, may like to try reading her 2006 offering, Swallow the Air, published by the University of Queensland Press. Reviewed by Kim Forrester of ReadingMattersblog the book is a gripping account of a young Aboriginal girl called May whose single mother dies and she is forced to strike out on her own. The book charts her journey and is told in a series of self-contained short chapters and vignettes, hence why I’ve co-opted this one for the short stories page. Kim says the book is “written in lush language.’ and contains ‘many evocative descriptions of people, places and experiences that it’s the kind of book you want to savour rather than rush through.’ 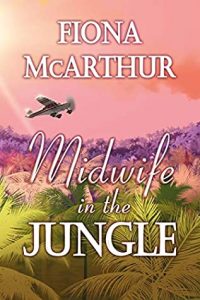 Two reviews came in for Midwife in The Jungle, a romantic novella by Fiona McArthur. The first by Claire from Claire’s Reads and Reviews who says ‘I really enjoyed this romance novella, at just under 200 pages, it was the perfect escapist read I needed with all the things that are going on at the moment.’ Sharon from Sharon’s Reviews on Goodreads revealed this was the first book by the author she’d read and says it was a fantastic introduction. ‘Fiona’s writing style makes you feel like you are right there with the characters.’ She highly recommends the book and sums up the novel as ‘a very entertaining and enjoyable book which will stay with me for a long time.’ 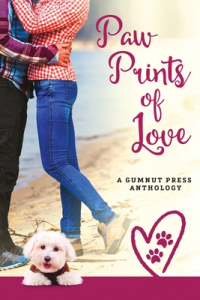 For the dog lovers out there the anthology Paw Prints of Love published by Gumnut Press is written just for you. A series of stories all set around dogs and a dog beauty parlour in a town called Stonecrest Bay on the south coast of Western Australia. Claire of Claire’s Reads and Reviews, says the anthology starts strongly with the first story, All the Good Stuff by Lisa Knight, being ’a perfect introduction to the town.’ Claire sums up the book as a ‘thoroughly enjoyable anthology that allowed me to dip in and out of Stonecrest Bay at leisure, I only wish I could move there myself and find my true love.’

Next up is the The New Arrival: A ‘Pride and Prejudice’ Variation Vignette by Margaret Lynette Sharp. Sharon’s Reviews on Goodreads recommends it as an ‘enjoyable short story.’

Switching genres, the next review is for Thrill Me: Suspenseful Stories, edited by Lynette Washington (Editor), Glimmer Press. Shelleyrae at Book’d Out says the ‘provocative’ short story collections offers a variety of thrills and chills to suit a wide audience. She says the stories ‘push the boundaries of the traditional thriller, eschewing cliche’s while still eliciting the heightened emotion that characterises the genre.’

Vasilisa the Wise and Other Tales of Brave Young Women by Kate Forsythe and illustrated by Lorena Carrington continues to garner praise. Angharad from Tintededges.com says the book is ‘beautiful, original collection of stories suitable for all ages and especially for collectors of fairy-tales.’

I really enjoyed this review by Bill Holloway of The Australian Legend of The Babe is Wise: Contemporary Stories by Australian Women. It was interesting to read the bits of information Bill had unearthed about the book and the writers. An anthology of 21 Australian Short stories, it was published in 1987 an includes well-known writers such as Judith Wright, Kate Grenville, Joan London, Thea Astley and Elizabeth Jolley. Unfortunately it seems the book is not in print (Bill’s was an old copy he picked off his tbr pile) so finding a used book or seeing if the library has a copy are the only options.

To finish off this round up, Cass Moriarty reviews the latest Griffith Review on her Goodreads account. This edition’s themes include ageing, the passage of time, the costs of an ageing population, dementia, institutional care, social transformation, mortality, agency and the privilege of old age. Cass says this issue as ‘an especially well-constructed and curated selection of writing from (mostly) older writers who are able to look at life and ageing through the prism of their own years of experience….consistently excellent’. With contributors including Helen Garner, Charlotte Wood, Melanie Cheng and Vicki Laveau-Harvie I am going to be getting myself a copy of issue 68 for sure.