History Memoir and Biography Round Up: May 2020 May brought ten reviews in the History, Memoir and Biography category, most of which were either memoirs or, unusually, histories. A number of reviewers read books that have already been mentioned in recent round-ups. Kate@Booksaremyfavouriteandbest reviewed Clare Bowditch’s Your Own Kind of Girl, Janine at Resident Judge reviewed Vicki Hastrich’s Night Fishing, and Brona at Brona’s books reviewed Truganini by Cassandra Pybus. If you’ve already read these books, you might like to check out what these reviewers had to say about them. And if you haven’t read them- they have all received excellent reviews here at the Australian Women Writers Challenge!

And so, onto the ‘new’ reviews for this month. What joy for a historian- there are three of them!  Nikki Savva’s Plots and Prayers (2019), dealing with Malcolm Turnbull’s demise and Scott Morrison’s ascension, is very recent history! In her review, Calzean writes:

The author has a conservative leaning but she pulls out a balanced description of the end of PM Turnbull, the wannabe PM Dutton and the eventual new PM Morrison….The book has plenty of perspectives, lots of repetition and a flow that seemed to me to need a good edit. Nonetheless it is a sad indictment of those who are in power or want to be.  (Review here).

We have read several of Leigh Straw’s books about 20th century women in the underworld, but Straw’s After the War (2017) takes a different tack when, spurred by a family connection, she ventures into the lives of men who fought and returned from World War I. 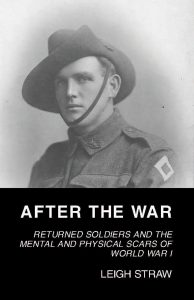 There are fifteen main protagonists, with the brief appearances of another fourteen veterans, all of whom volunteered as members of the 1st AIF. Her book takes us through enlistment, fighting, and their return to Western Australia, with a particular focus on the difficulties they faced when returning to their families in a society limping through indifferent economic conditions towards the Depression….It is an academic history, complete with footnotes and literature review, written with a family history focus…[and] an easy book to read, despite its difficult themes. It is an academic text, but with its grounding in the lived experience of men and their families, it wears theory and argument lightly. (Review here). 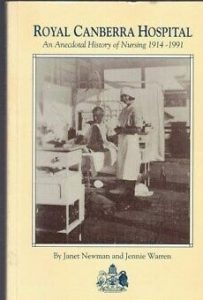 The Royal Canberra Hospital closed on 27 November 1991. A sad day for many Canberrans, to be followed by an even sadder day on 13 July 1997 when the planned implosion of the building resulted in the tragic death of 12-year-old Katie Bender. …had several connections to the hospital: I’d worked there from 1974 to 1979, met my (now) husband there in 1976. I’d lived in both nurses’ homes, made some very good friends, been part of a community….When this book was published in 1993, I bought a copy. Ms Newman and Ms Warren wrote the book to set down the anecdotes of nurses who worked there while there was still so much living history. …I like to be reminded of those strong female role models who were such an important part of the history of Royal Canberra Hospital. (Review here).

Two of our reviewers read Tanya Heaslip’s An Alice Girl (2020), and Theresa Smith interviewed the author in her Behind the Pen feature on her blog. Brenda Telford writes: 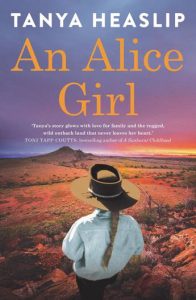 An Alice Girl is the story of growing up in the vast Australian outback in the 1960s and 1970s, on an isolated cattle property, surrounded by the love of their parents, with their mother being the one to give the necessary cuddles for comfort. Aussie author Tanya Heaslip tells the story of her life from a young age; the important lessons they all learned; the friendships that were made; and the love, and funny situations they sometimes found themselves in. (Review here).

Ashleigh Meikle at The Book Muse also read the book, and writes:

These stories precede Alice to Prague, and show readers where Tanya came from and how she found herself on the journey and in the career she has now. Reading both is a great experience – two periods in her life, both as fascinating and as intriguing as the other. From one extreme to another across both books – isolation in Alice and the Northern Territory to surveillance under a Communist regime in Prague. Both are fascinating stories. …I enjoyed reading this book about Tanya’s early years, seeing how she grew up and what initiated her taste for writing, and the outside world, which is further explored in Alice to Prague. For readers of that book and new readers, this is a fantastic read that everyone will get something out of. (Review here)

Jennifer Cameron-Smith read a memoir, written in 2002, that clearly distinguished itself from an autobiography. In reviewing Finding Ullagundahi Island by a now-deceased indigenous author, Jennifer writes: 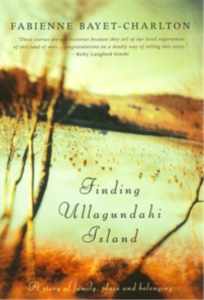 In her Author Note,[the author] wrote that ‘… although this book is strongly autobiographical, it is not an autobiography.’ She wanted to make it clear that it is written from her perspective….This is a deeply personal story, a quest for knowledge, for identity, for family history. [The author], then a young Aboriginal woman, travelled to northern NSW, to the Clarence River. She was in search of Ullagundahi Island where her grandmother and grandfather were born. Records were sparse, and those with memories of her grandmother were few. But she never stopped searching. The book is presented as a letter to her daughter, Ashlyn May. …Her story of dispossession is not unique, but her telling of it is so very powerful. A beautifully written autobiographical book. I wish I’d read it earlier. (Review here.)

The Griffith Review always has a mixture of fiction and non-fiction, memoir and reportage and Griffith Review Issue 68: Getting On (2020) is no exception. Cass Moriarty’s review mentioned several contributions to the book, but I have selected out those that appear to be memoirs: 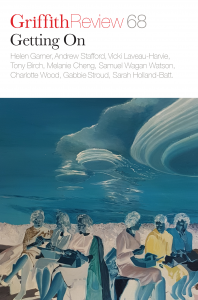 …beginning with the exquisite Helen Garner and her essay ‘The Invisible Arrow’. In her famous conversational style, Garner casually discusses the parallels between her own aging body and her ability to write, describing the degeneration of her body with the changing attitudes in her own writing – what she wants to write, what she is able to focus on, and what she wishes to record. Such simple words yet so powerful. …In her essay ‘In an Unguarded Moment’, Gabbie Stroud reminisces about the suicide of her brother thirty years earlier, and the reverberations of his loss still felt by her family today, even by her children who never met him… [A] poignant memoir piece by Ailsa Piper, ‘Old Growth’, recounts seventy being the new fifty, and the absolute privilege of growing older …and a marvellous memoir by Vicki Laveau-Harvie titled ‘A Vapour Trail Across the Sun’, …muses on her debut publication at seventy with her Stella prize-winning book The Erratics, her persistence, her writing life and what success has meant. (Review here)

Only one biography this month, and one that has been reviewed several times before, but not featured in the Round Ups since I’ve been doing them. Kate Grenville’s One Life: My mother’s story (2016) is the biography of her mother, Nance Gee. Jennifer Cameron-Smith writes: 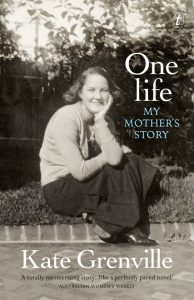 Those of us who are not related or part of Nance Gee (née Russell)’s circle of friends and acquaintances, would not have heard of her, except for the fact that she was Kate Grenville’s mother. And Kate, using the fragments of memoir that Nance left behind, has given us Nance’s story. ….By the end of the book, while I felt that I had a good understanding of the issues with which Nance grappled, and the times in which she lived, I didn’t know the woman at all…. And yet, I am glad I read this book. It’s a reminder of life during a tumultuous period of history, a reminder that there are many different aspects to one person’s life, a tribute to a woman who did her best. (Review here)