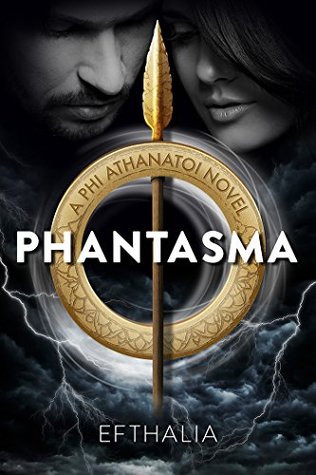 Hello and welcome to September’s roundup. Amazingly we had 19 books linked this month which is fabulous, especially when I’ve been really slack in reviewing and linking books myself lately, I’m glad to see everyone else is on top of it. This is a bit of a bumper issue as I couldn’t decide which ones to leave out.

First up is a book I’d heard about ages ago but completely forgotten, now my interest is re-piqued and I must look into hunting down a copy of it. Phantasma by Efthalia was reviewed by Eleni who says “With a title of Phantasma, I was already intrigued to read this story. Steeped in Greek mythology and Greek-American culture was another draw card for me. It didn’t disappoint. I was drawn into Carissa’s world. A world that went from the ordinary to the paranormal in one encounter. Vampires, demons, gods – all with a modern Greek slant”

Nadia L King, who seems to find the best books to read, read Indigo Owl by Charlie Archibold and said “I read Indigo Owl over a few nights and every night I dreamt of the story. Although sci-fi, dystopian young adult fiction is not usually my jam, I loved this book.” and “What I most enjoyed about this book was the fluid writing, fast-paced narrative, and vivid descriptions which perfectly captured the harsh, icy environment of Galbraith in my mind. Indigo Owl easily came to life for me, making this story engaging and entertaining with a welcome hint of romance. Themes of control, greed, and power made Indigo Owl a heady mix of Hunger Games and Neal Shusterman. I predict Indigo owl will be a big hit with YA readers and look forward to seeing it become a bestseller.”

White Fire (A Toni Delle Adventure) by Laurie Bell was reviewed by Veronica Strachan who says “Danger, betrayal, secrets, lies? Absolutely! Add to this sharp scifi, a snarky ship AI and a canine robot partner for a quirky agent with see-through skin and a whole head full of hangups. Now you have a great recipe for a fun and fast-paced read. The cast is small so we get to follow them closely through the action, twists, and dangers as they race to save the galaxy. The world-building is thorough and slick, giving the cast a wonderful backdrop for the action-packed plot. And there’s enough left hanging about some key relationships that I’ll be looking out for the next Toni Delle Adventure. A great read.”

Cass Moriarty reviewed Blackbirds Sing by Aiki Flinthart and said “There were probably too many characters for me to fully engage with any particular women with empathy, but overall the story paints a broad brushstroke of what women’s lives were like at that time, whether they were poor or rich – the expectations upon them, the restrictions around what they could and couldn’t do, the secretive plans they hatched in order to carry on their lives, the ever-present danger of being called witches, the implicit threat of childbirth as well as illnesses, the dangers of war and civil unrest, the power wielded over them by men, the bonds forged between women as they navigated their lives and the griefs and losses they endured along the way. There is plenty of romance and desire, and much to appeal to readers who like to immerse themselves in this historical period.”

The Last Migration by Charlotte McConaghy, is a novel I loved and so too did Theresa Smith Writes who said “This novel is a stunning literary achievement. It brilliantly captures the intersection between humans and wildlife, between devastation and hope. In a world on the brink of environmental catastrophe, even the ends of the earth is not too far. The Last Migration is Australian literature at its finest. I have been highly anticipating this one since I heard the author speak about it at this year’s Melbourne Writer’s Festival and it did not disappoint.”

This next novel is high on my list of books I want to read, The Mother Fault by Kate Mildenhall. This was reviewed by two people this month, Shellyrae@Book’d Out says “Part dystopian, exploring a plausible future of environmental ruin and Orwellian surveillance; part mystery thriller, with a dramatic and unexpected ending; all while exploring themes related to motherhood, marriage, and mental health, The Mother Fault is an intelligent and absorbing novel.” While Jennifer says “Mim and the children set off on what will be an arduous journey, undertaken at great risk to themselves and to others. Imagine: a world where the effects of climate change and of the threat of biological warfare are apparent; a world in which people are microchipped and their movements controlled. Imagine. Can Mim protect her children? Will she find Ben? This is an unsettling and uncomfortable read. Recommended.”

A Keyboard and an Open Mind reviewed The Blood Countess by Tara Moss (Pandora English #1) and was slightly disappointed, but it’s still one on my list I want to read one day. She says “You know when you really wish you enjoyed a book more than you did? Yeah, this was one of those. This is a series opener, and I have a feeling that now this book has done a lot of the setup, I could enjoy the subsequent books more. While I didn’t find this to be the most gripping YA paranormal, I haven’t entirely written off Pandora English just yet.”

I don’t preorder books very often, but this is one I did, though I haven’t had time to read it yet, Helen’s review makes me want to move this up the pile. High Spirit’s (A Dandelion Ponds Mystery #1) by Beth Prentice was definitely loved by Helen who said “You need to read this story honestly the characters are totally fantastic and Charlie and Daisy are a good sleuth team finding out what is happening and uncovering secrets that Daisy is stunned to know and although Daisy is a spirit her feelings for Charlie are growing by the hour, she is not sure how this is going to work. There are lots of twists and turns and the story is fast-paced. I loved it from start to finish and highly recommend this to anyone who enjoys a great story. The ending sets up the next book and left me wanting the next book in the series now, how long to I have to await MS Prentice?“

Ashleigh @The Book Muse reviewed The Fire Star (A Maven and Reed Mystery) by A.L Tait and says “What a bang to begin with. This introduction cements the ongoing characters, settings, and Maven and Reeve’s friendship and investigative skills powerfully and ensures that these themes and characteristics will be central to the rest of the series. Red herrings in this series are sure to be imaginative yet recognisable within the crime genre, and that work within the fantasy world. I thoroughly enjoyed this book and am very eager for the next one in the series, which I am sure will deliver with just as much oomph and gusto. A spectacular read for all readers aged nine and older.”

And lastly, but definitely not least, a book I preordered and picked up last week, I have been anticipating this novel for a year now and this is definitely my next physical book to be read. Ashleigh @The Book Muse was also waiting in anticipation for this novel to be released and was not disappointed. Hollowpox: The Hunt for Morrigan Crow (Nevermoor #3) by Jessica Townsend is described by Ashleigh as “A fun and fabulous read for fans of Nevermoor! Be sure to read them all in order!” She also says ” The world of Nevermoor is exquisite, and carefully planned out, whilst still being filled with the odd surprise that brings the magic out to play in new and intriguing ways.” and one of her favourite characters is a Magnificat called Fen.

I can’t wait to see what books are read next month. With only three months left of this year, I hope you get some great reading in. If you want to see all the books reviewed in September click here. Keep linking those books here.