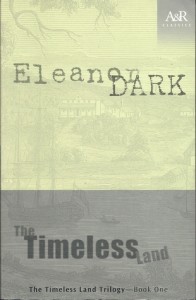 I started off last January’s round-up commenting on the difficult start to the year we’d had with smoke, terrible bushfires and some floods. Little did I (or we) know then what the rest of the year would bring! And it isn’t over yet. Just as well we have books to help us through the difficult times.

Thirty-nine reviews were posted for Classics and Literary books in January, several less than last January.

As for last January, we have Bill (The Australian Legend) and his AWW Gen 3 Week to thank for our good showing of TEN Classics reviews this month. Three of them were for novels by Eleanor Dark, a significant Australian writer, particularly of the 1930s and 40s, who won the ALS Gold Medal twice. The novels reviewed were Lantana Lane (by Emma of Book Around the Corner), The little company (by Buried in Print), and The timeless land (by Neil@Kallaroo).

I’ll focus here on our two non-Australian bloggers because it’s interesting to see what others make of our literature, particularly our classics. So, French Emma, who enjoys grappling with Australian writing and idiom, said of the farming story, Lantana Lane, that

Eleanor Dark has a great sense of humour and Lantana Lane is a comedy. She mixes irony and humorous observations. She has knack for comedy of situation. She writes in a lively prose, a playful tone, shows an incredible sense of place and a wonderful tendency to poke fun at her characters. She points out their little flaws with affection and pictures how the community adapts and accepts everyone’s eccentricities. But behind the comedy, the reader knows that this way-of-living is condemned.

Canadian Buried in Print found The little company, which she describes as set in a time of “political and intellectual crisis”,

relevant, surprisingly fresh. The idea of a “heavy, unhappy knowledge that in a disordered world you must, if you want truth, hunt for it, build it laboriously from a thousand tiny assembled scraps of data”. The “to and fro” and “the pull of unscrupulous propaganda”.

It is largely for these points of relevance that classics are worth reading!

Brona contributed three reviews to Bill’s week, one being the first for AWW of Katharine Susannah Prichard’s The wild oats of Han. She read it online, as a serialised story in Home magazine. Following the “to-be-continued” trail wasn’t easy, she writes, so in her post, she provides links to make it easier for anyone who follows her! Of the story itself, Brona starts this way:

The Wild Oats of Han is a delightful story of a childhood in retrospect. Written by an adult who is fondly remembering a wild, unstructured childhood growing up on a bush block in late 19th century Launceston. It sometimes had the feel of a disappointed/jaded adult looking back to a more innocent, idyllic and happier time, right up until the last couple of chapters.

The last one I’ll share with you is a completely new book and author to me (and to the AWW database), Isabel Dick’s Wild orchard, reviewed by Jennifer Cameron-Smith. The historical romance novel – a genre novel – was written in 1946, but is set in 1840 Van Dieman’s Land (Tasmania). It touches briefly on the dispossession of Indigenous Australians says Cameron-Smith. She enjoyed the read, saying that

while it glosses over some of the negative aspects of colonial settlement, it does not ignore them. It is an easy, heart-warming read, which left me wondering what might happen next.

The other classics reviews were:

This month’s most reviewed books are a varied bunch, but are all by award-winning authors.

Australian historian Grace Karskens won the Non-Fiction award in the 2010 Prime Minister’s Literary Awards for her history, The colony. Her People of the river, which was reviewed this month, has been shortlisted for the 2021 Indie Book Awards Non-fiction category. Our Challenge’s own historian, Janine (Resident Judge of Port Phillip) reviewed this book, which gives a history of contact on Dyarubbin (aka, Sydney’s Hawkesbury River region). Janine says that

The argument that she makes in both books is the same: that both indigenous and settler peoples were thrust into a new relationship with each other, in tension over the land.

She provides a detailed analysis of the book, concluding that it is:

a beautifully written book, that has its broad-ranging and yet detailed research interwoven on every page. It combines archaeological, ecological, local, spiritual research that keeps its focus on individuals, in the agency they possess, and the choices they make.

The book’s other reviewer, Denise Newton, knows the region well, unlike Victorian Janine. She praises the book too, describing it as

no lightweight or dry history text. It’s an incredibly comprehensive account, though the impeccable research is always conveyed with a deft touch.

Miles Franklin award-winning author Sofie Laguna’s latest novel is Infinite splendours. It was reviewed by two regulars here, Kate (booksaremyfavouriteandbest) and Theresa Smith (Theresa Smith Writes). Kate, who has liked Laguna in the past, found this book – yet another about a traumatised child from Laguna – disappointing, arguing that it “lacked warmth and hope, and that’s what I have come to expect from Laguna, even when she creates the most dire of circumstances for her characters”. Theresa Smith more or less agreed, though is a little more open about it, saying:

I kind of couldn’t wait to finish this novel, to be honest. But I couldn’t stop reading it either. My only advice with this one is to not be drawn in by the cover and to proceed with caution.

Indigenous Australian poet, playwright and novelist Kirli Saunders has been shortlisted for and/or won several awards, particularly for her poetry. Her verse novel Bindi was the inaugural winner of the WA Premier’s Daisy Utemorrah Award. Lauren (Underground Writers) and Nadia King reviewed it for the challenge in January. However, Tegan Edwards covered their reviews in her January round-up for the Challenge so I won’t repeat all that here. I will say though that this sounds like a special book – a verse novel for younger readers that deals with the environmental damage caused by bushfires, but that also, writes Lauren, provides “an opportunity to understand and learn from life-changing events”. Nadia King also admires the novel, commenting in particular on the simplicity and beauty of the language. I can tell fans of the novel that Saunders is working on a sequel!

The Indie Book Awards recognise and celebrate Australian writing. The shortlists are nominated by Australian independent booksellers, with the winners selected by expert judging panels. The three shortlists of most interest here are:

Fiction shortlist, but this year it comprises books only by men.

Non-fiction shortlist (3 of 4 by women)

Debut fiction shortlist (3 of 4 by women)

All have been reviewed for the Challenge, but we wouldn’t say no to more!

Two prizes turned out to be relevant to us, and both were won by the same book:

Victorian Prize for Literature and the Prize for Fiction: The animals in that country by Laura Jean McKay.