History Memoir and Biography Round Up: January 2021 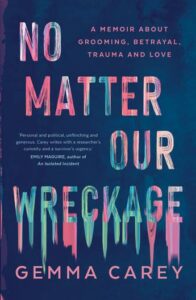 During January 2021 thirteen books were reviewed. Once again, several readers picked up books which have received positive feedback from our reviewers in the past. Griffith Review 68 Getting On received another review, this time from Sue at Whispering Gums, and Jacqueline Kent’s biography of activist Vida Goldstein, Vida: A Woman for our Time, was read and reviewed by Jennifer Cameron-Smith.  Reviewer Cass Moriarty read Sarah Krasnotein’s well-received The Trauma Cleaner, and Carolyn Scott read Stephanie Wood’s Fake. Jackie contributed an interesting review explaining how and why Caro Llewellyn’s Diving into Glass confounded her expectations.

Many newly published books were reviewed during January. As in other months, many of these were memoirs. Jackie reviewed Gemma Carey’s No Matter our Wreckage: A memoir about grooming, betrayal, trauma and love (2020). The author is an Associate Professor at the University of New South Wales, where she is the Research

Director for the Centre for Social Impact. Her academic work focuses on health and social inequalities, but this is a deeply personal story:

No Matter Our Wreckage is an introspective look at the tendrils that extend from grooming and child sexual abuse through the victim’s/survivor’s adult life and relationships, and the particular spanner that the death of a parent in an already fractured ‘family’ throws into that complex mess. …If you’re hoping for a nice tidy answer, this isn’t the book for you. Just as most victims rarely get at the truth of why people implicated in their trauma behaved as they did, No Matter Our Wreckage gives a realistic account of the way you often have to settle on a story that you can live with, constructed from fragments of information. (See review here) 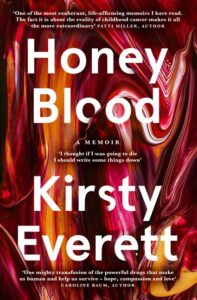 and she has been a motivational and educational speaker since the age of fourteen. Honey Blood (2021) is her memoir of childhood and adolescent leukaemia. Denise Newton wrote that:

Kirsty’s story is both awful and inspirational: diagnosed with leukaemia at the age of nine, her hopes of pursuing a competitive gymnastics career are instantly dashed. She describes the treatments she underwent in enough detail to immerse the reader in the world of the sick child; but we also read about the other, more normal aspects of growing up in suburban Sydney: sibling squabbles, school, homework, parents …Kristy’s story shows that the environments in which patients are treated – including the interpersonal and emotional as well as the medical – really do matter. (See review here)

Patti Lees lives in Mt Isa, has represented Australia in several United Nations Development Forums and is the 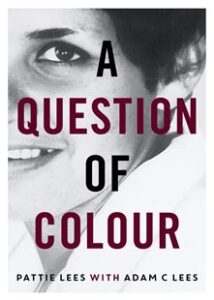 CEO of an Aboriginal and Torres Strait Islander Corporation. She is part of the Stolen Generation, taken from her mother at the age of 10 in 1960 and sent to Palm Island. She has co-written her memoir A Question of Colour with her son, Adam C. Lees. In her review, Jennifer Cameron-Smith wrote:

Pattie Lees was ten years old when she and her four siblings were separated from their mother on the grounds of neglect and placed into the care of the state. This is an important first-hand account of Pattie’s experiences as a ‘fair-skinned’ Aboriginal, a member of the Stolen Generations, caught between conflicting worlds. In Townsville, Pattie was considered ‘too dark’ to be successfully fostered, while on Palm Island, other children rejected her because she was seen as white. …I found this first-hand account deeply moving. Ms Lees acknowledges the good and the bad in her life. This autobiographical account is important, and I recommend reading it. (See review here)

All of these recently-published memoirs reflect trauma and distress of varying kinds. An older, rather different memoir is A Mouthful of Petals, co-written by Allan and Wendy Scarfe, who narrate the book in first person from Allan’s point of view, with Wendy spoken of in the third person. It was first published in 1967 and was re-issued in 2020 with a new epilogue. It tells of their three-year stay in the remote village of Sokhodeora in Bihar, India in 1960 at the request of India’s venerated political leader and activist Jayaprakash Narayan. They were asked to take charge of the educational activities in the ashram, but their activities spread far beyond that into logistical 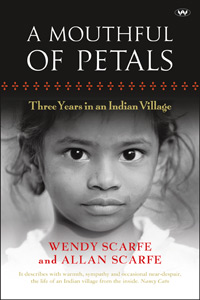 assistance in building classrooms and helping the villagers to access medical and pharmaceutical aid. In her review, Sue at Whispering Gums writes:

None of this was easy of course, and the challenge was exacerbated not only by the usual infrastructure problems – such as transport – but also by cultural and personal issues, particularly the challenge of engaging the villagers in an environment characterised by caste prejudice, gender inequality and inter-family quarrelling…Now, when I read a book like this, by which I mean a book that is about a different place and time – after all, we are talking India of 60 years ago – I think about its relevance (beyond any intrinsic interest in the subject matter) to my place and time. This book provided a few such points, one being the importance of education. …Then there’s the big point: the idea of having global responsibility for each other. …A mouthful of petals is a passionate book that still offers much to think about. It is well worth reading. (Review here)

The history aspect of the History, Memoir and Biography genre on our Australian Women Writers Challenge is often overshadowed by memoir and biography. But during January we had four history titles reviewed- and two of them were reviewed twice. Moving chronologically through the subject matter, the books range from the 16th century Mexican conquest, early encounters on the Hawkesbury/Nepean (Dyarubbin) River in NSW between indigenous people and white settlers, 19th century Launceston, and a series of crimes in 1930s Melbourne. 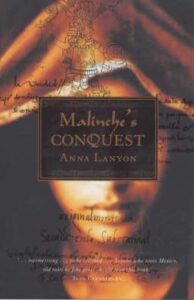 Anna Lanyon’s Malinche’s Conquest was published in 1999 and it won the NSW Premier’s History Award in 2000. It tells the story of Lanyon’s search for the Amerindian woman who translated for Hernan Cortes during the Spanish Conquest in 1521. Lanyon travels to Mexico, consults the archives and probes the folk stories in order to probe the representation of this iconic -for good or bad – historical figure. In her review, Janine at Resident Judge of Port Phillip wrote:

So who was Malinche, or as she is also called, Malintzin or Marina? She was a Nahau woman who acted as translator to the ‘conquistador’ Hernan Cortez. …She soon learned Spanish herself, and acted as Cortez’s interpreter, advisor, intermediary and lover. She is variously seen as traitor or victim, and her story has been incorporated into the La Llorona legend. …[This] is very much a travel/history amalgam but apart from some rather clunky dialogue with people she met on her travels, there is also considered, informed reflection on language, representation, memory and agency during first contact. (See review here)

Another contact history, this time in Australia, is found in Grace Karsken’s People of the River (2020). Janine at Resident Judge wrote:

This book, which has been shortlisted for many historical and literary prizes during 2020, is a companion volume to Karsken’s earlier book The Colony about early Sydney and the Cumberland Plains. The argument that she makes in both books is the same: that both indigenous and settler peoples were thrust into a new relationship 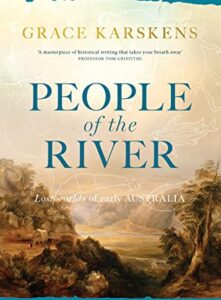 with each other, in tension over the land. …what comes strongly through this book is that both groups of people – white and indigenous – had had to make accommodations and changes. …This is a beautifully written book, that has its broad-ranging and yet detailed research interwoven on every page. It combines archaeological, ecological, local, spiritual research that keeps its focus on individuals, in the agency they possess, and the choices they make. (See review here)

Denise Newton, who was born and grew up in the region and returned later as an adult, wrote about this book:

This is no lightweight or dry history text. It’s an incredibly comprehensive account, though the impeccable research is always conveyed with a deft touch. ….If you, like me, enjoy learning more about the real history of our country, this is a must-read. I lingered over it for several months – it’s a hefty book at 525 pages (not including appendices) but such a joy. I finished it with a satisfying sense that I now have a better understanding of the corner of Australia that has been so personally meaningful to me. (See review here) 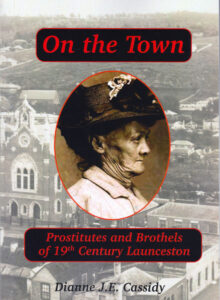 Yet another contact history- but  this time of a somewhat different, more intimate, kind (!!)- is explored in Dianne Cassidy’s On the Town: Prostitutes and Brothels of 19th Century Launceston (2020). Jennifer Cameron-Smith reviewed the book, noting that

Ms Cassidy draws on public records (usually from newspaper accounts) to write about the experiences of women who ‘lived on the town’ in nineteenth century Launceston. … Newspaper accounts only provide a partial story, of course, but those records have enabled Ms Cassidy to provide a social history of the lives and times of some of the women involved. (See review here)

Finally, two reviews were posted of Katherine Kovacic’s recent book The Schoolgirl Strangler (2021). Set in 1930s suburban Melbourne, this is a historical true crime story that occurred at a time when police had no experience with the phenomenon of the serial killer. In her review, Cloggie Downunder wrote:

Kovacic’s meticulous research is apparent on every page, but at no time does this make for a heavy read: the way the facts are fed into the narrative gives it the feel of a crime novel, never dry or dense; always interesting, moreso from the benefit of hindsight and modern psychiatric and psychological knowledge. (See review here) 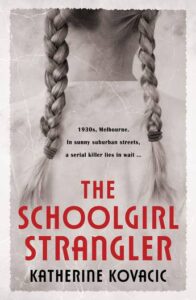 Drawing on newspaper reports, police records and court documents, author Katherine Kovacic lays out the particulars of each murder and the investigation into each crime in chronological order. I liked the structure Kovacic chose for this narrative though this is really only possible because of the unique path the investigation took …Kovacic presents a meticulous and astute account of a fascinating historical crime in The Schoolgirl Strangler, and I think readers of both the true crime, and crime fiction genres will find the narrative approach accessible and interesting. (See review here)

About: I’m Janine Rizzetti and I blog at the immodestly-named The Resident Judge of Port Phillip where I indulge my love of reading, podcasts, history and seeing films and exhibitions just before they close. I am a historian, interested in Australian and colonial history, officially retired but more occupied than I thought I would be with my local historical society, playing with grandchildren, learning Spanish and now playing ukulele!