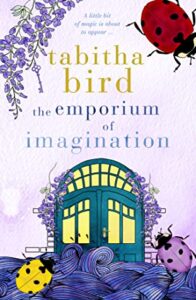 Interesting! March seems like a big reading month for the challenge. In 2019, 2020 and again this year, we had over sixty reviews for literary fiction and classics posted to the challenge, significantly more than the preceding Februarys. Why is this? Is it that autumn comes down under and we all think about hunkering down? Whatever the reason, it’s great to see.

Now though, on with March’s report. As usual, awards announcements made over the last month are at the end.

Marvellous March because once again it produced a bumper crop of reviews, 67, but not one of these was for a classic! I think we wore our classic selves out in January and February, but I’m sure they’ll be back? Anyhow, the usual stats …

No classics this month! But, I’m keeping this heading as a reminder to us all that we love having reviews for classics!

With Tabitha Bird’s The Emporium of Imagination being March’s “most reviewed” book, it seemed appropriate feature literary speculative fiction this month. Like all our genres, here, this one is broad-ranging – from traditional SF and fantasy, through to magical realism, cli-fi, and all sorts of, dare I say it, weird and wonderful books. Those that find their way into my “literary” corner tend – though this is not de rigueur – to be genre-benders, because that is often the way they break away from the mould.

Reviews for The Emporium of Imagination came from Ashleigh Meikle (The Book Muse); Brenda Telford (GoodReads); Carolyn Scott (GoodReads); Cass Moriarty (GoodReads); Dark Matter Zine (review and interview); Shelleyrae (Book’d Out); Theresa Smith Writes. I can’t possibly share all of these, so if you are interested, please check them out. Regular reviewer for us, Ashleigh Meikle, starts with a brief overview of the book, saying “Tabitha Bird’s second novel is an exquisite and touching foray into grief and its impacts through the lens of magical realism”. The setting is a fantastical shop in the real Queensland town of Boonah. Ashleigh describes the novel as “evocative” and “unique”, which closely matches Theresa Smith’s description as “remarkably unique and truly inventive”. It is assessments like this – unique, inventive – that takes this book out of “straight” genre into something else. Nalini of Dark Matter Zine agrees with Ashleigh and Theresa. Like them, she loves that this book about the pain of grief is also “full of hope and joy with full recognition of life’s pain and turmoil”. Indeed, all the reviewers loved – not just liked – this book. So, if, like me, you are not a “big one” for speculative fiction, this could very well be a crossover one for you.

Another speculative novel reviewed this month is Jane in love by Australian filmmaker Rachel Givney. Cloggie Downunder reviewed this time travel novel which speculates a romance for Jane Austen, no less, in the twenty-first century! Cloggie suggests that this is not a book for Jane Austen purists – which may indeed include me! – but I am tempted by her assessment that it’s “a book for people who love Jane Austen and who are grateful that she stuck with writing her books instead of becoming a diligent nineteenth-century wife”.

The last speculative novel reviewed this month that I’ve chosen to discuss is … well, read on under my next heading …

To take part in the AWW Challenge, you need to read books by Australian women, and, preferably, review them in a place accessible to others. In most cases, this means posting reviews on individual or group blogs, or social media platforms like GoodReads. Indeed, many of our participants post their reviews on GoodReads. However, you may not be aware that it is also possible to post a review on Instagram. This is what this month’s top reviewer kt-elder (ktbookbingo) does. So, to give you an example, I’ve chosen her post on a speculative fiction book, Charlotte McConnaghy’s The last migration.

This novel can, it seems, be classified as dystopian or cli-fi or eco-fiction, with kt using the term eco-fiction in her review. The point I want to make here is that although Instagram is primarily a site for sharing images, kt has harnessed it for reviews. Her reviews are short(ish) but in them she provides a brief description of the book followed by an assessment which, in the case of The last migration, includes a succinct discussion of the structure, plot and characterisation – and, of course, whether she liked it! She did – saying:

The Last Migration is not something I’d usually read, as eco-fiction isn’t usually my thing. If you’re in the same boat then this is the book that will see your interest renewed. However, if you’re a fan of eco-fiction then it will grab you hook, line and sinker.

Three Awards announcements were made over the last month, and there were a few books that popped up more than once: Kate Grenville’s A room made of leaves; Nardi Simpson’s Song of the crocodile; and Jessie Tu’s A lonely girl is a dangerous thing.

The three categories of most interest here are:

Literary Fiction Book of the Year (3 of 5 by women)

All, except Jess Scully, have been reviewed for the Challenge.

The Christina Stead Prize for Fiction (All by women)

Multicultural NSW Award (All by, or involving, women)

We do not yet have reviews for Rawah Arja’s and Cath Moore’s books.

Last month I noted that Louise Milligan’s Witness, which exposes the horrors of being a complainant in a sexual assault case, had not yet been reviewed for us but, thanks to Maureen Helen, it now has! She bought it specifically because it was on the Stella Prize shortlist! Good one, Maureen. She has written a thorough review, and was greatly impressed, concluding:

I could not put the book down. It informed, educated and entertained me. It prompted me to think in different ways. I am even more concerned now about the treatment meted out to victims of rape and other forms of sexual abuse. My ideas about justice in the legal system have been upset. Again.