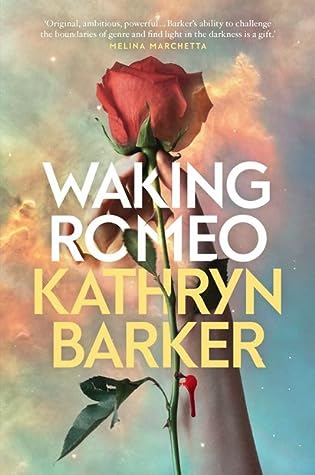 Nearly halfway through the year already, and May was a big month for speculative fiction with 28 books reviewed which is just fabulous. This is a longer round-up this month and I still haven’t been able to cover them all.

Mic Loves Books and I, Claire’s Reads and Reviews both reviewed Waking Romeo by Kathryn Barker. Mic says “Waking Romeo is complex and original; it is definitely thought-provoking and it won’t be leaving my mind any time soon. It brought characters that I know and love to life in a whole new light, and Baker changed their stories enough to make it her own without taking anything away from the classics in the way that she used their stories for inspiration. There were a couple of amazing twists that I hadn’t thought about and they just added to the intrigue and enjoyment. Baker has included aspects of all time periods in the novel and they all fit, nothing feels out of place and her message is timeless. If you like science fiction and a heavy dose of dystopia but still appreciate the classics I think you could really enjoy this one, I certainly did. The time travel took some getting used to and working out the rules was no walk in the park because they kept changing, kind of like real life I guess. Waking Romeo is a fantastic read if you want to completely escape reality and can absolutely suspend disbelief to get lost in an alternate world where technology took over and much of humanity’s need to get to the next better thing ruined civilisation. I loved it, and I would actually love to read it again to see what else I could take from it – but I also want to read it again for the first time so I’m still struck by its unique nature.”

My thoughts were “There is a lot to get your head around in this novel, especially the jumping back and forwards in time, the different timelines and how they play out, the memories and Jules’ story, but if you go in with an open mind then you’ll be in for one hell of a ride. This would have been a five star read if it hadn’t been for the final couple of chapters where for the first time I did struggle to get my head around the time travel/ consequences aspect, but I will get this out of the library again and reread those chapters, and hopefully, it will all become clear. I loved the way the author has played with Shakespears story, but not only Shakespear but another classic author, Emily Bronte for who Ellis was the inspiration of her classic story. An ingenious novel.”

Ashleigh from The Book Muse reviewed Stealing Time by Rebecca Bowyer a book I have to finish reviewing, she says “It is the kind of book that is easy to read, yet makes you think, and that could also be one that you spend time with as you try to unwrap everything that is happening in it – narratively, socially and politically, as well as ethically. One could say that the main characters have no or looser morals, and act in ethically adjacent ways – they’re trying to help people for the right thing, but they have to operate underground and away from the law. This is a book that can show what might happen in a society that starts to value productivity over a good, balanced life. The core message of the importance of family and friends over the laws of productivity. It will hopefully show that productivity is not the most important thing in life, and that everyone, regardless of their age, can be productive and contribute to society in their own way. This is a thought-provoking book, and one that will open up all kinds of conversations about the future and everything touched on in this book.”

Ebony from Underground Writers reviewed Snow White Rose Red and Other Tales of Kind Young Women by Kate Forsyth she says “it is the perfect introduction to lesser-known tales. It presents its readers with a unique insight into the oral and documented history of each piece, and how they have evolved within the public domain. This collection features an array of bright young women who take agency in their stories and remain fearless in the face of temptation. With a focus on confronting adversity, Forsyth and Carrington inspire their readers with the message that kindness is the true display of courage.”

Brenda Telford reviewed Ice Wolves (Elementals #1) by Amie Kaufman she says “Ice Wolves is the 1st in the Elementals series by Aussie author Amie Kaufman and it was brilliant! Yes, it’s middle grade, but it’s intense, fast-paced, thrilling and magical. The transformation from human to wolf was intriguing and well described, the same for the scorch dragons. Fire and ice – weapons of choice – dragons and wolves. I can’t wait to read the next in the series. Highly recommended.”

The most reviewed book during May was middle-grade novel A Glasshouse of Stars by Shirley Marr which I am seeing everywhere. Jess from Underground Writers says “The magical realism adds an element of mysticism so that you’re not always sure which parts are imagination and which parts are real. This may be confusing for some readers, but overall helps reinforce the sense of what it’s like to immigrate to a new place. Everything is new, everything feels different, and reality feels blurred. Marr makes the familiar feel unfamiliar and vice versa throughout the story, lending to a sense of displacement. This coming-of-age story is an excellent gateway for parents and teachers to start conversations with children about the impact of bullying and the simple ways in which we can show empathy. While meant for a younger audience, there is a definite benefit to older readers, as many of Meixing’s difficulties stem from interactions with her elders. There is a tenderness to the writing, which is beautiful and vivid and lends comfort amongst the anxiety. It’s as if Marr is saying ‘it’s going to be okay’ even as the story makes you feel like it can’t possibly end well. A Glasshouse of Stars is a timely and important read.”

Cloggie Downunder says “With her quirky and courageous characters, her wonderfully evocative prose and her infusion of magical realism, Shirley Marr conveys, to those Australians who have safely grown up inside their comfort zone, the experience of trying to assimilate into a new country, one with a different language, a different climate, different food, customs and culture, one far away from family and friends and everyone who looks and thinks like you do. And she does it brilliantly. This is a topical and important book for readers of all ages.”

Ashleigh @The Book Muse says “This touching story about immigration, family and survival shows that there are a multitude of immigrant experiences within Australia – Shirley Marr shows us Kevin, Meixing and Josh in this novel, but specifically Meixing. There is a constant sense of uncertainty and fear about the new home, and being able to adapt, made worse for Meixing by the expectations that she will understand right away. I truly felt for Meixing.  I wanted to reach out and help her with everything I could and be her friend. She was so sweet, and when she became friends with Josh and he helped her, I was overjoyed.

Nadia L King says “This OwnVoices story of migration lays bare the racism and violence that migrants may experience, but Marr contrasts this with lightness, also showing that people can be kind, caring and understanding of the migrant experience. One of my most favourite elements in A Glasshouse of Stars is the thread of magical realism woven throughout the story. Marr gives us a house called Big Scary whose physical structure reflects the emotional state of her characters. I love the cat in a tuxedo who acts as a gatekeeper to the magical glasshouse in the garden that contains galaxies of possibilities. A Glasshouse of Stars touches on healing and growth. And ancestral spirits make an appearance in line with Marr’s Chinese heritage. A Glasshouse of Stars is a wonderful middle-grade novel told with bravery and sensitivity. Marr has brilliantly captured a child migrant’s experience, and I confess to being excited about what Marr will write next. I predict this to be my favourite read of 2021!”

After those reviews, it is definitely one I must pick up.

Jennifer reviewed Borderlanders by Gillian Polack “I enjoyed this journey, especially the sentience of the house, the imagery of the library and the views through some of the portals. Perhaps I should have been afraid at times, but I felt sure that, like all my favourite childhood fairy tales, there would be a happy ending. I discovered a new word, as well, which I hated on sight, and will try to avoid hereafter: ‘suckitude’. Recommended for readers of contemporary fantasy.”

Eleni was super busy during May, she reviewed two books by Kerri Arthur Hunter Hunted (#3 Lizzie Grace) and Darkness Hunts (#4 Dark Angels) both of which she rates highly. She also reviewed two books from Anna Hackett’s Hell Squad series, a series I’ve been wanting to get to for ages, Reed (#4) and Roth (#5) as well as For the Love of a Goblin Warrior (Shadowlands #3) by Shona Husk another author whose books I enjoy, I must get to this series sometime too. She also reviewed a novella, Dane’s Redemption by Susannah Kade and  Fast Forward by Juliet Madison, a book I loved when I read it a few years ago.

To see all the other fabulous books reviewed during may go here.

It’s great to see such a wonderful array of speculative fiction this month, keep reading and reviewing and link your books here.

Until next month, happy reading.