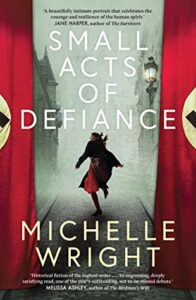 Halfway through the year, and that darned pandemic just keeps throwing us curve-balls, doesn’t it? I hope – wherever you are – you are trucking ok. How great that we are all readers, that we have something to take us away to other lives and worlds whenever we feel like it. And, it looks like many of our participants are doing just that.

Actually. I don’t think June was particularly joyous – lockdowns in Melbourne, lockdowns in Sydney, and various border closures, topped off by cold weather – but calling it so, helps! June’s figure of 41 reviews is the same as June 2020’s, and 7 less than last month’s. These reviews were for 33 different books.

As always, I’m leaving this heading here as a place-holder to remind us all – me, in particular. So, in lieu of reporting on reviews of classics, how about looking at a book that riffs on a classic (albeit not an Australian classic)? The book is Kathryn Barker’s Waking Romeo, so you can guess which classic we are talking about! Reviewer Claire (Claire’s Reads and Reviews) describes it as a time-travel, dystopian and romance novel built on a classic – but wait there’s more! This novel is also an homage to a second classic, Emily Bronte’s Wuthering Heights. Claire says:

There is a lot to get your head around in this novel, especially the jumping back and forwards in time, the different timelines and how they play out, the memories and Jules’ story, but if you go in with an open mind then you’ll be in for one hell of a ride.

The first one will surprise you, as it did me, as it is the Wolf Hall companion by Lauren Mackay! Wolf Hall, you ask? Yes, because as you’ve probably guessed, the author is Australian, though she now resides in the UK. Reviewer Brona (This Reading Life) says she will be passing on her Wolf Hall trilogy novels, but will be keeping this! The book is comprehensive, providing background both to the period in which the books are set and to Mantel’s evocation of it in her books. To find out all that such a companion includes, read Brona’s review. Her assessment is that it is “Highly recommended for fans of the trilogy and lovers of literary companions.”

The other book comes from Black Inc’s Writers on writers series, and was also reviewed by Brona! The book is Michelle de Kretzer’s On Shirley Hazzard. Brona has read two from the series, which now comprises 9 books, as have I, and what we’ve noticed is that they vary greatly in how the writer chooses to approach their writer. Brona says about her two: “Earlier on this year, I read Josephine Rowe’s On Beverley Farmer. It was a very literary affair. De Kretser’s book is more conversational and more casual in tone”. The two I’ve read focus particularly on one novel by the writer being written about, but apparently not so Kretser who, writes Brona,

takes time with each of the novels to discuss their themes and her personal reactions, along with various snippets about the writing process and Hazzard’s writing techniques …

I love Hazzard and de Kretser, so this is certainly going on my TBR.

Two lesser known Awards announced made announcement in June. Unlike last month there were no overlaps, which is not surprising given one is broadly focused award, and the other a narrowly focused British one.

We may not have always reported on this award that is managed by the Foundation for Australian Literary Studies at James Cook University. Like the Stella prize it is not limited by genre (but unlike the Stella it is for all genders!) It is for “the best book published in Australia which deals with any aspect of Australian life”. The women in the longlist are:

Just in case you are interested, the winner was announced in June, and it was a British woman, Hilary Mantel’s The mirror and the light.

All of the above (for both awards) have been reviewed for the challenge, but only Pip Williams’ The dictionary of lost words this month. There were two reviews, both by GoodReads reviewers. Jennifer Cameron-Smith wrote:

What can I say about this remarkable novel? I have been intending to read it for ages and once I picked it up, I could not put it down. While I knew a little about the development of the OED, I had not paid as much attention to the society it was set within.

An absolutely remarkable book. Who has the imagination, creativity and skill to write an entire book about the creation of an English dictionary? Or rather, who has all these and the ability to make it something you actually want to read – or devour – in my case?

It is still on my TBR. Yours?