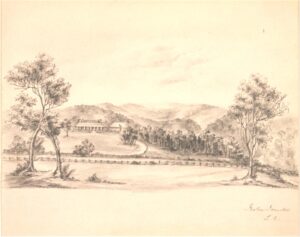 If the earliest women writers who lived in and wrote about Australia were correspondents, diarists and journal writers, among the earliest must be Mrs Elizabeth Fenton (1804-1875). Her journal, titled The Journal of Mrs. Fenton: a narrative of her life in India, the Isle of France (Mauritius), and Tasmania during the years 1826-1830, was published posthumously in London in 1901. (An online digitised copy can be found here.) In 1829, Mrs Fenton was left to give birth in Mauritius while her husband travelled to take up a post in “Van Diemen’s Land”. Months later, still nursing an infant daughter and eager to reunite her family, Fenton gained passage on the ship, Denmark Hill. The following extract, the first in our “Stories from the archives” series, describes with novel-like detail some of the people Fenton encountered prior to her boarding, and also gives a humorous glimpse of “literary women” – and their detractors – in her day.

June 23rd [1829]. – I have at length ascertained that we sail on the 27th, and am just returned from visiting my accommodation on board. It is dreadful, but must not be thought of now, – indeed, I never before even saw such, this being my first introduction to a vessel without a poop. Yet for this gloomy den I must pay as much as we did for our beautiful cabin on board the Hamoud Shaw. There is as much difference for the worse between the Mahomedan and the Englishman. N’importe. I have one stern cabin, Messrs. Burnett and Betts the other; Mrs. Hughes the side cabin next mine; some pariah the opposite one, and two or three others disposed of ‘the gods know where.’

I left Mrs. Hughes in charge of Flora [her baby daughter]; so, as the morning was enchanting, I had time to enjoy our sail into the bay, conveyed in Mr. Saunders’ pretty boat. It was so exhilarating, I almost regretted so soon to reach the Denmark Hill, my prison in prospect. The old captain received us; he was short, square, dingy of hue, with an awful squint. But the best part of the entertainment was yet to come, in the introduction of his lady wife. She was tall, passée, but by way of being dashing withal, and seeing Mr. Saunders to be a handsome young man, was, I suppose, calculating on him as an agreeable passenger, so showed off after her fashion in high spirits, assisted no doubt by the conscious dignity and captivation of an enormous lilac gauze toque – she hung out signals of distress in the shape of a cabinet piano, guitar, etc., affirming she could not exist without her comforts.

Oh, that you could see, or I justly convey to you an idea of the pair; very loving too, and novel from my long separation from anything resembling the English vulgar. However, being informed that Mrs. F. was the first authority on board, Mr. Saunders, like a wise general, began his operations to gain the lady by many compliments on her taste, etc. etc., which took good root. He impressed on her that the Colvilles were much interested in my welfare, and that I had many influential friends in the Island whose good opinion would be secured by attention to my comfort.

After his oration, her complaisance seemed unbounded, and he took advantage of it to point out all the arrangements he wished to have made, directing where such baggage as I had then ready to put on board, should be placed.

Well, we behaved extremely well, and took a ceremonious leave of this exemplary couple. I do not say that we did not, when fairly off, indemnify ourselves for our restraint by one long and lasting laugh – almost till we landed.

I found a messenger at George’s Street with a very kind letter from Lady Colville, saying that as I could not go to her, she would come to me, and intended to be at Government House early next day …. Even my maternal vanity was more than satisfied by her admiration of Flora. She repeatedly called her the loveliest baby she ever saw, with an earnestness that confirmed her sincerity – indeed she is not the kind of person to talk only for a fashion of speech.

There were several strangers, among the number Captain Lyons commanding the Jasper, a very pleasing person, and most polite in offering any assistance of his sailors or boats, besides his nautical experience in preparing my cabin. I told him I had felt some uneasiness at a report of the Denmark Hill being in an unsound state, not seaworthy, as sailors term it. This point he promised me should be immediately put at rest, and that he would call at George’s Street to report to me the next day. Dr. Hart was also present, and declared himself my especial knight errant.

I then sat for two hours with Lady Colville; she had put up some of Georgianna’s warm clothing, in case my own stock should run short, and most kindly offered me many comforts, which had formed part of her own supplies from England for the voyage. I need not tell you that with real regret and some tears I parted from this very kind and interesting lady….

On my return to George’s Street, before I had seated myself, the Thompsons’ carriage drove up. Running downstairs I met them at the door, but instead of speaking they held up their hands, with other demonstrations of surprise, to see me fashionably dressed. – ‘You surely sin against yourself,’ said he. After a little conversation with them, other visitors presented themselves, Mr. Burnett and Betts; the former, tall and gentlemanly in deportment, seemed rather silent, but Mr. Betts, who in the course of the conversation contrived to let me know he was married, has a great deal to say on all subjects, and says it well. To each of the party Van Diemen’s Land was terra incognita, and we all compared our opinions and anticipations….

While dressing for dinner I heard our already large family party had been increased by a Captain and Mrs. —–, two children, and negresses and bandboxes ad libitum. Captain —– seemed a staid, quiet man, not very young; his lady, about five-and-twenty or so, was like ten thousand fair ladies, the boast of happy England, – neat, quiet, fair – what else I know not, but ‘fashionably dressed’ will fill up the space.

One thing amused me, that there were five babies upstairs under three years old, and at each cry, each mama turned pale and declared it must be hers, and then all simultaneously rushed out to see whose number was deficient; sweet Louisa Saunders, a privileged pet at the dinner table, whose long, fair ringlets, according to the French fashion, had never felt the scissors, looked like an old lady among the other babies in arms.

24th June. – . . . It was with much satisfaction I found from Captain Lyons that I might go on board the Denmark Hill without any apprehension. We sat a long time, and during his visit several others arrived, among them Mr. Denny. But one anecdote I must make room for. At dinner, at which he was a guest, there was some conversation about Mrs. Telfourd, who, Lady C. once before said, inked her fingers to seem literary! The stranger, Mrs. —–, bestowed rather a sweeping condemnation on all the ‘blue’ ladies, adding, She hated to meet them, they were all intolerably stupid. ‘What!’ said Mr. Denny, ‘do you really say so?’ ‘Yes,’ rejoined the lady. ‘All so disagreeable? What, not even except Mrs. Fenton?’ I so sincerely supposed he meant a jest – though one of unpardonably bad taste – that I laughed very heartily, and told him I wished the cause had been left in other hands, not exactly knowing why I was to be champion for the Muses. I noticed while we spoke that Mr. Saunders whispered Mrs. —–, who turned from red to blue and averted her eyes from me. After we left the dining-room she disappeared, and was still absent when Mr. Saunders inquired where she was, adding, He concluded she was afraid of being in the room with me. I hardly knew which, to laugh or be angry, when he said he had asked her after Mr. Denny’s oration, ‘if she had not been informed Mrs. Fenton was an authoress!’

Oh, how I wanted Sophia then to laugh with me, for I do suppose some one who has seen me scribbling away at this ‘Letter’ has pronounced me ‘preparing for the press!’ Well, some people get the reputation of learning on very easy terms.