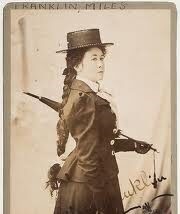 Original 1945 introduction: “Dr. H. S. Conby, visiting U.S. literary figure, recently warned us that no nation without us own national literature can be understood by other peoples, nor can it even understand itself. In this article the Australian author, Miles Franklin ‘Old Blastus of Bandicoot,’ ‘All That Swagger,’ etc. makes a challenging analysis of the present place of writing in our national culture.”

WHEN I went abroad a generation ago to indulge in life and literature in the United States, I was often asked to compare the two countries. I used to say that Australia was a little girl with pigtails and America a grand young lady with her hair up and out in society in one of those décolleté gowns, with the squeezed waist and long train, which was the ambition of normal little girls in that day.

The same comparison can still be applied to our literatures. The United States has become one of the two biggest going business concerns in the world, with books, in keeping.

Even at this far extremity of the globe you can procure in the book-shops to take two plain examples Marquaud’s ”H. M. Pulham Esquire” and Steinbeck’s ”Grapes of Wrath.” These novels are widely different in subject matter and treatment, but both portray phases of American life so vigorously and actually that as soon as you open them you are in America, among the American people, in a way that I demand and enjoy in novels.

WHEN I first reached the United States, Edith Wharton and her master, Henry James, were still dominating the literary scene. The genteel were still looking to Europe for real culture and striving to get the cracker barrel out of their literature. Not so long before, one of the first-class magazines had pointed out that it was foolish to try to produce crudely in America a product that could come to them in barrels so much cheaper and of infinitely better quality from the publishers of Edinburgh, which reigned in that day.

The two streams of literature, the English and the native, were then contending in the United Suites, but since then they have combined. It is of an achieved condition that Benet wrote.

The homesick man begot high cheekboned things
Whose wit was uttered with a different sound
And Thames and all rivers of the kings
Ran into Mississippi and were drowned.

And such lines as “The cleft dust was never English dust” and “The catbird pecked away the nightingale.”

At that same time Mancy Bird Turner was writing that beautiful sonnet about high tide in the Thames which ends: “And never this hour comes brimming to its height / But, slow and deep an answering pulse begins / In all the lonely waters of the world.”

This poet could write of England with such passion after all the generations even centuries, in the new world. So what is to be expected here after so few decades. English literature is our joint heritage through language Shakespeare and all the English giants belong to North America and Australia, and always will be ours. But there must be something more, something growing from different elements.

Here we are still back in the Jamesean period. Our genteel and pretentious still look abroad and hope to get the gumtree out of our literature instead of put properly in.

The academic honours all the enthusiastic praise go to expatriate writers or to those who write best in imitation of the parent literature. Sneers are kept for those too crudely indigenous and any enthusiasm on the part of the critics is directed to dwelling on faults.

This is natural. Such career writers and critics have not yet made the transition and are more at home with the familiar English models and their reproductions.

THE great world crisis must affect the prospects of our literature Australian literature so far is always in a state of becoming it is not yet fully come. A recent United States visitors says we are still in the stage of cultural backwardness that existed in the United States when Dickens wrote “Martin Chuzzlewit.”

In this crisis the little girl is in danger of losing her pigtails not through them being put up, but through becoming held.

Our publishers are in a panic. They tell us that Australian literature is doomed. They will not be able to publish it any longer. There is no interest in Australian writing locally and if there were it still would not pay, because the population is so small. There is no interest in Australian literature universally because it deals with such remote situations and people. It is to be swamped by both English and American products. American and English books are better per se, the stuffing in them is much more interesting to everyone – including Australians – and they are so much cheaper because the Americans for instance have such super machines and cater for such large numbers that pouf! they can toss off thousands of copies merely on the exhaust to flood us.

Well Australian authors are used to ordering themselves lowly and reverently to all their financial betters so perhaps they are not so shocked as the publishers who will have to engage in some other business to maintain themselves in that state of life to which publishing has hitherto called them.

There is another menace. A leading American publisher and some Hollywood producers are instituting a public opinion poll to find out what the public wants. They are going to find but just what constitutes best-sellers. Then Big Business is to be bigger and businesser than ever and manufacture best-sellers by the Gallup recipe.

But there’s one, thing that Big Business has overlooked, and that is that it can do everything in the world to exploit a drama or a novel except write it.

The function of the literary artist is to express the unfetterable and seeking soul of man. and thereby keep a few airholes open for the aspiring side of the human race; to be shriven, the literary artist must resist mental totalitarianism, whether it enthrones the business man or too fervently exalts the proletarian.

WHAT can Australia do in the face of the flooding menace? We have been chosen, like some far and primitive cannibal island as a dump. There may be other possibilities. Publishing, in many cases, is something of a gamble. Another American visitor amazed by our State lottery, suggested that we should improve our education system and raise all our taxes painlessly by State lotteries. So perhaps we could have some two-up schools to save writers from starvation!

Some of our writers, of course, will have luck (like winning a lottery) and be taken overseas. One or two may be so gifted that they will present Australia in a way that will be true here and accepted abroad. One or two more may be so great as to write as they please, regardless of consequence, and eventually please the universe. Others will conform and prosper.

CONTINUING in literary metaphor, we have no great, rivers of population to drown the rivers of the kings. We haven’t any rivers at all – but we have some mighty, patient, persistent creeks. Think of the courage of the Murray, starting in the hills not so far away from here and meandering across those vast widths; think of the Lachlan and the Darling coming to meet it across the plains, sometimes getting lost in the dust, but keeping on and on until they reach the sea.

This land – environment – will inevitably get itself into our national literature. It is a long, slow process. The kookaburras have laughed at the whitening bones of many a man lost in our inland wilds, and many literary bones will be left there too, before this earth is really won in literature. But that will come.