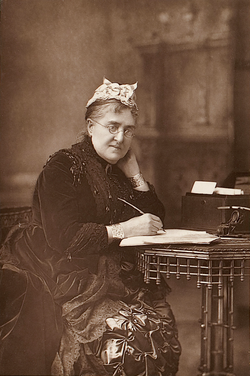 Frances Emily Russell nee Robey (1846 to 1899) wrote novels as “Mrs H E Russell” and nonfiction columns as “Eucalypta”. In a rare essay published using her married name, she argues against the anti-feminist views of well-known British Victorian novelist, Eliza Lynn Lytton (pictured left; a portrait of Russell has yet to be found).

I should like to combat, as briefly as possible, some of the main argument employed against this question, although, as a rule, I find that objections to the granting of the suffrage to women are based either upon entire ignorance or an utter misapprehension of the real state of the case. Few people have thought at all upon the subject, others dismiss it as unworthy of discussion, while many consider it an occasion for ridicule. But the thinking man or woman knows that subjects like these cannot be settled by idle jests. Such mirth is like the crackling of thorns beneath the pot; the crackling will shortly exhaust itself, but the fire that they have only served to kindle will burn on. For my own part I have never been able to discover any real argument against the enfranchisement of women, and feel that a time will come when men will wonder what could have so distorted their mental vision that they should have refused to [our] sex one of the first principles of liberty – the right to self-government. I cannot help thinking that the real objection in the minds of men to the granting of this privilege is their assumption of feminine interiority. Once let them realise their equality, and they will no longer wish to withhold it. This, in fact, has been the whole history of the movement. Whenever and wherever intelligent men have been brought into contact with intelligent women the fabric woven of distrust and opposition has faded away. The woman’s claims have been recognised, and harmony and mutual co-operation have succeeded. The intelligence of the few rather than the prejudice of the many, has always been enlisted on the female side.

I suppose many of those who really interest themselves in this question will have read Mrs. Lynn Linton’s article in the Nineteenth Century on what she is pleased to call the “Wild women as Politicians.” In this clever but most unwarrantable attack on her own sex Mrs. Linton has summarised most of the arguments commonly used against the suffrage. As this paper has attracted a good deal of attention and is considered by uninterested persons as unanswerable, I propose to traverse some of the statements made therein and to criticise them from the opposite point of view. Mrs. Linton begins by speaking of those men who, obeying the call of reason and of justice, have enlisted themselves on the female side as “women-lovers to the point of self-absorption and idolatry;” as “having that large carelessness of good nature, that indifference of self-confidence which makes the giant submit to the dwarf;” or, “consists of those effeminated worshippers who wrap themselves round in the trailing skirts of the idol and shout for her rights, because they are not virile enough to respect their own.” These (she goes on to say) are specially the men who uphold the imposture of the new morality.

Mrs. Linton has said a great many cruel and bitter things about women in her various articles on social subjects, but I think that in the passages above quoted she has hit the other sex still harder. At the same time, were I a man I think I should be content to stand side by side with those who have been the first to support the just claims of women to political equality with themselves. For amongst them we are proud to enumerate such names as those of Thomas Henry Buckle, John Stuart Mill, Herbert Spencer, Lord Salisbury and Sir Henry Parkes, besides hundreds of others of only lesser note because contrasted with those who have gone before. “These and many like them are the men whom Mrs. Linton stigmatises as “not virile enough to respect their own rights, effeminated worshipper who wrap themselves in the trailing skirts of their idols, etc.” The true answer to such a statement is the motto of our league, “The woman’s cause is man’s.” They rise or fall together – dwarfed or god-like, bond or free.”