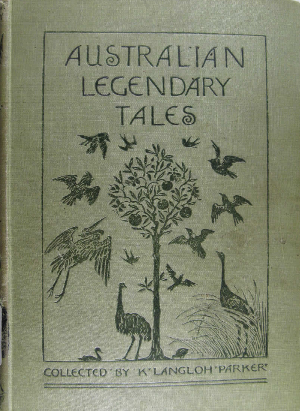 Barbarians did the dreaming of the world, poetry arose in their fancies, and poetry, in spite of facts and science, resolutely refuses to ‘follow darkness like a dream.’ Mrs. Parker’s collection demonstrates that, amongst the world’s dreamers, the Australians, just escaping from the Palaeolithic Age, were among the most distinguished.
(Andrew Lang, quoted by Katharine Susannah Prichard in her essay, “The Aborigine in Australian Literature“.)

Katharine Susanna Prichard’s work is still in copyright, so the following text by Mrs Langloh Parker has been chosen to represent an aspect of her interests.

A neighbour of mine exclaimed, when I mentioned that I proposed making a small collection of the folk-lore legends of the tribe of blacks I knew so well living on this station, “But have the blacks any legends?” – thus showing that people may live in a country, and yet know little of the aboriginal inhabitants; and though there are probably many who do know these particular legends, yet I think that this is the first attempt that has been made to collect the tales of any particular tribe, and publish them alone. At all events, I know that no attempt has been made previously, as far as the folk-lore of the Noongahburrahs is concerned. Therefore, on the authority of Professor Max Müller, that folk-lore of any country is worth collecting, I am emboldened to offer my small attempt, at a collection, to the public. There are probably many who, knowing these legends, would not think them worth recording; but, on the other hand, I hope there are many who think, as I do, that we should try, while there is yet time, to gather all the information possible of a race fast dying out, and the origin of which is so obscure. I cannot affect to think that these little legends will do much to remove that obscurity, but undoubtedly a scientific and patient study of the folk-lore throughout Australia would greatly assist thereto. I, alas, am but an amateur, moved to my work by interest in the subject, and in the blacks, of whom I have had some experience.

The time is coming when it will be impossible to make even such a collection as this, for the old blacks are quickly dying out, and the young ones will probably think it beneath the dignity of their so-called civilisation even to remember such old-women’s stories. Those who have themselves attempted the study of an unknown folk-lore will be able to appreciate the difficulties a student has to surmount before he can even induce those to talk who have the knowledge he desires. In this, as in so much else, those who are ready to be garrulous know little.

I have confined this little book to the legends of the Narran tribe, known among themselves as Noongahburrahs. It is astonishing to find, within comparatively short distances, a diversity of language and custom. You may even find the same word in different tribes bearing a totally different meaning. Many words, too, have been introduced which the blacks think are English, and the English think are native. Such, for example, as piccaninny, and, as far as these outside blacks are concerned, boomerang is regarded as English, their local word being burren; yet nine out of ten people whom you meet think both are local native words.

Though I have written my little book in the interests of folk-lore, I hope it will gain the attention of, and have some interest for, children – of Australian children, because they will find stories of old friends among the Bush birds; and of English children, because I hope that they will be glad to make new friends, and so establish a free trade between the Australian and English nurseries – wingless, and laughing birds, in exchange for fairy god-mothers, and princes in disguise.

I must also acknowledge my great indebtedness to the blacks, who, when once they understood what I wanted to know, were most ready to repeat to me the legends – repeating with the utmost patience, time after time, not only the legends, but the names, that I might manage to spell them so as to be understood when repeated. In particular I would like to mention my indebtedness to Peter Hippi, king of the Noongahburrahs; and to Hippitha, Matah, Barahgurrie, and Beemunny.

I have dedicated my booklet to Peter Hippi, in grateful recognition of his long and faithful service to myself and my husband, which has extended, with few intervals, over a period of twenty years. He, too, is probably the last king of the Noongahburrahs, who are fast dying out, and soon their weapons, bartered by them for tobacco or whisky, along will prove that they ever existed. It seemed to me a pity that some attempt should not be made to collect the folk-lore of the quickly disappearing tribe – a folk-lore embodying, probably, the thoughts, fancies, and beliefs of the genuine aboriginal race, and which, as such, deserves to be, indeed, as Max Müller says, “might be and ought to be, collected in every part of the world.”

The legends were told to me by the blacks themselves, some of whom remember the coming of Mitchellän, as they call Major Mitchell, the explorer of these back creeks. The old blacks laugh now when they tell you how frightened their mothers were of the first wheel tracks they saw. They would not let the children tread on them, but carefully lifted them over, lest their feet should break out in sores, as they were supposed to do if they trod on a snake’s track. But with all their fear, little did they realise that the coming of Mitchellän was the beginning of their end, or that fifty years afterwards, from the remnant of their once numerous tribe, would be collected the legends they told in those days to their piccaninnies round their camp-fires, and those legends used to make a Christmas booklet for the children of their white supplanters.

I can only hope that the white children will be as ready to listen to these stories as were, and indeed are, the little piccaninnies, and thus the sale of this booklet be such as to enable me to add frocks and tobacco when I give their Christmas dinner, as is my yearly custom, to the remnant of the Noongahburrahs.

Prichard, Katharine Susannah, “The Aborigine in Australian Literature“, in The British Annual of Literature 1939: 49-53.