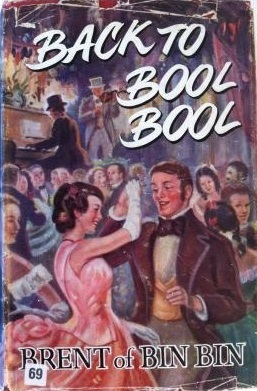 Brent of Bin Bin made a stir in the 1920s and thirties when ‘his’ family saga of life in the High Country of southern New South Wales came out. Altogether, six books were published under that name, without Brent’s identity, although often accurately guessed at, being known for sure until the 1960s.

Miles Franklin (1879-1954) was probably almost in despair as a writer when she made the decision to publish under the pseudonym Brent of Bin Bin. By the late 1920s she was nearly 50 years old. The ground-breaking My Brilliant Career she wrote as a teenager had come out in 1901 to great acclaim and popular success but the intense scrutiny it brought upon her family and neighbours had led her to withdraw it from re-publication. Her next two novels,The End of My Career (1902) and On the Outside Track (1903), brilliant attempts to explore the relationship between ‘real’ and fictionalized life were rejected by her publishers. Following them, Some Everyday Folk and Dawn (1909) met little success and her next, The Net of Circumstance (1915) under the silly pseudonym Mr. and Mrs. Ogniblat L’Artsau, none at all. And since then there had been nothing.

Born into the squattocracy, Australia’s landed gentry, she had been dragged down by her father’s unwise venture into farming, and her parents’ failure to secure her a decent education. After some years working with the women’s trade union movement in America, before moving to England during WWI and seeing war service in Serbia, she had been barely clinging to the bottom rungs of the lower middle class in England during the Depression doing clerical work and writing in her spare time. With the mss of at least four completed and unpublishable novels ‘under her bed’ she made the no doubt unpalatable decision to tone down the feminism and experimentation in her writing and to adopt her topics to mainstream taste – family sagas of the Australian bush. In other words, she decided to man up, and how better to do that than to adopt a male nom de plume.

In 1900 Franklin had written to Blackwoods, the publishers of My Brilliant Career:

Please on no account allow “Miss” to prefix my name on the title page as I do not wish it to be known that I’m a young girl but desire to pose as a bald-headed seer of the sterner sex.

That wish had been thwarted by Henry Lawson’s description of her in his Preface as “just a little bush girl, barely twenty-one” but now she was in control and the secret of Brent’s real identity, known only to herself, her best friend Mary Fullerton and a smallish circle of family and friends, although guessed at by half the industry, was still being kept beyond her death in 1954, so that Marjorie Barnard in her biography published in 1967 could only point to the clear similarities between Franklin’s and Brent’s work as proof that they were one and the same.

In fact ‘Bin Bin’ was the name of a station (large grazing property) belonging to Franklin’s father’s family which she used for the first time in My Brilliant Career (“My father was a swell in those days – held Bruggabrong, Bin Bin East and Bin Bin West, which three stations totalled close on 200,000 acres”).

Further, her deception of her publishers, Blackwoods, was double or even triple, as she not only acted as Brent’s agent under the pseudonym Miss S. Miles or Mills, later clarified as Sarah Mills [her real full name was Stella Maria Sarah Miles Franklin], but also claimed that the author was ‘William Blake’, a member of an old Australian squatting family who wished to be known as Brent to distinguish him from the Romantic poet of the same name who had died a century earlier.

Early in 1927 ‘S.Miles’, as agent for Blake, submitted a draft of Up the Country, ‘a Novel of the Australian Squattocracy’ to Blackwoods. Their prompt acceptance included the right of first refusal on the next two or more works. In June, Franklin returned to Australia, to care for her ageing parents in Carlton, Sydney, and began typing out the final draft in the Mitchell Library. Over the space of a few months of amazing productivity Franklin knocked out Up the Country, the first draft of Ten Creeks Run and began working on Cockatoos, a rewrite of the unpublished On the Outside Track  as the third novel in a family saga based loosely on the arrival and establishment of her mother’s family in Australia over 3 or 4 generations.

Blackwoods brought out Up The Country, Ten Creeks Run and Back to Bool Bool in fairly short order as a ‘trilogy’ to good reviews and moderate sales, but there things stalled. The Depression made all business difficult; Prelude to Waking, a Mayfair comedy originally written in 1925, which Franklin was obstinate in wanting published next, is very different stylistically to  the other five books in the series, and shares no characters or families with them; and then there was the War (WWII).

The most prominent of the initial reviews was in the Bulletin of 2 Jan 1929. Headed ‘An Australian Classic’, the review said that although Brent had no style as understood by literary cliques it contained some of the most tender writing in Australian literature (Roe, p.301). Likewise, HM Green writing later said, “The Bin Bin books are not works of art, but extracts from life or stories of life.”

After the War, Beatrice Davis of venerable Australian publishers Angus & Robertson (who famously had refused My Brilliant Career back in 1900) purchased the rights from Blackwood and over the course of half a dozen years, brought out all six, starting with Prelude to Waking in 1950 and reissuing Up the Country in 1951. Unfortunately, Miles Franklin did not live to see the publication of the final book in the series which she had been writing, re-writing and tirelessly promoting for a quarter of a century.

Meanwhile, during the period of her initial success as ‘Brent’, Franklin had published under her own name Old Blastus of Bandicoot (1931), similar enough in style and location to reconnect her with the public who had not forgotten My Brilliant Career (To coincide with the release, Nettie Palmer published an important essay comparing Franklin with South Africa’s Olive Schreiner)*. She followed up with a forgettable murder mystery in the style of Dorothy Sayers, Bring the Monkey (1933) and then her popular triumph, the Prior Prize-winning All That Swagger (1936), a saga based on her father’s family and very much in the style of Up The Country. According to one of the judges, “In not one page is there to be seen any evidence of overseas influence. Only an Australian could have written it, and there has been nothing written like it except the Brent of Bin Bin novels.”

Miles Franklin’s best/most innovative writing was done when she was young – My Brilliant Career, The End of My Career/My Career Goes Bung and On the Outside Track/Cockatoos. Her ‘middle period’ as she struggled with the opposing ideas of sexuality and purity – for men as well as for women – resulted in some pretty well unreadable books, including Prelude to Waking. Her conversion to Bush Realism – she claims that she and Steele Rudd founded the ‘Pioneer’ school of writing – beginning with Up the Country, allowed her to write freely once again, without too much in the way of plot, just stuff happening, in the high country that she loved.

The books are all available as ebooks on Amazon but if I were rich I would reissue the five connected Brent of Bin Bin books (not Prelude) as a boxed set and I’m sure with a bit of advertising (and a movie deal?) they would regain their rightful place at the centre of Australian Bush writing. .

*Nettie Palmer’s essay ‘The “Olive Schreiner” of Australian Literature’ was published in the Illustrated Tasmanian Mail, 16 June 1932 (Roe, p.331) and has been republished by Vivian Smith.