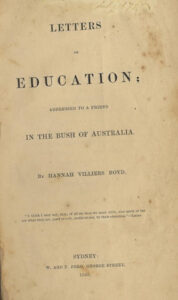 Hannah Villiers Boyd emigrated from Ireland to Australia in 1841. She wrote two books, including a series of letters on the instruction of young ladies in remote Australia, published in 1848. The following passages are extracted from the first letter.

I regret to tell you, in reply to your letter of the 6th instant, that I have been unsuccessful in my efforts to obtain a governess for you. I have, according to your wishes, advertised; but none of the ladies who have answered the advertisement are willing to go so far into the bush. Three hundred miles from Sydney is a distance sufficient to terrify the most courageous, as it involves the idea of bad roads, travelling by mail cars, uncomfortable inns, and all the other annoyances attendant on a journey to the interior; with the difficulty of finding an escort back to Sydney in the event of not liking the situation. You ask my advice relative to sending little Fanny to school, I unhesitatingly counsel you not to do so. You would subject yourself, in parting with her, to much anxiety on her account; as you could not hear from her so frequently as you would wish; and in the event of her illness, what a length of time must elapse before you could be with her! Besides, she will be growing more companionable every day; and as you are forty miles distant from any neighbour, you can hardly afford to give up even the society of a child. Not but that I am aware how much you would sacrifice your own feelings for her advantage; but in my opinion you can advance her education quite as well without undergoing the pain of a separation. Why not become her teacher yourself? I anticipate you will reply, “My education has been deficient, I had not the opportunity of learning many things which I wish Fanny to know.” In answer to this, I would say, there is one principle in teaching, which should never be lost sight of, viz. – any person who knows a little of any thing, may teach that little to those who know less…

I often think that you and other ladies, scattered over the wilds of Australia, resemble mother Eve when she was driven from Paradise. How many ladies are there in the old world, who have nothing more to occupy them than Eve had in the garden of Eden. They need never make use of either their hands or their feet. They have plenty of money, and plenty of servants; they need never do any thing but select from a variety of delicious food, and eat it; they may lounge on sofas, ride in carriages, or be carried about in palanquins; they can feast their eyes with beautiful sights, and their ears with heavenly music. They have also his Satanic Majesty constantly tempting them to pluck forbidden fruit, in other words, to break some law of God or man, the consequences of which will be banishment from that society of which they are perhaps the brightest ornaments; and how well he succeeds amongst the wives and daughters of the British aristocracy, the newspapers of England, alas! too frequently inform us. Ladies, on the contrary, in the bush of Australia, who cannot get servants, must frequently eat the bread of industry, as Eve was obliged to do after the expulsion. In some respects, however, they are in a more enviable position than she was. They have Manchester weavers to manufacture their calico, &c.; Paisley spinners to make their working cotton; and American planters to cultivate raw material. They have also Birmingham manufacturers to make their scissors, thimbles, and needles, so they have nothing to do when they want clothing but to exchange their wool for some material more suited to their taste, and sit down, cut out, and make garments; whereas poor Even must have found her leafy covering frequently very uncomfortable. They have also ships and sailors to bring them various other comforts from all parts of the world, and drays to convey them to their doors. But in bringing up their families, how superior are their advantages! Eve had no nice books to help her to instruct her children; whereas the Australian ladies have the experience of the old world, for nearly six thousand years, at their command, if they will only read…

Boyd, Hannah Villiers, Letters on Education: Addressed to a Friend in the Bush of Australia (Sydney: W and F Ford, 1848) – links to Google Books