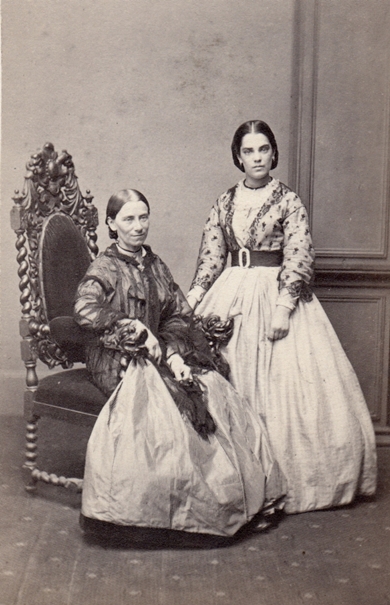 While searching in the AustLit database I sometimes come across an intriguing entry where the gender of the author is given without any other biographical details. Such is the case with “E. C. Morrice”, aka “E Charles”.

E C Morrice doesn’t come into the “overlooked” category: there are 58 works listed, comprising 46 poems and 12 short stories. A quick check with the Colonial Australian Popular Fiction Digital Archive provides a further six stories and novellas. But still no biography.

To Trove I go to undertake my by-now familiar routine of detective work.

A search for “by E Charles” turns up the first useful clue. Entries for two of the novellas, The Rightful Heir and Under the Southern Cross, identify “E Charles” as a “Mrs Walter Morrice”. Also I notice the stories appear mostly in regional newspapers of NSW, in the Bowral-Goulburn area south of Sydney. When I look up “Mrs Walter Morrice”, I find a family notice for the marriage of a son of a “Mr and Mrs Walter Morrice, of Browley, Moss Vale” – a town near Bowral.

So far, so good, but hardly conclusive. There are quite a few “Morrices” in that area, as I discover when I check NSW Births, Deaths and Marriages – and no Morrice brides with the initials “E. C.”

Back on Trove, I discover a series of births in the 1870s and 80s to “the wife of Walter Morrice” “at her residence, Browley, Sutton Forest” – another location not far from Bowral. A check with NSW records show I’m getting closer: several children were born to an “Elizabeth Charlotte” and “Walter Morrice” in Berrima, a township also in that local area.

Elizabeth Charlotte: “E. C. Morrice.” This has to be our author, surely?

I widen the search. A probate notice in 1943 cites the will of “Elizabeth Charlotte Morrice, late of Edgecliff near Sydney”. Could there be two people with that name? Another check gives me the following: “Morrice – October 29, 1941, at Edgecliff, Elizabeth Charlotte, widow of the late Walter Morrice, late of Browley, Moss Vale, aged 90 years.” It has to be her! And her age of 90 gives her birth year as 1851 or thereabouts. But why is there no marriage record for an Elizabeth Charlotte and Walter Morrice in the decades prior to the birth of their children in the 1870s?

The death record for Elizabeth Charlotte Morrice, late of Edgecliff, gives her father’s and mother’s names as Frederick and Henriette Julie, but NSW – unlike Victoria – doesn’t record the birth family name of the deceased. Walter Morrice’s death record in 1918 shows his parents as “John” and “Jane”. I go back to Trove; a search for “John Morrice” reveals what I’ve been looking for:

“F” must stand for her father Frederick, right? And the place of marriage, Switzerland, explains why I can’t find any local marriage record.

At last I have a birth name to give to our author: Elizabeth Charlotte Bingmann.

As Elizabeth Charlotte Bingmann was already married when she came to Australia, I don’t expect to uncover any publications under that name. Nevertheless I do another search on Trove and find two photos held by the Berrima District Historical and Family History Society, both of Elizabeth Charlotte Bingmann and her mother Henriette Augusta, the first from 1860 and the other from 1866. 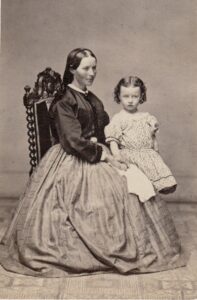 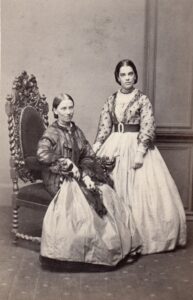 I laugh aloud with delight at this discovery. The prints are wonderful, real Victorian era beauties. I write to the Berrima Historical Society and Linda, the kind archivist, gives me permission to use both images here.

As for making further discoveries, I’m out of luck: I find no works for “Elizabeth Charlotte Morrice”. Still, my early searches for “E Charles” and “E. C. Morrice” have uncovered a few items to add to the author’s list of “works by” – including a series of short prose pieces on wildlife, a couple of short stories and poems, and a work of criticism.

I look back at what I’ve discovered so far and realise with dismay all the evidence I have for my assertion that “Elizabeth Charlotte Morrice nee Bingmann” was the author “E. C. Morrice” and “E Charles” is circumstantial. Despite it seeming very likely, I’ve found no indisputable proof that I have the right person. Worse, the publication place for her volume of selected poems was Melbourne… Have I correctly identified the author? How can I know for sure?

I’m about to give up when I realise there’s one combined search I haven’t done, that for “Mrs W Morrice” and “authoress”. Success! On 20th December 1884, the Bowral Free Press and Berrima District Intelligencer posted the results of a Christmas Story competition. While the competition sought to identify the “best original Australian Christmas story”, sadly it attracted only four entries, but a work by a “Mrs W Morrice, Browley, Moss Vale” was one of two stories selected for publication. Her entry? “The Rightful Heir“, the beginning of which was published in that same issue.

Now to select one of her many works for our “stories from the archive” post on Friday. Given the floods we’ve been having here in New South Wales this past year, I think I’ll choose one with a drought.

“True Till Death”, a romantic short story by “E Charles”, will appear on Friday.

Elizabeth Lhuede had poems and short fiction published in the 1990s while working at Macquarie University as a tutor and research assistant. She took a break after completing her PhD, and returned to Macquarie later to teach English and Creative Writing. More recently, Elizabeth instigated the Australian Women’s Writers Challenge and, under the pen-name Lizzy Chandler, has had two e-novellas published with Harper Collin’s Escape imprint (romance and romantic suspense), one of which has been anthologised in print.