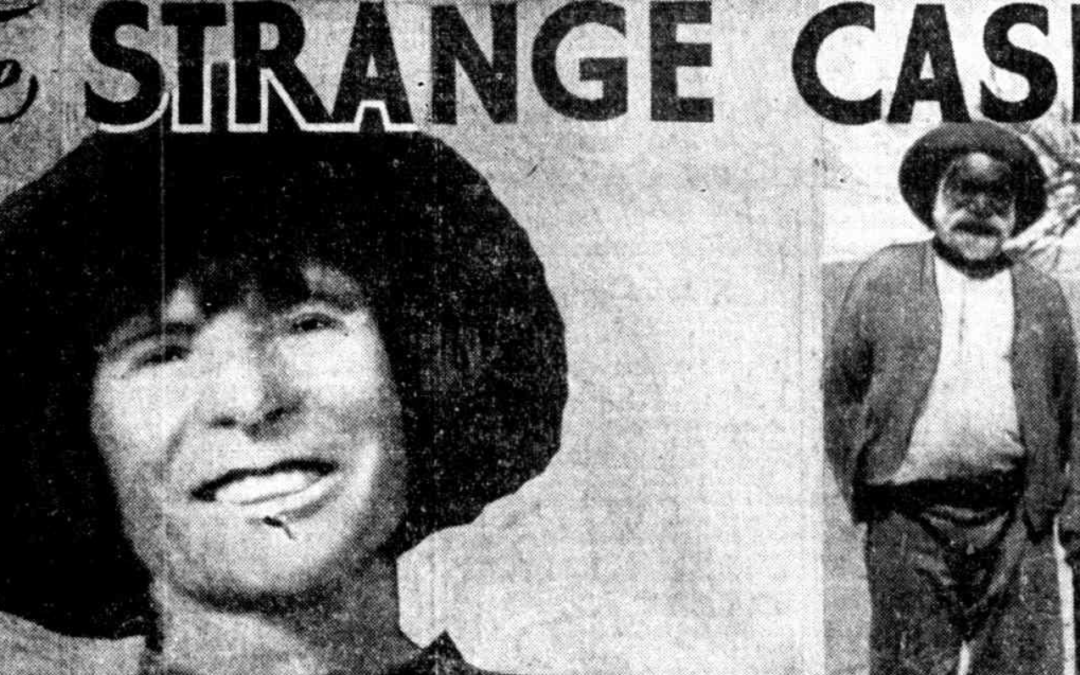 For her journalistic piece, “The Strange Case of Mrs Widgety” (1933), Ernestine Hill travelled to the Flinders Ranges, South Australia, and interviewed Mrs Becky Forbes, an English woman who emigrated to Australia and married an Aboriginal Australian. According to Hill, she was “the only authentic case to date of a white woman ‘living black’ with the wandering tribes of Australia”. The story appeared in 1933 in Brisbane’s Sunday Mail. As it is still in copyright, only an extract has been given here.

I FOUND [Forbes] living on blacks’ rations in the centre of the camp, in a ramshackle wurlie of kerosene tins and flapping bags, a cheerful and active-minded little soul with twinkling brown eyes and very white teeth. In a welter of dogs and billy-pots, with a skinned rabbit hanging on the tree, she welcomed me pleasantly, and there in the tin humpy, with her swarthy little son as witness, recounted the remarkable life history here told for the first time.

“Mrs. Forbes” is an English-woman. “My name before my marriage was Becky Castledine, I am 54, years old, and I come from Greenwich, where they tell the time,” she told me laughing. “Although I was born at Bow, within sound the bells, the whole of my early life was spent right in the shadow of the big Observatory.”

With her uncanny blending of vivid phrase and “blackfella lingo,” let her tell her story herself.

“Life’s a lottery,*’ she says. “It was my fate to marry an Australian aborigine and to spend my life in a blacks’ camp. I have never regretted it. They are a free, good-hearted people, and in all my 18 years among them I have made no enemies. Sometimes they get annoyed and I have to stand the racket.

“My old man died last year. He was always a good husband. I have never married before and I shall never marry again.

“He was a New South Wales boy from the banks of the Darling, a fencer and horse-breaker out along the stations, and no horse could chuck him when he was a young fella. He was about the last of his tribe, the Billadapa I think it was, but of their tribes and totems I’ve never taken much notice…”

The full text of Hill’s article can be found online via Trove here.