R McKay Tully, The Power of a Child (short story) 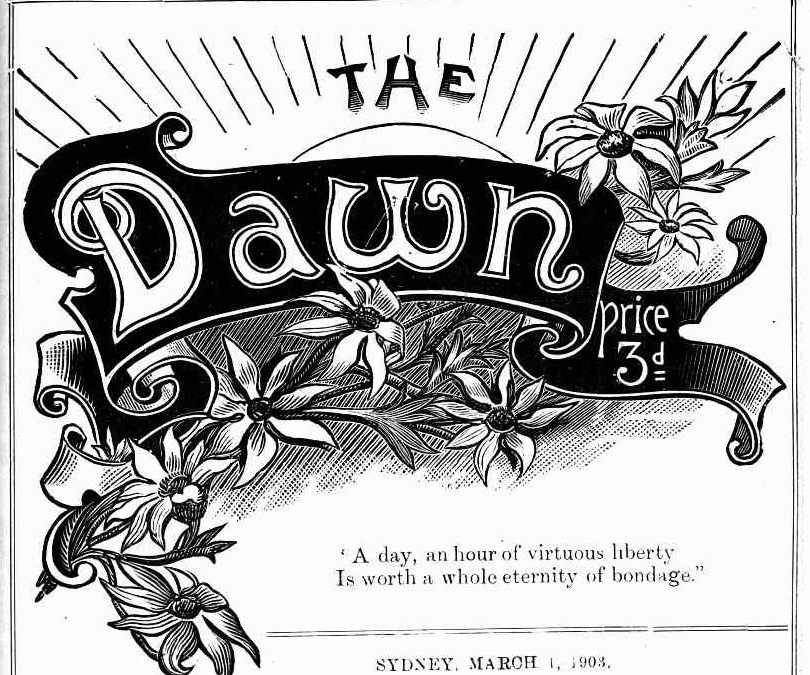 Having given up working the land after many years of drought, a man loses his way in the outback. This short story first appeared in 1903 in The Dawn.

“High noon, not a cloud in the sky,” quoted Ted Morris as he staggered out of the dense scrub sandhill to the scalded flat at its foot, quite oblivious of its foot, quite oblivious of the fact that it was 4 o’clock and long past noon; and no wonder that he was, for there was no abatement of the intense heat of that blazing, burning, blinding summer’s day. A day that is scarcely bearable under a shady verandah with plenty of cool drinks at hand, and killing too – as Lawson says – “He who pads the hoof” bundle on hack, and oft-times dry water-bag in hand.

The said bundle, though it usually consists of nothing more than half a blanket and a strip of unbleached calico, much in need of washing, to protect it from the burrs, still seems a burden to be borne.

In addition to these articles our friend carried a small pea rifle; all he had to show for five years’ hard graft on an out-back homestead lease.

Five years ago he and his wife had been seized by that land hunger which has proved the downfall of so many who are attracted by the large tracts of land that can be taken up in the Western Division; not realising that half, or less than half, the area is of much more value inside, where seasons are fairly certain and markets near. They had started with good prospects. The land was fertile enough; they had a fair amount of capital to expend on their lease, and plenty of that most essential quality – grit. But the seasons were dead against them from the first, droughty year succeeding droughty year, which killed most of his stock after vain efforts to keep them alive with scrub, and leasing other paddocks. At last, when his scrub was done, and he had no money left to rent country, and when he could not borrow any more money on a property already mortgaged up to the hilt, and there was no hope of warding off the final crash any longer, he sent his wife and children away to his old home, he only remaining to fix up matters a little. He left the mortgagees to fight over the dry bones of his high hopes as they liked, and taking only the afore-said rifle and swag was following his family. Not having money enough for coach or train fare, he had perforce to do the journey on foot. Travelling late the night before to avoid the heat, he had wandered off the but faintly defined road on to a poison-cart track, dis-covering his mistake as the scrub became thicker and thicker. It was no use to go wandering on in the darkness, so he scraped away the top sand, and not bothering to undo his swag, lay down with it for a pillow and was soon asleep.

The morning invasion of flies awoke him ere the sun had risen.

Road, there was none; but he knew in which direction he wanted to go. So, guided by the bushman’s compass, he started. No pleasant travelling did he find; the scrub grew thicker and thicker every yard; the heavy, half intoxicating scent of the dead and dying pines, pulling by long months of draught, filled the hot air and made his head ache. As he brushed past, their slender leaves crumbled into fine dust, and, penetrating inside his thin loose-necked shirt, caused him great irritation. Flies buzzed around in thousands. His feet, unaccustomed to much walking, especially on the yielding sands, became scalded and swollen; his water-bag gave out, for he had been so sure of striking a tank early in the morning that he had not husbanded his supply the night before. To make matters worse he was not now so sure that he would be able to extricate himself from the scrub ere too late; for summer heat and thirst take but a short time to do their work. Altogether his state of mind when he at length saw the flat spreading before him, and on its further side the copi (or gypsum) sprinkled banks of a tank glittering in the sun, can be well imagined.

Half hidden among the wire and lignum bushes near the tank was a boundary rider’s hut. From it to the bank ran a footpath. This he followed and drank deeply of the muddy but cool water; drank too much in fact, for instead of refreshing him it made him feel ill.

He had dropped his swag under a tree by the side of the path, and now returning sat wearily down on it, ill alike in mind and body.

Visions of the past flitted before his mind’s eye. Of the hopeless tussle with fortune that he had just passed through, and of the dreary outlook for the future.

At a time of life when men naturally look forward to a life of ease, having worked hard all their youth, here he was landless and moneyless; all the struggle to be fought over again without the buoyant hope of youth to help him on.

“Is it worth while?” he soliloquised, “to continue the struggle? Why not end it all? The means are at hand.”

Against the tree leaned the rifle he had carried. He drew it towards him and laid it across his knees. Then he put his hand into his trouser pocket and pulled out some cartridges and rolled them aimlessly about in the palm of his hand.

“So small,” he thought, “but yet one planted in a vital part would be a swift and sure solution of all my troubles. So small they surely would not hurt much; a momentary pang and all would be over. Those who cared would be none the wiser. My body would be found and buried as many another waif and wanderer is buried out back – with a kindly ‘Down on his luck, poor chap,’ from the men who laid me to rest.”

So absorbed was he in his gloomy thoughts that he did not notice a toddling figure coming down the path towards him until a tiny hand was laid on his knee and a pair of big blue eyes, full of the earnest, innocent trustfulness of early childhood, looked into his downcast face.

“Whose daddy is ’ou?” piped a lisping tongue.

With a rush of blinding tears came the thought of his own youngest son. Just such another golden haired laddie as this, who would even now be looking for Daddy’s return, and how that bright face would sadden if Daddy never came home again.

The wondering eyes looked still into his. “Has ’ou got a poor boy?”

The corner of a dirty little pinafore is lifted and the tears, blessed tears that are washing the bitterness from his heart, are gently wiped away.

“God bless you,” brokenly murmurs Ted, as he gathers the child in his arms. And ere he carries the truant back to his mother he throws his rifle far into the tank, resolving that come what might he will take up the burden of life once more and fight it out until the end.

Let us hope with greater success than heretofore.