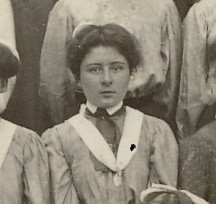 The following short story, written by Lesbia Vennor Harford (née Keogh), was written when the author was only 11 years old.

“Angel, darling, you must play outside this afternoon.” The child at the door of the homestead, with its great cool verandah shielding the large, darkened rooms from the heat of the summer sunshine, rose slowly and moved towards her mother.

“Please let me stay,” she entreated, “it’s so nice and cool here, and I won’t make a noise.”

“I’d rather you did go, darling,” said the mother, “it will be far more cool and pleasant once you get into the bush.”

“But I’ve got the whole clearing to cross first,” objected Angel.

“I’m tired and I want to rest,” in a more decided tone, “you know I have not been able to sleep for the last few nights.”

But Angel had still another complaint to bring forward. “But you are always tired now, and you scarcely ever do sleep.”

Her mother was fast losing patience.

“Marguerite,” she said, with most unwonted severity; “I wish you to go out, so get your sunhat and go at once.”

Angel was astonished. Never in all her ten years of life had her mother called her that. She ran into her bedroom, “Mama never called me that before, I wonder if it is one of my names; I’ll have a look in the Bible.” She stood on a chair and reached down a book from the top of the high wardrobe in which her dresses were kept.

After a long inspection she discovered that neither she nor any of her three sisters were named Marguerite. Suddenly an idea seemed to strike her. “It must be mother’s first little girl,” she said, half aloud. “The one who was lost so long ago.” She looked and found that it was so. Then she put the book hastily back in its place, and tying on her sunhat as she went, stepped on to the verandah, and took the path towards the bush. “When out of sight of the house she turned off into a smaller track, and following it she soon came to a small clearing in the bush.

Angel sat down on a moss-grown stone at the foot of a gum tree and began to think. A slight noise startled her, and she looked rather anxiously to see who had penetrated to this, her favorite retreat.

Two beautiful children of about her own size were sitting on a low limb of a tree near by.

Angel looked at them indignantly. “I’m not any younger than you are,” she said, “and my name is Angel.”

The children laughed heartily, such a pretty, merry laugh, like the tinkle of little silver bells.

“We knew that before,” they said, “and we are older than you, our names are Life and Happiness. Those are our mothers over there.” Angel looked where they were pointing, and saw two women.

“My mother is called Death,” said Life; “and mine Sorrow,” said Happiness; “people love us and dread our mothers; it is so strange.”

In a short time Angel was playing merrily with the two beautiful children, and Sorrow and Death stood side by side and watched them.

“Ah, little Angel,” said Death, “Thou art almost too happy, but perhaps it is better so, Sorrow will visit you so soon.”

“What do you mean by that?” Angel said.

“I mean that in a short time a great sorrow will come upon you which you will remember to the end of your life. But stay,” she continued, “Some one calls for me, I must leave you,” and she disappeared in the direction of Angel’s home.

And after a time Sorrow said: “My daughter, you are wanted.”

Life and Happiness looked sad, but they kissed Angel and left her. Sorrow disappeared too, and when Angel looked around, she found the dell covered with beautiful flowers, wherever any of the four had stood. She stooped down and picked four flowers, then turned down the narrow track to the homestead.

When she reached the edge of the bush it was just sunset, and the gold sunlight, filtering through the canopy of fresh green leaves, made a fit setting for her beautiful serious little face, with its frame of golden curls.

She hurried on, not lingering as usual to take a last look at the forest she had left, for she was afraid her flowers would die.

Her mother was still sleeping, and Angel put an exquisite flower into her hand, a large purple flower, with a heart like the sunset, and though she did not know it, its name was “Death.”

Just then she heard the tread of a horse’s hoofs, and, the flowers still in her hand, she ran out to greet her father.

“Where is mother, Angel?” he asked.

“Oh, she has gone to sleep in the dining-room,” Angel answered.

He ran lightly up the steps, whistling as he went.

“Well, dearest,” he began cheerfully, “I have good news of our little Marguerite,” then something in her face caught his eye, and he stopped short. His face was an ashen hue as he turned to where the child was standing.

“Your mother will never wake again, Angel,” he said.