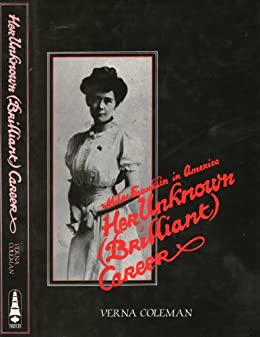 It is of course well-known that Franklin’s first novel, My Brilliant Career, was written when she was still a teenager down on the farm in rural NSW, and was finally published due to the efforts of Henry Lawson, by Lawson’s publisher Blackwoods of Edinburgh in 1901.

Things went well initially for Miles, but only briefly. Her book was wildly popular and Miles was taken up by Sydney society, where she was under the wing of suffragist leader and socialite Rose Scott. She met a great number of people and had an interesting flirtation with Banjo Paterson, meeting him alone on a number of occasions in his flat.

Her first problem was that royalties on ‘colonial’ sales were next to nothing, so she had very little income. The next was that My Brilliant Career was widely read as documentary and a great many people, including members of her own family took umbrage at what they saw as their portrayal – not least the cousins for whom Franklin was for a while governess, as you might imagine! 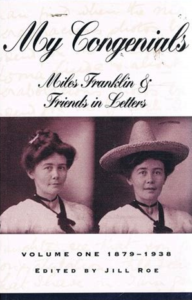 Over the next couple of years Franklin wrote two works. both fictional biographies of a young woman who had written a fictional biography – very post-modern – but she was unable to get them published. She trained as a nurse for a while, then worked as a maid in hotels, in Sydney and in Melbourne, where she became friends with Vida Goldstein’s family.

Her parents sold up their dairy farm and moved to Penrith, in those days a country town outside Sydney, which was the setting for her next, rather dull, novel, Some Everyday Folk and Dawn – about the first NSW state election, in 1904, after (white) women gained the vote. This was eventually published in 1909.

It is not clear what inspired Miles to go to America. It had been on her mind for a couple of years and Vida Goldstein offered her introductions to US feminists. There was also the problem of her cousin Edwin Bridle, who believed that they were engaged.

It is clear that she wrote to him in November 1905 to tell him what she could not say in person. He writes: “It is only a few short days since I was with you and you certainly have not forgotten the promises you made to me then (although you made them possibly against your real feelings …).” And in May, 1906, “My Darling Stella. As I have plenty of spare time now at night, I will send you a few more lines just to assure you again that I am just as much in love with you now …” But, as he knew, Miles had already sailed – from Sydney on the RMS Ventura, bound for San Francisco.

Where she arrived on May 1, 2 weeks after the great earthquake. She had an introduction to US suffragist Carrie Catt, and through her, to two sisters, the Whelans, who put Miles up in their Oakland home for the next six weeks while she volunteered with a Seventh Day Adventist relief organization. By the time Miles was ready to go east, Catt had gone overseas, so the Whelans put her in touch with Jane Addams, of Hull House, Chicago.

Pursued by letters from the long-suffering Edwin, Miles went first to Salt Lake City, where she waitressed for a while at the Kenyon Hotel; on to Colorado where “her riding and shooting exploits won an invitation to join a circus and a proposal from its strong man”; before finally arriving in Chicago in October.

Chicago, with its stock yards, abattoirs, sweatshops and factories, was a hot-bed of corrupt capitalism and radical workers – with anarchist riots, and strikes led by communist Eugene Debs – the subject of Upton Sinclair’s searing The Jungle (1906), which had been serialised the year before in the Socialist newspaper, Appeal to Reason.

Jane Addams had “visited Tolstoy, and had welcomed as guests [anarchist] Peter Kropotkin and socialist economist, Henry George … Hull House had gained a reputation for radicalism by reason of its vigorous discussions on socialism, economics and anarchism. In addition, Hull House was suspected by many worthy burghers of being a hot-bed of rampant feminism. Active suffrage groups and the National Women’s Trade Union League centred there.”

There Miles was befriended by fellow Australian, Alice Henry, 49, formerly of Melbourne, a journalist and social reformer influenced by Catherine Helen Spence. Henry had only been in Chicago a few weeks herself but was already (Chicago) secretary of the new NWTUL. Miles was not so lucky but she was able to support a frugal lifestyle working in a department store, selling shoes probably. She took typing classes at night, and was soon able to get casual typing.

In August 1907 her much loved sister Linda died, having never recovered fully from childbirth. Miles collapsed and the Hull House women found her a home where she could recuperate. In November, Margaret Dreier Robins, national president of the NWTUL, offered her “easy” employment as her personal secretary. “Dear lady, you do not know what a help you would be, if you felt you would and could undertake this work.” 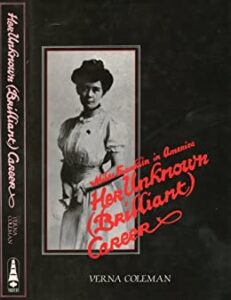 So, writes Coleman, “Stella Franklin”  took her place at the beginning of 1908 in “a group largely composed of women, and mainly young; a collection of idealistic enthusiasts ready to do battle for their cause, with a phalanx of maidens determined to slay the dragons themselves, without relying on St George. Most of these dedicated women did not marry, for the job was not only hard and demanding but involved sudden travel, odd hours and unconventional work.”

Franklin was of course a member of her own union, the Stenographers, and also as a thwarted opera singer, of the League’s ‘Eight Hour Day Choir’. She took better rooms – in the Harvard Hotel at 5714 Washington – “with bay windows overlooking willow trees”. And she began to travel with Margaret Robins. She had a small circle of friends but kept to herself that she was a writer, was still writing – a play, some short stories. In early 1909 Some Everyday Folk and Dawn was polished up and sent to Blackwoods. In the summer she studied French and Tennyson at the University of Wisconsin.

Although 1910 started out with Franklin cold, tired, and depressed, it picked up, with her pay being doubled to $25/week in Feb. and her eventual appointment to the League’s new Life & Labor journal with Alice Henry editor and herself assistant editor. She also  began knocking around with the ‘playboy’ Lloyd brothers. whose parents had taken her in when she collapsed in 1907.

The end of 1910 saw Franklin’s first involvement in a major industrial action, a strike of 41,000 garment workers, including 10,000 women, which dragged on into the new year. She was in the ‘cabinet’ of the League’s strike committee, supporting the women and their children, in charge of public relations, but frequently also at the front of picket lines facing violent police.

Franklin, was not well, and in any case was obsessive about her health. To her chagrin she was prescribed glasses but a little while later fell down the steps at the opera because she wasn’t wearing them. In June 1911 she was elected the League’s National Secretary. Later the same year she visited London, catching up with Vida Goldstein, and briefly visiting Paris which she didn’t like.

She writes (much later) in the semi-biographical Cockatoos, “She had fallen among reformers, and that for an artist is more fatal than for a merchant to fall among bandits.”But she was still ‘working on’ The End of My Career which she had first offered for publication in 1902, and had begun The Net of Circumstance which was eventually published under a silly pseudonym in 1915 by Mills & Boon. Also, she had a year or so earlier written “a pot-boiler for the happy ending market” known variously as The Love Machine and When Cupid Tarried which as far as I know was never published

After a bout of measles, in 1912 she seems more active socially, meeting with the Lloyds, and with the Burley Griffins, and taking up with a new admirer, Guido Mariotti (who lasted six months). Coleman points out that Franklin’s depression was largely private and that in public she was a lively and sought after companion; and was often at the opera and dinner parties.

Life & Labor’s offices were in Dearborn St, and in 1913 she begins a new novel, which she calls to herself Sybyl, after the main character, Sybyl Penelo – a reference of course to her first heroine, Sybylla Penelope Melvyn – but which is eventually published as On Dearborn Street, in which Sybyl is the junior partner in a typing agency. Sybyl is clearly Miles, though the relationship between the two partners does not portray that Miles and Alice Henry both thought they each did all the work on the newspaper; Sybyl’s two love interests represent William and Demarest Lloyd; and there’s even a Margaret Robins figure, Aunt Pattie. Its cutesy style makes it a terrible book to read, but what is interesting is Miles’ eventual argument that for a woman to contemplate marriage, not only should she be ‘pure’, ie, a virgin, but so should the guy.

Miles was never going to give in to William Lloyd, who was married, though she went out with him almost daily around this time. With Demarest you can sense that he thought she was on the verge – though he was probably thinking of an affair and she of marriage. There was another guy on the sidelines, the steady type, just waiting, though she ends her diary entries of two or three of their meetings with “XXXXX”, presumably kisses.

In the end War breaks out, Franklin is determinedly pacifist; Margaret Robins tends to favour the Germans; they argue about the cost of running Life & Labor; and in Oct, 1915, Miles, demoted from her position as NWTUL Secretary-Treasurer, quits and sails for England.

For the best part of a decade Franklin had been at the heart of American first wave feminism; and had mixed with the ‘arty set’ of the US’s second city – the Lloyds, Dreier Robins and Jane Addams were all wealthy and well connected. But she had made almost no progress as a writer, other than her journalism, and it was time for a new start.

Coleman and Roe have each clearly read quite a bit of Franklin’s unpublished work from this time, plays, short stories and journalism, but that privilege is not available to the rest of us. Roy Duncan in his Introduction to On Dearborn Street (1981) writes that the shock of World War I led to “Five full-length manuscripts. One of the earliest, Red Cross Nurse (1914), is an impassioned piece … the script appears to contain a significant measure of autobiography.” I hope one day I can read and review it for you.