April Hersey, Back to the battling (nonfiction extract) 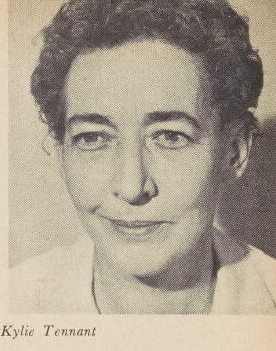 On Wednesday, Bill discussed Kylie Tennant’s Ma Jones and the little white cannibals. The following extract is from of an article by April Hersey which was published in The bulletin in 1967. The piece gives an insight into Tennant’s commitment to “truth” in writing.

Kylie Tennant has always wanted to get to the heart of the matter. Her early research into backgrounds for books like “The Battlers,” “Foveaux,” and “Tell Morning This” made her name legendary for a certain mad courage that took her into brothels, bars, and jails to get material for her novels.

“It was a sort of social research I suppose,” she said. “I have always been fascinated by ecology, and I want to tell people about society. We have no society as such in Australia, no clear-cut class structure – but there are so many sets of values that you can literally fall off one set and into another in the distance between two streets in a suburb. By going there, working there, seeing the world through other people’s eyes you can see what is important to them and what is not. This fascinates me.”

In her adventurous years travelling the roads with itinerant workers and honey gipsies and chatting with criminals she came to no harm. “No one will hurt you,” she says with supreme confidence. “I guarantee I can walk down any street, no matter how notorious, and come out unscathed. I’m the type that finds the fire has been put out. Criminals have always been particularly nice, called me ‘love’ and have generally been rather patronising.”

Experience in her editing work for Macmillans has shown her that the present crop of writers is not so concerned with getting down to basic facts. “Like a friendly old dog with a bone I keep suggesting that someone should research the waterfront of Sydney,” she said. “I lay my bone at their feet, tell them to work there, take notes. No one ever picks up my offering. But truth has a different ring – if they only knew.”

April Hersey, daughter of writer Zora Cross, was a long-time resident of the Blue Mountains, west of Sydney, and a journalist and author in her own right. More about Hersey’s life can be found in her obituary in The Blue Mountains gazette here.