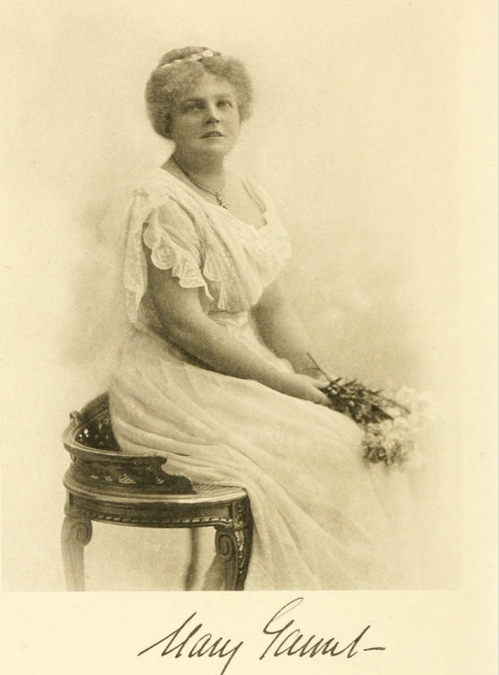 by Mary Gaunt
On Wednesday, Bronwyn continued her discussion of Mary Gaunt and her work, focusing on her travel writings of the 1910s. The following extract is from Gaunt’s memoir, Alone in West Africa. The context: Gaunt has sent a load of luggage ahead of the troupe which is to carry her overnight to Akuse, a town (or perhaps then, village) in the Lower Manya Krobo district of the Eastern region of Ghana. Foolishly, she goes against the wishes of her bearers.

Finally we figured it out that I should start at nine o’clock, which would bring me to Akuse at a little after six in the morning. This did not seem so bad, and I agreed and cordially thanked the kindness which made him plan a nice little dinner in the moonlight on the verandah. It comes back to me as one of he most unique dinners I ever had; we had no other light but that of the moon, the gorgeous moonlight of the Tropics. It shone silver on the fronds of the palms, the mountains loomed dimly mysterious like mountains in a dream, and the road that ran past the house lay clear and still and warm in the white light.

My host asked leave to dine in a cap; he said the moon gave him a headache, and strongly advised me to do likewise, but though I have heard other people say the moon affects them in that manner, it never troubles me and I declined. And he translated his German grace into English for my benefit, and I could not even smile so kindly was the intention; and we ate fruit on the verandah, and none o’clock came and I had the top taken off my hammock and started.

“Yi, yi, yi, ho, ho, ho,” cried the hammock-boys, clapping their hands as they went at a fast trot, far faster than the ordinary man could walk without any burden on his head, and we were off to Akuse and the Volta. The night was as light as day, and it never occurred to me that there was any danger in the path. We went through the town, and here and there a gleam of fire showed, and here and there was a yellow light in one of the window places, and the people were in groups in the streets, dancing, singing, or merely looking on Generally they sang, and no one knows how truly barbaric a hymn can sound sung by a line of lightly clad people keeping time with hands and feet to the music. It might have been a war son, it might have been a wail for those about to die; it was, I realised with a start, “Jesu, lover of my soul,” in the vernacular. I suppose the missionaries know best, but it always seems to me that the latest music-hall favourite would do better for negro [sic] purposes than these hymns that have been endeared to most of us by old association. These new men were splendid hammock-men; they stopped for no man, and the groups melted before them.

A happy peasant people were these, apparently with just that touch of mysterious sadness about them that is with all peasant peoples. Their own sorrows they must have, of course, but they are not forced upon the passer-by as are the sordid sorrows of the great cities of the civilised world. At the outside ring of these dancers hung no mean and hungry wretches having neither part nor parcel with the singers.

Through the town and out into the open country we went, and the trees made shadows clear-cut on the road like splashes of ink, or, where the foliage was less dense, the leaves barely moving in the still night air made a tracery as of lace work on the road beneath, and there was the soft, sleepy murmur of the birds, and the ceaseless skirt of the insects. Occasionally came another sound, penetrating, weird, rather awe-inspiring, the cry of the leopard, but the hammock-boys took no heed – it was moonlight and there were eight of them.

“Yi, yi, yi, ho, ho, ho.” They clapped their hands and sang choruses, and by the time we arrived at the big village of Angomeda, a couple of hours out, I was fairly purring with satisfaction. I have noticed that when things were going well with me I was always somewhat inclined to give all the credit to my perfect management; when they went wrong I laid the blame on Providence, my headman, or any other responsible person within reach. Now my self-satisfaction received a nasty shock.

The village of Angomeda was lying asleep in the moonlight. The brown thatch glistened with moisture, the gates of the compounds and the doors of the houses were fast shut; only from under the dark shadow of a great shade-tree in the centre of the village came something white which resolved itself into Grant apologetic and aggrieved.

“Carriers go sleep here, Ma. They say they no fit go by night.”

My fine new carriers “no fit.” How are the mighty fallen! And I have imagined them pretty nearly at Akuse by now! Clearly, they could not be allowed to stay here. I have done a good many unpleasant things, but I really did not feel I could arrive at Akuse at sic o’clock in the morning without a change of clothing.

But I restrained myself for the moment.

I debated a moment. I realised the situation. I was a woman miles from any white man, and I could not speak one word of the language. Still, I had sent those carriers to Akuse and I could not afford to be defied, therefore I alighted.

“Where are those carriers?”

Nine pointing fingers indicated the house. Evidently the hammock-boys had been here before, and one of them pushed open a door in the wall. Black shadows and silver-white light was that compound. Heaped in the middle, not to be mistaken, were my loads, and from under the deeper shadows beneath the surrounding sheds came tumbling black figures which might or might not have been my erring carriers. I did not know them from the people about them, neither did I know one word of their language, and only one of my hammock-boys spoke any pigeon English. But that consideration did not stay me. I singled out my headman, and him I addressed at length and gave him to understand that I was pained and surprised at such conduct. Never in the course of a long career had I come across carriers who slept when they should have been on the road, and before I was half-way through the harangue those sleepy and reluctant men and women were picking up the loads. I confess I had been doubtful. Why should these carriers pay any attention to me? Now that I know what they risked by their obedience I have no words to express my astonishment.I did not know the carriers, but I did know the loads, and before I got into my hammock I stood at the gate and counted them all out. I need not have worried. The African carrier is the most honest man I have ever met. Never have I lost the smallest trifle entrusted to him. When my goods were well on the road I got into my hammock and stated again.

Oh, such a night! On such a night as this Romeo wooed Juliet, on such a night came the Queen of the Fairies to see charm even in the frolicsome Bottom. All the glories of the ages, all the delights of the world were in that night. The song of the carriers took on a softness and a richness born of the open spaces of the earth and the glorious night, and for accompaniment was the pad-pad of their feet in the dust of the roadway, and in one long, musical monotonous cadence the cheep of the insects, and again a sharper note, the cry of a bat or night bird.

It was orchard-bush country that lay outspread in the white light, with here and there a cocoa plantation. Here a tree cast a dark shadow across the road, and there was a watercourse through which the feet of the men splashed – only in German West Africa may you always count on a bridge – and, again, the trees would grow close and tunnel-like over the road with only an occasional gleam of moonlight breaking through. But always the hammock-boys kept steadily on, and the carriers kept up as never before in two hundred miles of travel had carriers kept up. We went through sleeping villages with whitewashed mud walls and thatched roofs gleaming wetly, and even the dogs and the goats were asleep.

It was midnight. It was long after midnight; the moon was still high and bright, like a great globe of silver, but there had come over the night that subtle change that comes when night and morning meet. It was night no longer; nothing tangible had changed, but it was morning. The twitter of the birds, the cry of the insects, had something of activity in it; the night had passed, another day had come, though the dawning was hours away. And still the men went steadily on.

A great square hill rose up on the horizon, and we came to a clump of trees where the moonlight was shut out altogether; we passed through water, and it was pitch-dark, with just a gleam of moonlight here and there to show how dense was that darkness. It was Akway Pool, and a leopard was crying in the thick bush close beside it. It was uncanny, it was weird; all the terror that I had missed till now in Africa came creeping over me, and the men were singing no longer. Very carefully they stepped, and the pool was so deep that lying strung up in the hammock I could still have touched the water with my hand. Could it be only a leopard that was crying so Might it not be something even worse, something born of the deep, dark pool, and the night Slowly we went up out of the water, and we stood a moment under the shade of the trees, but with the white light within reach, and Krobo Hill loomed up ahead against the dark horizon. The only hammock-boy who could make himself understood came up.

It was a reasonable request, but the leopard was crying still, and the gloom and fear of the pool was upon me.

“No, go on.” They might have defied me, but they went on, and to my surprise, my very great surprise, the carriers were still with us. Presently we were out in the moonlight again; I had got the better of my fears and repented me. “Wait small now.”

“No, Mammy,” came the answer, “this be bad place,” and they went on swiftly, singing and shouting as if to keep their courage up, or, as I gathered afterwards, to give the impression of a great company. Only afterwards did I know what I had done that night. Krobo Hill grew larger and larger at every step, and on Krobo Hill was one of the worst, if not the worst blood fetish in West Africa. Every Krobo youth before he could become a man and choose a wife had to kill a man, and he did it generally on Krobo Hill.

[continue reading the full account of her journey here]