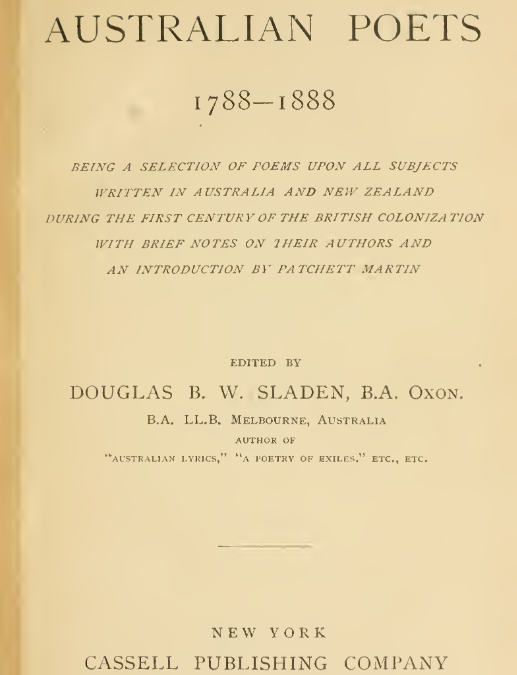 This poem appeared in a centenary anthology, Australian Poets: 1788-1888.

Ours was the land, all ours, mine and my people’s: the tribes,
To roam at will, to dwell, to hunt and to fish in,
We were the lords of the soil, the inheritance ancient
Owned by our fathers, and theirs, who handed it down to their children,
ours, plenteous game: the life of the free in the forest;
Happy were we in the wild, and our wurleys builded at pleasure.
Joy, we could call it at will, guest of the careless and simple;
Joy of feasts at our fires when the tribes in corroborees mingled,
Joy of the rest in the woods, when the wild birds screeched through our dreaming;
Simple our pleasures, but sweet, and care had no word in our language.
The white man, he makes many things; too many; has care, and is weary.
Then the sun rose, and he set, and we journeyed to eastward, to westward,
Clothed in the furs of our spoils, and taking no thought of the future;
Want, we have known it since then; toil, we have hated to learn it.
Why should man labour and sweat, and groan out his life to no profit?
Why make innum’rable things, when his wants are so few and so simple?
Ours was to live and enjoy; the immeas’rable raptures of nature?
Happy were we, more than he who builds, makes great things, and burdens.
I, then, the first of the tribes: I with oppossum fur round me,
I, before any, beheld; looked on a day far out seaward;
Looked, and in wonder was lost; for there I saw on the big water
What I then thought a white bird, bigger than all things but hills are;
Bigger than wurleys, than trees; bigger than all things but mountains.
I was afraid very much, for I thought the bad spirit was coming:
I was the first who beheld, stood on the hill of the whir-whir:
Nearer and nearer it loomed, sweeping along through the water.
Hardly my courage I kept to “Cooey” aloud to my comrades:
There we were gathered in fear, and knew some dread evil awaited;
Little we thought they were men, who drove the great white canoe shoreward.
Nearer and near it came: I covered my face, and in terror
Cowered to earth, and around me cowered my terror-struck people.
Would he had sunk in the sea, and the waters gone foaming above him,
Before he had stepped on the land from my race he wrested!
Houses and farms and the fields of his tillage our hunting-grounds fill;
The game has slipped from the way, is scant and diminished;
We have no country to roam, to dwell therein in abundance;
Stricken are we as the game that the hunter has trapped in its hiding.
We dare not to kindle our fires, to camp on the bounds of his pastures,
See, we are fading away! we wither and pass into shadow!
Fading away from the earth, hardly a remnant remaining.
Many our strong men for fight when the plund’rers swooped down upon us,
Even the scrublands uncleared we scarcely are suffered to rest in,
We, the possessors from first of this country, made all of us black men.
He is the eagle whose eye ranges afar, and through Heaven
Wings his strong flight; the prey sees, and is swift to devour it;
He is the dingo that prowls and lurks all night through the forest,
Howls to the moon in his career, for he scents and he ravins for carcasses.
They talk of their God and His law; we, we know naught of things Christian,
Yet we know this was all ours, and would be so still but for white men.
If we had owned that great force sufficient to conquer them fighting,
Then we, too, might understand this prate of the justice of Heaven.
White man makes sermons and books; his words are subtle and scheming.
The thing that delights him to do, the only right thing seems it ever.
His sons are as sands of the sea, numberless, countless; his gun smoke
Blinds my dust warriors; their spears cannot defend from his trespass.
He tells us account shall be made to the Great Spirit of the hereafter:
Says that one Father alike watches o’er black and white children.
What shall he answer when called to account? Shall his cunning defend him
When, like his Cain, he is bade to give an account of his brother?
We, the despoiled, we decay: we die from the ruin of all things;
Dusky our skins, but we feel; our bosoms are sentient, can suffer.
What shall he answer when asked of the wrong he has wrought on the helpless?
No sense of justice restrains, no balance made equal arrests him;
That which his eye hath desired, lo! he makes waste to possess it;
Thus he erases us out for his pleasure, his gain, his convenience;
And preaching in many big words, he says that his God bade him do it,
Is this the justice of Heaven, the law and the right with the strongest?
His eyes – they look two ways; his hands are grasping at spoil and are greedy.
Let him devour as the dog; eat up the lamb with the eagle;
Profit, and wrest, and enjoy; but prate not of God and religion!