“A book that makes you think… what else is writing about?” Spinifex Press turns 21

Over the past few years, I’ve corresponded intermittently with feminist publisher and author, Susan Hawthorne, of Spinifex Press, a publishing house which next week celebrates 21 years of operation. Ahead of its time, Spinifex was the first Australian publisher (to my knowledge) that produced ebooks.

To celebrate Spinifex’s success and International Women’s Day, Hawthorne agreed to write a summary of books published – in some cases, republished – recently by Spinifex. (Stay tuned for a book give-away.

As a publisher and a writer I always find these challenges
difficult. Not because I don’t have ideas about what’s good or what’s a waste
of time. As a publisher I read the books we at Spinifex publish well ahead of
everyone else. It’s a solitary kind of thrill, but no one to talk to about the
latest most exciting book, so exciting you are prepared to fork out money and
time to ensure it gets onto the shelves.

Here are the Australian novels that we have published at
Spinifex Press between September 2010 and March 2012. I’ll work backwards with a book
that is just published.

Fish-Hair Woman by Merlinda Bobis is a book that I have wanted to see
published for more than ten years. Based on a short story first published in
Merlinda’s award-winning collection, The White Turtle, if you read one book in 2012,
make it this one. Fish-Hair Woman is set in the Philippines in 1987 during the Marcos
regime and the novel gives great insight into the political violence and
kidnappings that have occurred in recent years. It is a complex novel in which
the author asks awkward questions about violence, war, death but also about
love, commitment and beauty. The title refers to the woman whose hair grows
each time a body is found in the river. It grows and grows, and as the bodies
wash downstream she walks into the river and gathers the latest body up in her
hair.

Other books
by Merlinda Bobis:

Bite Your Tongue by
Francesca Rendle-Short is a book I first saw in a different form some years
earlier. What I enjoy about the published version is the crossover of genres –
from fiction to memoir back to fiction. I like the way that Francesca both
separates and melds. For many writers, fiction becomes a way to explore
experiences and ideas from the real world blurring their origins. Francesca
explores her relationship with her mother – and mother daughter relationships
are complex – as well as with the meta-mother, the mother who might have been.
Through her fictional self, Glory, Francesca gets to speak the words she wished
she’d said. This is an enticing read, one that pulls the read back and forth.
But it is also a book that makes you think, and what else is writing about?
Other books
by Francesca Rendle-Short

Remember the Tarantella by
Finola Moorhead was first published in 1987 to great acclaim. Finola then went
on to win the 1991 Vance Palmer Prize for Fiction in the Victoria Premier’s
Awards for Still Murder and wrote the epic novel, Darkness More
Visible. Remember
the Tarantella has
26 characters – all women. She wrote the novel in response to a challenge from
Christina Stead, and through the use of letters of the alphabet, astrology,
tarot, colours and maps, as well as an extraordinary process of feedback from
other writers (documented in the Afterword) Finola keeps her characters in
hand. And they are a rebellious lot: they travel around the world, they shift
allegiances and relationships, they talk endlessly and they dance. The dance is
a key theme in this novel, whether it be the tarantella or the ancient dance of
women. Once you’ve read this novel, you will want to go out and read other
works by Finola Moorhead.

Other novels
by Finola Moorhead

My Sister Chaos by Lara
Fergus is an outstanding book and in 25 years in publishing, I think it is the
best first novel I have encountered and been able to publish. It tells the
story of two sisters from an unnamed country who have escaped from a war, one
is a cartographer, the other an artist. The cartographer and the artist in
their own ways are trying to keep chaos at bay as they try to come to terms
with what has happened to them and others close to them during the war. It is a
book about what refugees go through, how people are silenced and the impact of
brutality. The book is structurally satisfying as well as compelling in its
narrative. As a reader you just have to finish it – and many do – in a single
sitting. The book was one of three finalists in the Dobbie Literary Awards
2010.
Publishing
fiction is a joy. What I enjoy most is working with a writer through discussion
about the shape of the novel, talking about structure, theme, metaphor, whether
the characters are sufficiently delineated and whether the novel hangs
together. I’ve lost count of how many works of fiction we have published,
probably around 50 and we published authors from Australia, New Zealand,
Botswana, South Africa, Nigeria, India and the UK. The media is not always
interested in fiction in spite of the many good reviewers in the country who
are keen to have good books to read, books that make a reader think.

Susan Hawthorne was born in Wagga Wagga and grew up on a farm near Ardlethan. She’s a poet, aerialist, publisher and academic. She is the co-founder with Renate Klein of Australia’s feminist publishing house, Spinifex Press which turns 21 next week. She
has lived for many years in Melbourne and now spends her time between
Victoria and Far North Queensland. Hawthorne has five books of poetry
published, a novel and several books of political theory.

Hawthorne has five books of poetry published, a novel and several books of political theory.
Poetry: 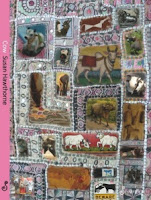 For a review of Hawthorne’s latest collection, Cow, see Robyn Cadwallader‘s “The playful provocation of a complex tapestry” in this week’s Verity La.

Spinifex Press has an outstanding record of publishing books by Australian women. Here is a list of their authors (with links to their biographies on the Spinifex website):

March is “think” month
for the National Year of Reading. Have you read and/or reviewed any of Spinifex’s books? Can you recommend any other books by Australian women that
make you think? What else is writing about?