Caron Eastgate Dann, author of Imagining Siam: a traveller’s literary guide to Thailand, responds to the question: Do men and women write differently?

If you’d asked me the question “Is women’s writing different from men’s” in the 1990s, I would have told you I believed so, but I didn’t have any current information on this topic, because I hardly ever read any fiction by men.

It wasn’t a conscious decision to read novels written by women only, but something that evolved and took over my recreational reading habits almost as if by stealth. I don’t see it as discriminatory: after all, I’d spent a childhood reading through my father’s collection of books, top-heavy with thrillers by the likes of Wilbur Smith and Peter Benchley on the advice of teachers at my school when I did a reading test as a nine-year-old. “Don’t give her children’s books, she should be reading adult books,” they said. I’m not sure if the raunchy, bloodthirsty novel Jaws was quite what they had in mind, but oh well.

This was followed by an undergraduate degree in literature that emphasised the great British canon, mostly by men. Oh yes, there were your Austens, your Brontës, your (George) Elliot, but nothing unexpected. No discoveries, no long-lost or little-known masterpieces by underrated women writers. At the risk of being labeled a philistine by traditionalists, I have to admit that much of this canon I found unspeakably boring: Edmund Spenser’s Faerie Queene that went on and on and on; Sir Walter Scott’s tedious tome Waverley of Scottish highland bleakness and war; and any of the many supercilious rants by Samuel Johnson. For some reason, I still have, from those student days, my copy of selected works by Johnson, and when I picked it up while writing this article, I turned to his The History of Rasselas, Prince of Abissinia. On the third page, I’ve written a word of marginalia: “bored”, it says.

I am not questioning the greatness of any of those writers, and I may feel different about them today. But as an 18-to-20-year-old female student in New Zealand, the British canon seemed to have little of relevance for me, though I did enjoy the Romantic poets. I liked American writers better: Mark Twain, Hemingway. We didn’t study a single Australian writer, by the way.

To break the monotony of that British canon, I also studied New Zealand literature and a wonderful subject about the 20th century novel that focused on writers in exile. While these subjects at least got away from the all-white middle-to-upper-class writers, our reading lists were still sadly lacking in writing by females. In NZ literature, I can remember studying Katherine Mansfield and Patricia Grace, but most of the others were men. In the 20th century novel subject, there were Ralph Ellison, Saul Bellow, Gabriel García Márquez, Kurt Vonnegut. But I can’t remember studying a single female writer. I can excuse studies of writing from previous centuries for being malecentric, because many more male writers were published in those days. But in the late 20th century, there was no excuse for women not making up 50% of any fiction reading list.

Anyhow, in the 1990s, I found myself purposely always selecting novels by women. I wanted to read authentic stories with strong female characters, realistic language and sensitively handled love scenes from a female point-of-view. I didn’t want to read about violence, torture, hunting or soldiers (even though I would go on to write about those things in my own novel). If I read a war story, I wanted it to be about what the women did, not the men. I wanted details of quotidian life in days gone by or in cultures different to my own.  I was a young woman shaping my own writerly identity and I needed role models, I see now.

By 1992, I was acknowledging to myself and others that I avoided novels written by men. This could be difficult. For four years during the 1990s, I lived in Thailand, and naturally, there weren’t as many English language book shops as back in Australia or New Zealand. The wonderful Asia Books shop on Sukhumvit Rd was a sanctuary for me, with thousands of English-language books, packed into four narrow storeys up rickety staircases. In the fiction department, the shop concentrated on blockbusters and novels written by local expatriates, so it could be a challenge to find something that was both literary and had a female author. I ended up reading a lot of mass-market fiction, but I’m not adverse to an easy, fast read, either.

One exception I remember from the 1990s was the Cairo Trilogy, by Naguib Mahfouz, a Nobel Prize for Literature winner in 1988. The first in the series, Palace Walk, is still in my bookcase (most of my other paperbacks from that time being long given away). First published in 1956 in Arabic, it was translated to English in 1990 and, interestingly, the English version was edited by Jacqueline Kennedy Onassis.  I remember marveling at the sensitive way Mahfouz
constructed his female characters. Indeed, Palace Walk begins with an atmospheric scene of a woman who wakes at midnight, as she has done all her long married life, to await her husband’s return “from his evening entertainment”, when she would have to serve him food and drink “until he went to sleep”.

I returned permanently to Australia in 1999, and around 2000, I set up a women’s book club in the small seaside community where I was based, which continued for about six years. I started to keep a book reading diary at this stage, and it’s interesting to look back on my reading habits. It reveals that in 2000 and 2001, only one in every 10 books I read was by a man. My book club members—who were all personal friends, as well—encouraged me to relax my stance and read some male writers as well. By 2002, about half the books I was reading were written by men.

At a meeting in 2004, a friend suggested I read A Special Relationship, by Douglas Kennedy. “It’s about postnatal depression,” she said enthusiastically, “But don’t let that put you off—it’s really good.” Now, not only did I have no children myself, but I had seen my mother go through post-natal depression after my brother was born, and I didn’t think I needed to read about it, too. However, I took the book from my friend and decided to give it a go. I was hooked. I was amazed that a writer could “get” a female character so well. I couldn’t put the book down, and at the end I knew I had been very wrong about male writers not being able to write female protagonists authentically.

The statistics, however, may be a little misleading. One of the reasons my records show that 50% of the books I read are by men, is due to one male writer: Alexander McCall Smith. Basically, I read everything he writes, more for his wonderfully quirky female characters than for the strength of the plots. Precious Ramotswe, the “traditionally built” hero of The No. One Ladies’ Detective Agency series, is one example.

People reacted with surprise when I used to tell them I read only female writers. Even women found my decision strange. Yet really, I was only doing what many men do: being sexist in my choice of reading material.

There is a lot of anecdotal evidence to suggest men read mainly books written by men, while women read books written by men and women. It was the subject of a panel discussion in June, 2011 at the Women’s Word Literary Festival at Lucy Cavendish College, Cambridge University: “Why Don’t Men Read Books By Women?”.And it’s widely reported that J. K. Rowling used initials rather than her first name, Joanne, because her publisher told her boys wouldn’t read books written by women. On its website, Esquire magazine has a list of “The 75 books every man must read”; only two are written by women (To Kill a Mockingbird, by Harper Lee, and A Good Man is Hard to Find, by
Flannery O’Connor).

There is also some research that supports this premise. In 2005, research into gendered reading habits was carried out by two British academics, Lisa Jardine and Annie Watkins, of Queen Mary College in London. They interviewed 100 writers, academics and critics, asking them whether the last novel they read was by a woman or a man. Seventy-five per cent of the men named a male writer, whereas women were as likely to have read a book by a woman as a man. From this, they concluded that “Men who read fiction tend to read fiction by men, while women read fiction by both women and men.” For more on the study, see “Women are still a closed book to men”, by David Smith of The Observer, May 29, 2005.

While I believe my decade focusing on women writers redressed the balance of my earlier years reading a traditional canon, I am happy today to say that I seem to have a gender balance in my personal reading choices. In fact, some of the best books I’ve read lately are by men: The Stolen Child, by Keith Donohue, a retelling of the changeling legend and an examination of the link between mother and child, is a favourite. The biggest surprise for me was probably Jane Bites Back, by Michael Thomas Ford. Looking at the premise, it seems outrageously silly: Jane Austen becomes a vampire so is still alive in the 21st century and running a small bookshop in upstate New York; in swings Lord Byron, who is also a vampire and her former lover, and who is not to be trusted. However, it’s an incredibly witty read that really works. Neither of these fine male writers writes about traditionally ‘male’ subjects
and I’m sure they’d be rarely included on lists of books men should read.

Three of my favourite Australian writers at the moment are all women and, I’ve just realised, all write historical novels and all have first names beginning with “K”: Kate Moreton for her unputdownable and beautifully worded historical sagas; Kate Grenville for her devastatingly tragic stories of colonial Australia; Kerry Greenwood for her sumptuous and rollicking Phryne Fisher series set in 1920s Melbourne. In fact, I’m trying to think of any male Australian writers I’ve read recently. OK, Alex Miller. Brilliant. 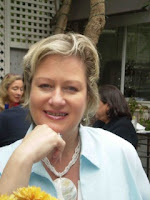 Caron Eastgate Dann is a Melbourne writer, journalist and lecturer. She is the author of a novel, The Occidentals (under the name Caron Eastgate James), and a non-fiction book, Imagining Siam: A Traveller’s Literary Guide to Thailand. She has a PhD in literary studies and currently lectures in Print Cultures at the School of English, Communications and Performance Studies at Monash University. Previously, she was an entertainment industry journalist, working for Woman’s Day, the Sunday Herald Sun and TV Week, among others.

Dr Eastgate Dann’s books don’t appear to be available from AWW supporting bookshops as ebooks (nor, in the ones checked, do they appear in their print catalogues available online). The following links are to Google, which will be launching the #aww2012 challenge to its Google+ circles for International Women’s Day.

Another Aussie Bookshop which has recently joined the challenge is Foster’s Little Bookshop in South Gippsland, Vic.

If you have any thoughts on this post or on the question of whether men and women write differently, please feel free to comment below.