(Imported from Blogger; formatting glitches need to be fixed)
The Barbara Jefferis Award is offered annually for “the best novel written by an Australian author
that depicts women and girls in a positive way or otherwise empowers the
status of women and girls in society”. The award will be announced at the State Library on May 23. Among the books shortlisted were:

Challenge participant and author Mark Webb offered to review one of the shortlisted books, Claire Corbett’s speculative fiction novel When We Have Wings, for AWW.

When We Have Wings is NSW based author Claire Corbett’s debut novel. This intriguing story is set in an interesting world where genetic manipulation has made it possible for people to have wings surgically integrated with their bodies. It is still relatively early days for this technology, and wings are the ultimate status symbol – only the very rich can afford them.

The story is told from the perspective of two protagonists. The first is Peri, a very young woman who has grown up in the country and comes to the city to be a wet nurse for a rich flier couple. She uses the money and contacts that come from her position to pursue her life long dream of buying herself wings. The story opens with the newly winged Peri learning of the death of a fellow nanny and fleeing the city with the baby she is caring for in tow.

The second protagonist is Zeke, an ex-cop and now private detective who is hired by the flier couple to find Peri and their son Hugo. Zeke is middle aged and divorced, with some limited access to his young son Thomas. His ex-wife is pushing hard for Thomas to start undergoing treatments to become a flier, and Zeke’s deliberations about whether to consent form a compelling sub-plot.

The structure of the novel is very interesting, with alternate chapters written from Peri and Zeke’s perspectives. The chapters showing Peri’s point of view are told in third person and read a little like an urban fantasy. The addition of wings, although explained from a scientific basis, give Peri a “power”, and her story has the feel of a person on quest to master that power as well as achieve her stated goals.

Contrastingly, the chapters that tell Zeke’s story are told in first person and read more like a crime novel (with fantastic elements of course). The use of first person, so readily identified with a “gumshoe” story, and highlights this change in tone quite effectively. Both characters are drawn sympathetically and with good depth, which helps draw the reader through a longer than average story.

The first thing that really struck me about the novel was the location. While never explicitly stated, the story felt like it was set in a future version of Australia and the “City” was Sydney rolled forward. I had great fun trying to fit the version of Sydney I walk through each morning on my way to work to that described in the novel. This resulted in a fantastic sense of place with enough detail to feel like a legitimate sketch of a possible future world. The description was cleverly done, in that an Australian reader would take something extra away from the story, but the lack of definitive landmarks makes the story accessible to anyone no matter where they are from.

It was also interesting to read a novel that extrapolates issues like climate change without invoking a dystopia, but rather proposes a more gradual change that humankind has adapted to. Higher water levels, an increasingly tropic climate and the exhaustion of fossil fuels have obviously happened, but not caused the end of the world. This has led to some thought provoking technological evolution as well as some interesting social policy, further extending the city/bush divide that currently exists in Australia.

There were a lot of compelling topics covered in this novel. The dilemmas parents face when deciding whether to intervene to “improve” children were particularly strongly drawn. In the character of Zeke, Ms Corbett did an excellent job of capturing the mindset of many fathers and the concerns of all parents trying to do the best for their children in an increasingly complex world. While we haven’t quite reached the point where we have to worry about whether or not to give children wings, the debate was an effective way of highlighting the increasingly complex choices parents face (e.g. private vs public schooling, extra curricular activities, playing vs learning etc). I felt a lot of empathy for Zeke and the decisions he was trying to work through regarding his son.

But that wasn’t the only issue covered by any stretch of the imagination. The ethics of the wealthy outsourcing more and more of their personal life to the poor, politics making strange bedfellows, the grinding inhumanity that can come from bureaucracy, the horror of human trafficking, divorce and single parent guilt, subtle and patient revenge – this story had it all. In thinking about this review, I started to wonder whether there were too many issues packed in, but when in the middle of reading the book it didn’t seem overly crowded. Ms Corbett did an excellent job layering them all so that they were subordinate to the story, but it certainly did create a lot to think about once my reading was done.

The description of the physical act of flying was very evocative, but lost me a little with the detail. The middle third of the book concentrated a lot on flying and more knowledgeable reviewers have indicated that the detail provided is very well researched. Certainly it all seemed very plausible to me as a lay person. However, with large amount of text dedicated to the description of flight it did feel like the plot slowed down in this part, although someone who has a strong interest in flying would probably not have found this to be the case.

The plot itself was sharp in the beginning and end, and had a mix of sleuthing and just below the surface politics that is very appealing. The mystery at the heart of the story was strong enough to hold everything together. While the novels are very different, the mixture of mystery wrapped in an implied political landscape reminded me a bit of The Courier’s New Bicycle by Kim Westwood, another hugely enjoyable novel that has formed part of my AWWC reading.

Last year Ms Corbett spoke on a panel at the NSW Speculative Fiction Festival, where she mentioned that she had worked for the NSW public service at one stage in her career. I was reminded of this when reading her descriptions of some of the bureaucratic organisations in the novel. Having spent a lot of my career working as a public servant, her depiction of these organisations was very authentic and resonated strongly with my own experiences.

Without giving any of the plot away, I will say that this novel has a beautiful ending. The last couple of pages were particularly moving with lovely imagery and generated some strong emotion. The ending was also good from a plot perspective with enough being wrapped up to bring the book to a close, but enough left messy to feel realistic.

When We Have Wings is an excellent debut novel and I am looking forward to reading more of Ms Corbett’s work. Highly recommended. 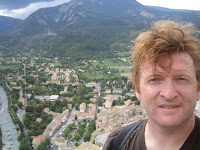 Mark Webb is a part time writer and full time Servant of the Public. His mid-life crisis took the form of writing speculative fiction at a very slow pace. While sceptical of the results, his wife maintains that it was probably a reasonable course of action considering (a) the relatively low cost of the exercise and (b) the clichéd alternatives. He has had stories published at Antipodean SF. Further details of Mark’s struggles against the twin forces of procrastination and a lack of measurable talent can be found at his website, including all his AWWC reviews.

Other AWW reviewers of When We Have Wings:

Have you reviewed this or any of the other books shortlisted for the 2012 Barbara Jefferis Award?