(Imported from Blogger; formatting glitches need to be fixed)
One of the first male book bloggers to sign up for the Australian Women Writers Challenge was Sean Wright, well known as @SeanDBlogonaut on Twitter, and author of the blog Adventures of a Bookonaut. Sean kindly agreed to discuss why he signed up, his experience of gender bias and his journey with the challenge so far.
Sean Wright:
I am really enjoying being involved in the Australian Women’s Writing Challenge this year and appreciate the chance to speak to others interested in the challenge.  I’ll discuss why I chose to join the challenge and what I have observed about women writing in Australian speculative fiction that might be different to men.
Why did I decide to enter?

It was a culmination of things.

Last year I began listening to the wonderful feminist podcast Galactic Suburbia, three women, each with a unique place in the speculative fiction landscape – Alisa Krasnostein, a small press publisher from Western Australia, Tansy Rayner Roberts, an author from  Tasmania and Alexandra Pierce, a reviewer from Victoria.

Their approach to promoting feminism (indirect and conversational) got me thinking about my own reading and resulted in me completing a comprehensive review, a gender  breakdown on the reading and reviewing on my blog.
It was a lesson in implicit gender bias for me.  Prior to the review I believed that I was reasonably well-balanced reader.  I had no issue with reading female writers and was quite pro-feminist.  The results were embarrassing to say the least, the split being somewhere around 18% female to 82% male, novels read.
I made a decision that year to try and balance up my reading and reviewing.  For the general reader I am inclined to say read whatever you like, but for a reviewer like myself I think there’s an obligation to try and be balanced.

My end of year result was a 60/40 split in favour of men.  A distinct improvement but still not the balanced result I was aiming for.  I found that towards the end of the year I simply reviewed what came in the mail box and wasn’t too focussed on making sure that I was a balanced reader.  In that sense I feel that I probably fell into well established and largely unconscious preferences.
This year, with more self awareness, I decided that I really needed to enforce some blatant structural change (I see this as the only way for me personally to get around implicit bias). So I signed up to the Franklin-fantastic
(read 10 and review at least 4 books) level and the dabbler category.  I have already hit that target 10 books and 10 reviews but the intention is to keep going, because frankly the speculative fiction scene in Australia is bubbling over with excellent female writers.
The other reason is that I think it’s probably necessary to swing my reviewing in favour of female writers to make an impact as a consciousness raising exercise.
Having favoured women authors this year I am comforted by the freshness and the quality I have discovered. This depth of quality in the field has me laughing at those who might cry tokenism when it comes to preferencing women over men, who might foretell a fall in quality.  That view assumes that men who get on our best seller lists are there purely by virtue of merit.  My own personal view is that as a culture, we generally preference quality men’s writing over quality women’s writing.

In the speculative fiction field do women write differently to men?

Where I do note differences is around some subject matter.  Some women authors will include plot points or devices that probably would not feature in a male author’s story.  Tansy Rayner Roberts for instance has a character in her Creature Court Series that works as a dressmaker.  This profession forms an integral part of the character and the plot, it’s a continuing feature and focus in what is a violent and sensual fantastical adventure.  I am not sure I have come across a male writer who has used a female profession* in quite the same way.

The consequence of including such devices or plot points is that it makes the work fresh especially for me as a male reader.  It’s offering something different than the standard fantasy tropes.
Kim Westwood, whose work is on my reading list, is another writer who comes to mind in her exploration of gender. I’d be hard pressed to think of a male speculative fiction writer who is exploring similar issues.
Margo Lanagan’s most recent book, Sea Hearts dances around the interaction between men and women, mothers and sons. Claire Corbett manages to fuse both hard science fiction, with mystery, social commentary and issues of parenthood in When we have wings.  In Madigan Mine, horror novelist Kirstyn McDermott cleverly inverts gothic horror tropes by altering the gender.
Conversely I can also think of other female writers who tend to write in a more traditional vein, Deborah Kalin with The Binding Duology and  Rowena Cory Daniells with her King Rolen’s Kin Trilogy (although this does feature a non-stereotypical gay relationship) readily spring to mind.
So that’s a somewhat indecisive answer.  What I am finding though is that female authors of speculative fiction in Australia are in the ascendant, they are producing an abundance of work and it’s pretty much all top shelf.
I‘d like to thank Elizabeth for the opportunity to guest post, I love the challenge and the expansion of my perception with regard to women’s writing in Australia. 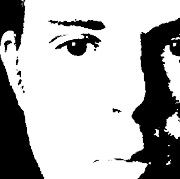 * By female profession I mean that it is one in the book and there is more than passing reference to types of dresses, stiches etc.

Sean Wright is a blogger, reviewer and genre commentator writing at Adventures of a Bookonaut. He currently works as a casual relief teacher for the Department of Education and Child Development in South Australia. He aspires to be a published author but does more aspiring than writing.  He can be found most of the time on twitter under @Seandblogonaut. His blog has recently been nominated in Sydney Writers Best Blogs 2012 competition.