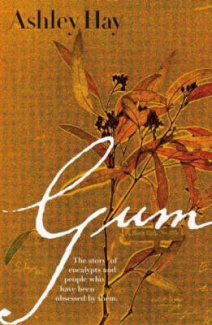 This highly readable book ought to become a classic. While its core theme is the eucalyptus tree in all its diverse forms, more-especially it’s about the people who explored, studied, named, championed, painted and caricatured Eucalyptus and its sister genera, and it even extends to those who propagated and sold the trees in Australia and spread them around the globe. It covers a large spread of Australia’s post-colonial history from an intriguing and novel angle.

For example, one chapter follows the life of Ferdinand Von Mueller (or “Baron Blue Gum” as he was known) the young German pharmacist and amateur botanist who became a champion of the eucalyptus tree. He
established the National Herbarium of Victoria and in 1857 became the first director of Melbourne’s Royal Botanic Gardens. The book also cameos the amazing journeys of Major Thomas Mitchell who accurately surveyed vast tracts of a eucalypt-mantled landscape through which there were almost no roads (and certainly no maps, mobile phones or GPS’s to navigate by!). And in which it was often impossible to see the next-nearest hill or ridge-line through a never-ending frieze of forest trees.

These people, and others of their eras, worked amongst a flora that was largely alien to them, across a landscape that was virtually unknown to westerners, whilst also trying to sustain their family relationships at home during long absences in the bush. So as well as covering the establishment of the systematics of a vast and complex flora, the author highlights the ups and downs of their family lives, their interpersonal relationships, their personality quirks and also their inevitable struggles with the bureaucracies and politicians of their day.

The author also reaches into the artistic realm of the eucalypt, which was the subject of many of the magical paintings of artists like Hans Heysen and also the evocative cartoon drawings of May Gibb. Train driver and passionate eucalypt lover Stan Kelly faithfully recorded more than 600 species as watercolours, which have been published in two volumes; he desperately wanted to paint them all except that the botanists were working faster than he was in describing and defining new species, and he had to admit defeat. And the research on this beautiful and sometimes bizarre tree continues – there are decades, probably centuries of study still to be done but, in the meantime, please read this book!

Dr John Martyn was born in Cornwall and came to Australia in 1970 after mapping in the Rift Valley of Kenya for his PhD in geology. Although he has lived in Sydney since 1979, much of his fieldwork as a minerals exploration geologist over the last 30 years has been in Western Australia. He is the author of a number of nonfiction titles, including Field Guide to the Bushland of the Lane Cove Valley and  Sydney’s Natural World.


Hay is also the author of a number of nonfiction titles, including The Secret: The Strange Marriage of Annabelle Milbanke & Lord Byron (2000), Herbarium (2004), and Museum: The Macleays, Their Collections, and the Search for Order (2007).