Are we letting them down? Indigenous women writers

This year’s NAIDOC theme is “They dared to challenge: Spirit of the Tent Embassy: 40 years on.” The theme “celebrates the champions who lived to renew the spirit of Aboriginal and Torres Strait Islander peoples through the establishment of the Aboriginal Tent Embassy in 1972. Forty years ago, the embassy became a powerful symbol of unity. Its founders instilled pride, advanced equality and educated the country on the rights of Aboriginal and Torres Strait Islander peoples. To move forward, we must acknowledge our forbearers, learn from their experiences and ask ourselves… what have their sacrifices meant for me and my family today?” (From NAIDOC Week website)

The sacrifice and struggles of generations of Indigenous activist have helped to create a growing community of Indigenous writers, including many talented  women. But are these women achieving the recognition they, and their communities, deserve?

This week, I went back over all the reviews that have been posted for the challenge and added a label of the genre to the Mr Linky box entries. I hesitated when I came across a book by an Indigenous author. Should I put “Indig” next to the link? Or would such labelling ghettoise these writers, when the strength of their writing and the interest generated by their chosen subject should be enough to attract attention? (It’s the same question I faced when mounting a challenge dedicated to championing women writers.) Also, what if I missed a particular author who may identify as Indigenous but whose background is not known to me or made obvious in the review?

In the end, I didn’t add the extra label: the 80-character limit for Mr Linky entries decided the issue. Instead, as a contribution to Indigenous Literature Week, I’ve listed below as many links to reviews of books by Indigenous writers that I recognised. (If I’ve missed any, please let me know and I’ll add them.) From this list, we can judge how the challenge has fared so far in addressing the issue of recognising and promoting work by Indigenous women.

To put these results in perspective: so far, of over 900 reviews, only eight ten books by Indigenous/Aboriginal Australian women have been reviewed for the AWW challenge, representing the work of only five seven authors. Among 366 participants signed up for the challenge, only 10 12 reviewers have chosen to review work by Indigenous writers. Of these reviewers, at least two are non-Australian, M D Brady (US) and Ann-Marie (Sweden). Of the 13 15 reviews listed above, six were written by these two non-Australian bloggers.

Why so few reviews of books by Indigenous women?

In her Australia Day post, Dr June Perkins discussed a number of prominent Indigenous Australian women writers (read more here). At the end of Dr Perkins’ essay was a list of Dr Anita Heiss selected “top 10” reads. They were:

Of these, only Miles Franklin award-winner, Alexis Wright, and Dr Heiss
herself have had books reviewed for the challenge.

What about the others?

One possibility for the lack of reviews is the date of release. At a cursory glance, many of the books reviewed for the challenge appear to be new releases, reviewed by established book bloggers. (This, incidentally, begs the question as to whether these books would have been reviewed in any case, with or without the challenge, but that’s for another day.) Perhaps there has been a scarcity of books published by Indigenous women this year? Participants in the challenge might already have reviewed some of the above books in previous years (e.g. Whispering Gums’ March 2011 review of Marie Mukara’s Every Secret Thing and review of Carpentaria). Without further research along these lines, it’s difficult to say.

Another possibility is that the preference for popular or “genre” books exhibited by challenge participants – something the list of “genre” alongside the books reviewed has helped to identify – may be working against Indigenous authors. There could be a perception that Indigenous women writers, apart from Dr Heiss, don’t write “popular”-style books. If so, is this perception justified? At least a couple of books challenge such a view. As an avid reader of crime, I’ve long been looking forward to reading Nicole Watson’s The Boundary, which I’ve heard is a great read. (If the library queue doesn’t shorten soon, I might have to buy myself a copy.) So why has Watson’s book not received the attention of other 2011 releases such as, say, debut author PM Newton’s The Old School (reviewed five times) or Sulari Gentill’s A Few Right Thinking Men (twice) or any number of novels by Kerry Greenwood (eleven reviews)?

Could we be letting our Indigenous women writers down? If so, there’s time to rectify the matter. The challenge has another six months to run.

As a start, if you have read or reviewed any book by an Indigenous Australian woman – even if it wasn’t read for the AWW challenge – perhaps you could leave a comment below? Or if you can recommend any books not listed here, please do. (I’d love to know if any Indigenous authors are writing Fantasy, SciFi or Speculative Fiction.)

Alternatively, please join Lisa Hill and others at ANZ LitLovers blog for Indigenous Literature Week, even if it’s only to read and comment on their reviews.

If you do decide to read an Indigenous author and the above books don’t appeal, check out Anita Heiss’s 100 Black Books Challenge, or Yvonne Perkins’ compilation of Indigenous Australian Histories and Biographies for inspiration.

Let’s add another dimension to the challenge and see whether, by the end of 2012, all the books above have at least one review. 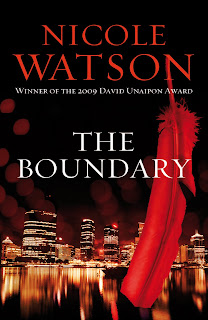 Is that You, Ruthie? – Ruth Hegarty (Memoir)

Am I Black Enough For You? – Anita Heiss (Memoir)

Grace Beside Me – Sue McPherson (reviewed by Emma) Debut YA novel

If you’re a GoodReads user, you can find a list of the above books on a special GoodReads AWW challenge group page (care of Shelleyrae of Book’d Out blog).