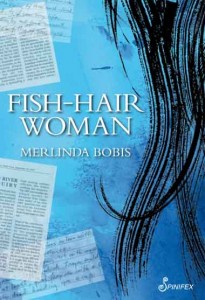 The final guest post in our spotlight on Australian women writers of diverse heritage this month comes from writer, performer and academic, Dr Merlinda Bobis.  Merlinda was born in the Phillipines, where she studied and taught English and Literature, then emigrated to Australia in her early 30s.  She now lives in Wollongong and teaches creative writing at the University of Wollongong.

Merlinda’s writing has been shaped by her attachment to both the Phillipines and Australia, creating, as she writes in her post, a ‘layered, hybrid cultural identity’, which is apparent in her latest work, Fish-Hair Woman.  Here, Estrella, the Fish-Hair Woman, uses her twelve-metre long hair to trawl the river for corpses, victims of the Filipino government’s 1987 war against insurgents.  Blending love and war, Filipino and English, lyricism and horror, the novel is a testament to human nature in all its loveliness and shabbiness. As she wrote this post, Merlinda was on her way to the University of British Columbia in Vancouver to perform ‘River, River’, her one-woman play performance of Fish-Hair Woman.  She has many other strings to her bow, not least an award-winning collection of short stories, White Turtle, and a number of poetry collections, including Summer Was A fast Train Without Terminals.  In her gorgeous piece below, Merlinda writes about the necessity of creating and defining ‘home’ both for herself, as a writer, and for her readers.

Those who who read and review a work by an Australian woman writer of diverse heritage during October will go into a draw to receive either Alice Pung’s Unpolished Gem, or Ruth Park’s Swords and Crowns and Rings (to which Alice wrote the introduction) or a set of Malla Nunn’s Detective Emmanuel Cooper novels, A Beautiful Place To Die, Let the Dead Lie and Silent Valley.  Read away, and review!  I’d love to see what books you find this month.

To write is to come home. It’s 12 midnight in bed in Australia, and I’m in my grandparents’ ancestral house again, in the village of Estancia, Bikol region, Philippines. I enter each room with sensory clarity, smell grandmother’s fish-sauce and lemon grass simmering in coconut milk, see the shadows made by the flickering kerosene lamp, and the fireflies overwhelming the neighbours’ lemon trees, making the night look like Christmas, then it’s day and in the yard, I visit each tree (the hagis, the sambo, the naranghita), smell the ripe guavas, and walk to church among the giant dragonflies of brilliant colours … I come home, I come home. Between sleep and wakefulness, there is the shock of recognition and the uncanny aesthetic of defamiliarisation: the lemon grass becomes tanglad again, its local name and taste, and more.

Body memory is writing-rewriting a moment. It’s the nineties and I’m dreaming “Fish-Hair Woman.” I am a Filipino-Australian writing a novel about my first home.

I migrated to Australia in my early thirties, with sensibility fully shaped, thus the Philippines is the core home of my imaginary. Moreover, my whole family still lives in the Philippines and I visit them regularly. So my first home is indelibly marked on my body and sensibility. So writing is a homecoming. But having lived in Australia for more than twenty years, this new home has added a new layer of markings that have challenged and enriched my sensibility. I write with a layered, hybrid cultural identity. But it’s no ‘happy hybridity.’ There is always the fraught push-and-pull between these two cultures in my negotiation of the aesthetics, politics, and ethics of the writing process. True, my aesthetics is grounded in my original culture — in its history, myths and belief systems — but is continuously shaped and re-shaped by my lived and imagined life that is intercultural. Politics is organic to this aesthetics. What and how I write are determined by what I care and worry about. Whether I’m writing about war, poverty, child prostitution, or the environmental and the geopolitical shifts of our times, I am ultimately storytelling a wish: that we as human beings live dignified, meaningful, and interconnected lives. I write the ‘small, lived story’ struggling within the big politics. And as I grow older, I keep questioning my location, and thus the ethics, of my practice. Writing is an exacting taskmaster. I must love my story and characters into being as passionately and rigorously as I craft each sentence. Then of course, realistically I can no longer be fuelled by passion and discipline alone. I must keep an eye on the industry, if I want my stories to be read.

I publish in Australia, Philippines, and the US, thus for different audiences. They are not only as exacting, with their culturally specific expectations (the aesthetics and politics of the reader cannot be discounted), but also temperamental and even fickle, always on the look out for the new and fresh face in the industry while paradoxically demanding that the story be familiar and aligned with what they already know. With the 24/7 story overload around, most readers no longer have patience for texts that need time and considered savouring. Instant gratification is paramount; easy exchange is the currency. Why should I bother (with stories that are not about me)? Self is the story now, and, for some the only story. The other/s (not of our tribe) are often shadows in the periphery, either not worth the time or, worse, suspect and to be feared. So what of my wish for dignified, meaningful, and interconnected humanity?

As writer, I must take the reader home. Because to read is also to come home. I must not forget this: that even a culturally specific story must be a passage to some common ground beyond cultural identity.

Back to ground. Earth. Body. In my home region of Bikol, we have this saying: “Mabubuhay sa tagilid na daga” — can survive on tilted earth. Bikol is volcanic, in the typhoon and earthquake belt; it is also the fourth poorest region in the Philippines that experienced armed conflict for years. So earth is ‘tilted’ and survival is a struggle. This embodied notion is culturally specific but somehow aligned with our human ‘tilted-ness’ in times of any struggle: from ordinary work stress to something as dramatic as loss of work or a death in the family. How we desperately and awkwardly try to restore balance within the self and who and where we are in our home, this planet! This is beyond culture; it’s the ground where we all come home to. A space that can accommodate even those who are unlike us. For —

“How much can the heart accommodate? … only four chambers but with infinite space like memory, where there is room even for those whom we do not love.” (Fish-Hair Woman, 2012)