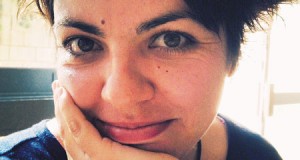 Following on from the success of our focus on Australian Women Writers of Diverse Heritage in October last year, this month the AWW team is holding a focus on Queer Australian Women Writers.  We’ll have guest posts from Michelle Dicinoski, Yvette Walker and Eleanor Jackson, while Bernadette Bean, who does our crime wrap-ups, will also pen a post on queer crime writers.  We also have book giveaways!  Those who post a review on a book by a queer Australian women writer this month will go in the running for a copy of Michelle’s Ghost Wife or Yvette’s Letters to the End of Love.  Both are beautiful books that are rewarding to read.

Some people prefer the term ‘queer’ over terms such as ‘gay’, ‘lesbian’, ‘bisexual’ and ‘transgender’ because it is more inclusive.  It rejects the categorisation of desire, which can be fluid and directed to many different people of different genders at different times.  I’ve put together a list of queer Australian women writers , but if you know of any others, please write them in the comments box and I’ll update the list. Our first guest writer is Michelle Dicinoski, a poet, memoirist and essayist.  In 2011 she published her first book of poetry, Electricity for Beginners (reviewed for AWW in 2012), and in 2013 she published Ghost Wife: A Memoir of Love and Defiance (read my review for AWW 2014 here).  In her post, Michelle uses the image of the shadow as a metaphor for identity, musing that if you ‘are a gay or lesbian or queer or trans writer, or a writer with disability, or a writer of colour, maybe you are always writing in the light, always aware in some way of your own shadow’.  Her meditation can be seen as part of her continuing preoccupation with things seem insubstantial or forgotten, and which are revived or brought back into focus through writing, as illuminated in her recent essay for Meanjin on the abandoned buildings of Detroit. I read books by men. All sorts of men. American men, Polish men, Chilean men, Kiwi men. Men who are hipsters or curmudgeons or kindly dorks. Sweet men and smart men and men who are rumoured to be insufferable gits in person but who can write a sentence that snags or burns or seduces in ways that are almost inexplicable. I also read books by women. Old and young women, long-dead and bristlingly alive, poets and essayists and novelists. Women whose writing is genius and brutal and wounds me in that way Kafka says books should, as something that comes to “affect us like a disaster.”

I am telling you all of this because my friend Jess White asked me to write a blog post. This blog post, for the Australian Women Writers’ Challenge.

She picked me because I’m a queer writer. I wrote a book, Ghost Wife: A Memoir of Love and Defiance, about my journey to Toronto to marry my partner, Heather, and about the secrets and hidden histories that my life has been shaped by.

A blog post. It sounded easy enough. People have written entire books on the topic of writing and identity, but still. I could easily whip something up. The more I thought about the topic, though, the harder it was to pin down. Identity has a way of slipping away from you when you grapple with it. And yet, it’s always there.

A recent viral video shows toddlers seeing their shadow for the very first time. At first unaware, the children soon realise that a mysterious dark shape is attached to them. Attached! By the feet! Some of the toddlers stand stock-still and stare. Some speed up and try to outrun it. Some just scream.

The adults, at a bit of a loss, tell the children over and over, “It’s your shadow. It’s just your shadow.” As if that explains it all. Identities are like shadows. We stumble along for a while not knowing that we have them, until one day, at least for some of us: ka-boom.

“I am myself. I’m a subject,” we realise, though perhaps not in those words. “I have an identity.” The thought that this thing is somehow attached but intangible can be deeply alarming. Like the kid at the end of the video, we long to slap it over the head, to feel what it is, to know it. But it just stares eyelessly back at us.

When you are a gay or lesbian or queer or trans writer, or a writer with disability, or a writer of colour, maybe you are always writing in the light, always aware in some way of your own shadow. Maybe identity is more present for us than it is for other writers—not just our identities as whatever “minorities” we happen to fall into, but identity in the broader sense. Who we think we are, and how we became that. How people see us.

Thinking about all this made me think again about gender. Women are not a minority, but women writers are still under-represented in major publications. That’s why the AWW Challenge and the Stella Prize exist. It’s why we need a place like Hedgebrook, the residency for women writers on Whidbey Island, Washington. It’s why the Bechdel Test is useful for making us think about the kinds of stories we’re telling, reading, watching, absorbing.

So when we talk about identity and writing, or identity and reading, it’s important to think about identity as something that everyone has, not just those who are, for instance, queer or Aboriginal or female or all three at once. If certain identities are so naturalised that they are seen as default positions—and they are—then those identities become invisible. If your identity is invisible to you, you probably aren’t unaware of how it might have privileged or disadvantaged you. And if certain identities are naturalised, then perhaps other identities run the risk of being seen as forever marginal, niche, particular.

It’s important to me that people read Ghost Wife because it speaks to their personal experience. But I also want it to be read by old straight men and homophobic young women and anti-marriage queers and trumpet players and electricians and baristas and people who prefer fantasy novels and people who hardly ever read books at all. People who are, at least in some ways, not like me. The world bubbles with stories about different kinds of lives, but often we don’t hear much about them. I want to write them and I want to read them. I want to forget myself and then remember myself. I want to finish a book and look down and say, “Oh, that’s right, a shadow.” And I hope others do the same.