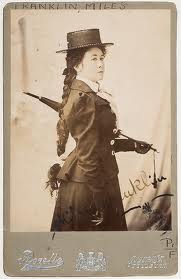 The longlist for this year’s Miles Franklin Literary Award has been announced and includes seven titles by women, four by men. two debut novelists, and two past winners. It’s great to see some crossover with several Stella Prize-listed titles.

Speaking on behalf of the judging panel, State Library of NSW Mitchell Librarian, Richard Neville, said the strength and diversity of this year’s entrants is testament to the depth and breadth of Australian literary talent.

“With 53 submissions received, the 2014 Miles Franklin Literary Award has once again cemented itself as a pre-eminent award within the national arts community. Whittling the entries down to 11 for the longlist was both rewarding and challenging due to the high calibre of submissions.

The longlisted titles are:

The Miles Franklin Award is regarded as Australia’s most prestigious literature prize, having been established through the will of My Brilliant Career author, Stella Maria Sarah Miles Franklin. First awarded in 1957, the Award is presented each year to the novel which is of the highest literary merit and presents Australian life in any of its phases.

The Miles Franklin 2014 shortlist will be announced at a public event at the State Library of New South Wales on Thursday 15 May 2014, with the winner to be announced on Thursday 26 June 2014.

So far, there has been only one (very short) AWW Challenge review of The Life and Times of Lena Gaunt. We’d love to hear more from readers about this novel about music and the life of Lena Gaunt, “theremin player of legend.” I’ve always loved the eerie, twangy sound of the theremin and am intrigued to find out more about Lena’s life in Singapore and Western Australia.

I adored The Railway Man’s Wife and predicted it would or at least should be on awards lists so am thrilled to see it here on the longlist. It has been reviewed many times by AWW Challenge participants including Michelle McLaren who wrote: “An elegiac tale of love, loss and letting go, Ashley Hay’s second novel, The Railwayman’s Wife, shimmers with grace. It’s an unhurried, lyrical novel; sad and sweet at the same time. Hay’s pace is deliberately languid as she drifts smoothly between events in the present and the past, as gradually we learn, in alternating chapters, how Mac and Annika met and fell in love – first with each other, and then with Thirroul. The Railwayman’s Wife is an elegant novel, rendered with consummate skill. It’s charged with emotion – after all, how could a novel about grief be anything else? – but Hay never lets herself stray into melodrama or mawkish sentiment.”

I raided a couple of my local public libraries for this year’s Stella Prize titles and am looking forward to grabbing this one from my TBR pile. Mullumbimby has been reviewed by many Challenge participants including Katie Keys, Sue over at Discombobula, and AWW’s Jessica White. Katie Keys writies: “It is a book of love, grief and discovery, of the small daily fights that make up the one big one, and of a new quality of conversation that Australia is having with itself.” Sue loved the book saying: “As a whitey, reading a novel set in Queensland, a few thousand k’s away from me both geographically and otherwise, I feel a rather keen sense of jealousy, running alongside a feeling of kinship, alongside a conscious need to check my romanticism….This book is about dualities. About the ways language is used as a tool, as a proof of identity.  About barbed wire spaced throughout land once stolen, fences which keep out or keep in.  It is about misconceptions, on both sides of the black and white divide, and about generosity.  It is about a familiar Australia and a foreign one.”

Sonja reviewed The Night Guest saying: “McFarlane has approached this story of love, ageing loneliness, and deceit in impeccable style. The writing is subtle and sensitive, the pace slow and meandering in some parts, chaotic and in others, until the underlying tension accelerates to reach a sinister crescendo.” Lisa Walker writes: “The Night Guest was a standout read for me. Something of a psychological thriller, it also covers a wide emotional territory. Ruth’s memories of her first love Richard and her life with her husband interweave with her increasingly bizarre daily life. The story raises themes about aging, trust and dependence. McFarlane tells this story in simple but evocative prose. Inspired, she says, by both her grandmothers having dementia, it is a finely wrought picture of a mind coming undone. This is a hard book to review without spoilers so I’m going to have to leave it there. Eerie, suspenseful and thought-provoking, I suspect that The Night Guest will be one of my top reads for this year.”

Cory Taylor’s My Beautiful Enemy has not yet been reviewed for the AWW Challenge — looking forward to reading your reviews. The synopsis tells us that “Arthur Wheeler is haunted by his infatuation with a Japanese youth he encountered in the enemy alien camp where he worked as a guard during WW2. Abandoning his wife and baby son, Arthur sets out on a doomed mission to rescue his lover from forced deportation back to Japan, a country in ruins. Thus begins the secret history of a soldier at war with his own sexuality and dangerously at odds with the racism that underpins the crumbling British Empire.”

The Swan Book has been reviewed many times by AWW Challenge paritcipants including Chris White who found it “beautiful, tragic and breathtaking saying of it: Buy this book. It is brilliant. It made me feel almost deliriously happy, thanks to the beautiful combinations of brilliant prose and of the teasing, twisting poetry. It made me feel guilty, as a white Australian, of the Intervention and of our treatment of Aboriginals in general. It is powerful, on the topic of Aboriginal rights and their mistreatment, on the subject of boat-people and refugees and their mistreatment, on the feelings of a little girl, abused and forgotten. The mingling of Aboriginal songlines and the descriptions of birds in particular are poetically gorgeous. It also reminds me (in the best possible way) of Kafka and Borges —I cannot recommend The Swan Book any more than I do.”

I loved All the Birds, Singing and reviewed it for the Newtown Review of Books saying: “This is a novel written from and for the senses. It is full of sounds, strong emotions and smells – bush smells, food smells, the smell of blood and fear. It is also a novel about the rhythm of life on the land, about loss, grief, and friendship, about lonely people trying to reach out and connect with one another. Part thriller, part coming-of-age story, All the Birds, Singing is probably not for those who don’t like to read about the darker side of human experience. As for me, I couldn’t stop reading and the novel came with me into my dreams the night I finished it …” Sue of Whispering Gums wrote of it: “Wyld’s writing is marvellous. The imagery is strong but not heavy-handed because it blends into the story. The rhythm changes to suit the mood. The plot contains parallels that you gradually realise are pointing the way. There’s humour and irony. I love the fact that our Jake, on the run from whatever it is, smokes “Holiday” brand cigarettes. There’s a bleakness to the novel, but it’s not unremitting. Jake, always the outsider, is tough and resourceful. She sleeps with a hammer under her pillow, but she has a soft side that is revealed mostly through her tenderness towards her animals….All the Birds, Singing is about how the past cannot “be left alone”. “We’ve all got pasts”, the shearers’ boss tells Jake early in the novel, but for some people the past must be dealt with before they can move on. The novel is also about redemption. It’s not the first novel about the subject, and neither will it be the last, but it is a finely told version that catches you in its grips and makes you feel you are reading it for the first time.”

Please keep reading and sending in your reviews, all of which can be accessed here.

I’m a freelance book reviewer, journalist, writer and editor. I blog over at Wordsville and can be found on Twitter @PaulaGrunseit