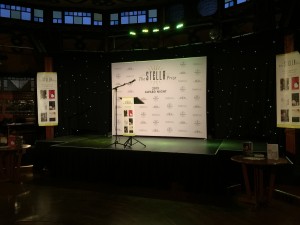 After Paula’s comprehensive announcement of the Stella Award winner for 2015 — it was Emily Bitto for The Strays, if you missed it — I thought I’d do a quick post about the awards ceremony itself.

This year the ceremony was held in the Spiegeltent, presently located in Collingwood. If you’ve never been to the Spiegeltent, it’s mostly wooden with stained-glass windows near the ceiling — not very tent-like. For the Stella awards there were no seats in the central area, leaving us to freely mingle with other guests (and with our drinks and nibbles). The stage just before proceedings began

The ceremony, once it properly began, was fairly to the point. The judges went through the shortlistees, delivering praise and handing out envelopes accompanied by flowers. And then, without much ado, it was time to announce the winner.

Emily Bitto was a gracious winner and her acceptance speech covered many important topics. She spoke about how the Stella Prize in particular was a meaningful award to her for its support of women. I was particularly interested when she spoke about her PhD research and how historically women have not been allowed to be proper artists. Or if they were it was only through the loss of their feminine qualities. Having seen two of the shortlistees on stage with their children, it’s safe to say the Stella Prize is doing its bit to redress the balance.

The Stella Prize ceremony was a magical night. I arrived not knowing anyone, but everyone I spoke to was welcoming and inclusive. If you ever get the chance to go, I highly recommend it. Tsana Dolichva is a Ditmar Award-nominated book blogger who has been reading and enjoying Australian speculative fiction since she first started reading “grown up” books. She blogs her book reviews over at the creatively titled Tsana’s Reads. Along with Holly Kench, she is editing Defying Doomsday, an anthology showing that people with disability and chronic illness also have stories to tell, even when the world is ending. It is currently being crowd-funded.