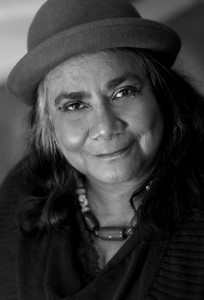 Gayle was Indigenous Issues Editor/Writer for Streetwize Comics from 1995-1998. In 2005 her book of poetry ‘Koori Girl Goes Shoppin’ was shortlisted for the David Unaipon Award. Gayle went on to win the award in 2006 with her book Me, Antman & Fleabag. That book was shortlisted for a Victorian Premier’s Literary Award and Deadly Award and was also commended in the Kate Challis RAKA Award. Her children’s books for the Yarning Strong series were nominated for 2011 Deadly Award for Achievement in Literature. She has had articles and short stories published in a diverse range of publications, including The Australian Women’s Weekly, Australian Author, The Sydney Morning Herald and the Edinburgh Review. Gayle has presented at various writers festivals and NAIDOC events as well as speaking both nationally and internationally on her experience with polio and disability in general. Gayle also worked with the Red Room Company on a poem to celebrate the ‘Carved Trees’ exhibition at the NSW State Library. Gayle speaks at schools and also runs writing workshops. In February 2014, she published six new graphic novels with Oxford University Press.

AWW participants who read and review a book by an Aboriginal or Torres Strait Islander women writer in Juy will be in the running to receive a copy of Gayle’s award winning book Me, Antman & Fleabag. One of my earliest memories (and one verified by mother and various relatives) is of standing on a table surrounded by smiling people as I sang the old country song ‘I Want a Pardon For Daddy.’ The faces are beaming, encouraging. The faces are black. My next memory is of being trapped inside an iron lung, a victim of polio.

I see no other black faces over the three years I am in the rehab hospital. Everyone around me is white. There are no mirrors. I am reflected solely in the faces of those around me. I never take the time to observe the colour of my skin. It is of no consequence in my world. I sleep very little. My overactive imagination turns the shadows into monster. I always end up whimpering and am soon gathered into the arms of a nurse who dries my tears and carries me to the nurse’s stations. I am fed buttered arrowroot biscuits and cold milk and entertain them with childish stories and remembered songs. I feel loved and safe. After countless hours of physiotherapy, hydrotherapy and sheer bullying I gradually learn to walk and was fitted with callipers and sent home with two strangers, my parents who to my initial surprise and shock are black. To this day I wonder why there was no period of adjustment with my parents. To be sent off from the only home I’d known with two strangers was I believe, rather cruel. Although it didn’t take long to learn to love my family, the reality was that I was not home for good. For the next ten years, twice a year I was taken kicking and screaming from my mother’s arms for the 17 hour train journey to Sydney to a place called the Far West Children’s Home for further treatment. Twice yearly I was thrust back into an all white environment where I had to undergo a mind transformation in order to cope with my continually changing world. How different were my two worlds. The Far West Home in those days was a cold and forbidding place. The playground was all green concrete with high fences and only two solitary hurdy gurdies for entertainment. What made it so poignant was that directly across the road was Manly Beach. You could smell the sea, the fairly floss, the toffee apples and watch people laughing and having fun. We learnt that if you pressed your nose against the wire people would sometimes take pity and slip bags of lollies to you. Sometimes there were outings and visiting stars of the day to break up the monotony, but mostly it was the same dreary routine. It was so different from home with family, noise, animals, a river, grass, trees and when it rained the unbelievably beautiful smell of water on dry earth. At home I was black and went barefoot except for school and outings. At the Far West I was unsure of just what colour I was and I wore callipers from six in the morning until 7 at night. My family didn’t have the money to come and see me and in a way I’m grateful for that, because it enabled me to adjust to life there without the distractions. My isolation allowed me to develop even further my wonderful gift of imagination. I learnt how to block out pain with my mind and adjust easily to new circumstances and live in the moment. Where I was, was where I was. I developed a deeply rich inner life. I learnt to treasure solitude because alone I could be anyone I wanted to be. I could be anywhere I wanted to be. My legs may have been encased in callipers in the physical world but in my inner world they were strong and muscular and on my feet I wore delicate, silken, butter soft slippers and danced like the ballerinas I had seen in films and on the stage. Or I was barefoot and ran like the wind across vast expanses of beach and desert. I wasn’t tethered to the earth. Oh no! I flew like a bird and rode on magic carpets and looked with pity at the people below as they scurried across the earth, harried and worried and unable to see me smiling down on them. I leapt on strong stallions and rode bareback beside princes and warriors. I never saw myself as disabled and that remained so until I developed post-polio syndrome in my late 40’s. This slowly but surely robbed me of mobility and got to the point where I found myself in a wheelchair full time. I could no longer deal with a full time job and eventually had to come to grips with finding new ways of making a living and of living in general. I decided to become a writer and started by entering competitions, pitting myself against other would be writers and to my utter amazement I started winning. I submitted articles to various newspapers and journals and they published them. I wrote a book and it won the David Unaipon Award, and was published by UQP. That book took me all over Australia. I have since written eleven children’s books as well as many articles and short stories. I speak at conferences, I give writing workshops, and I teach children. My life is run and organised to suit my needs now and not others. I have a five-second commute from bed to desk. I can wear my nightie to work if I so choose and my natural nocturnal ways now rule. My friends say I keep rock star hours and know to never call before 12 noon.

The life of writer can be difficult not the least being that we are chronically underpaid. But if you are willing to say yes to any challenge that can include anything from writing pamphlets, running workshops to performing your work on stage, you can make a living at doing what you love, and that is an enormous privilege denied to many.

In closing, I’m often asked how does one become a writer and the only answer is, ‘Just write.’