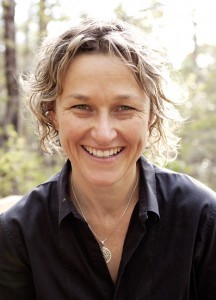 As part of AWW’s commitment to diversity, we’re holding a focus on lesbian/queer women writers over October. Our first guest post comes from Inga Simpson, a Queensland novelist and nature writer. Inga’s first novel, Mr Wigg, was published following her participation in the 2011 QWC/Hachette manuscript development program and it was shortlisted for an Indie Award and longlisted for the Dobbie award. Her second novel, Nest, has been shortlisted for the Courier Mail People’s Choice Award, the ALS Gold Medal, and longlisted for the 2015 Miles Franklin Literary Award and the Stella Prize. She is also the winner of the 2012 Eric Rolls Nature Writing Prize, and was shortlisted for the 2009 Queensland Premier’s Award for best emerging author.

Below, she writes about the importance of finding a way back to her self, and of writing that self into being.

In our own voice

I’ve recently finished what will be known as my third novel, and I’m full of the usual fears and hopes for its journey into the world. This time, however, those feelings have a sharper note.

I had written two books about solitary characters: Mr Wigg, in his eighties and recently widowed, and Nest’s Jen, entering middle age after the end of a long relationship. I’m most interested in our relationship with the natural world, which those characters allowed me to explore in different ways. But it also meant that both books were backstory-heavy, with the characters’ personal lives largely in the past tense. With my next book, I figured it was time I wrote a character in a relationship, and a story in real time. In my initial exploratory stage, I was open minded as to whether she would be gay or straight, but as her character began to emerge, and I structured the story around a museum heist and righting past wrongs, I realised that she had to be gay. In a book about buried histories, and acting counter to the mainstream, it made sense.

If she hadn’t been a good fit for the story, I would have tried to write her straight, but I wasn’t that confident that I could portray a heterosexual relationship with any authenticity or heart. And I figured it was high time that I wrote a book with a lesbian protagonist.

I spoke at an event earlier this year, convened to foster diversity in Queensland writing. I asked the (smallish) crowd to name an Australian novel with a lesbian protagonist, and after a significant silence, a lone voice sang out “Monkey’s Mask” (there are, of course, lots more, many of which have been mentioned on this website). Over drinks afterwards, a fellow was at great pains to tell me that he had a lesbian character in one of his novels, “but she ends up murdered and cut into pieces”. It was fortunate that I had a mouthful of cheese and biscuit at the time, forcing me to pause before pointing out everything that was wrong with that sentence. When lesbians have been visible in mainstream literature and film, too often they have been portrayed as monsters or victims, and the lesbian relationship a temporary aberration only disrupting the true relationship with Mr Right.

I heard Melissa Lucashenko say once that when she writes lesbian characters she feels she needs to make them “heroic.” I think there’s something in that. I’m certainly conscious of the need to portray lesbian characters positively and to write against stereotypes – it still feels like one small step for Lesbiankind. There’s an element of self-consciousness to writing in this way, of course, and inevitably drawing attention to your own sexuality.

I don’t talk much about my first book, Fatal Development (2010) – a lesbian detective novel set in Brisbane. That’s partly because it was published by a small press in the States (I think a total of fifteen people have read it) and it is now out of print. It’s also quite at odds with what I write now, in that its crime, and very urban. It was the first thing I had written, an experiment, a PhD novel – and it all shows. In many ways, I wish I had left it in the drawer. Mr Wigg was marketed as my first novel, and it was simpler to go along with that. At a regional writers festival this year, my interviewer suggested meeting before our evening event for a drink. When I sat down, I was mortified, I have to admit, to see, next to Mr Wigg and Nest, a copy of Fatal Development. “How did you get hold of that!?” I said. I gulped at my gin, but it didn’t stop the fierce blush. I was embarrassed at the thought of a literary studies lecturer having read what now feels like immature work – but perhaps that wasn’t all. My interviewer was fascinated by the shift from Fatal Development to Mr Wigg. “It’s as if you went out one door and came back in another,” he said.

Perhaps I had. By way of an answer, I spoke about my move to a property in the Sunshine Coast hinterland and my discovery of nature writing, and the journey that had taken me on – in life and my writing life. I feel very much that it has been a path back to my true self, my best self. But perhaps it had taken me a little away from myself, too. Reading all those male narratives, set alone in their cabin in the woods had fostered certain hermitic ways – and narrowed my vision. It had been a long time since I read any Sarah Waters, Dorothy Porter, or Jeanette Winterson – it was their books, after all, that got me thinking about writing in the first place.

When I got home, and back to writing Where the Trees Were, my character – Jay – had a little more purpose, a touch of the heroic in her step. She’s comfortable in her natural environment, if not quite comfortable in herself. That discomfort is behind her decision to take action, which much of the novel hinges on. “Sometimes, someone just has to do something,” Jay says at one point, defending her actions. I didn’t think it was a book about sexuality – but perhaps it is.

Story allows us to reimagine our lives, alternate futures, other possibilities – more generous and inclusive societies. And as is the case for all minorities, literature empowers us, gives us visibility. We need more lesbian characters on the page, and we need them written in our own voice.

Where the Trees Were will be published by Hachette on 22 March 2015.