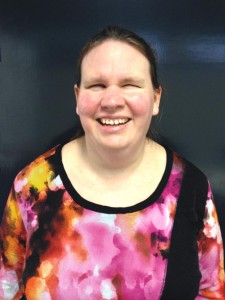 I first met Amanda Tink at a fantastic conference for artists with disability two years ago. A little while later, she contacted me to ask if I knew of any other writers with disability, beyond the ones I had put in my Australian Women Writers with Disability list. Frustratingly, I couldn’t think of many more. Amanda, who is a writer, lives in front of her laptop and braille display with good coffee nearby, and tweets at @amandatink. She is doing new and critical research on Australian disability literature at Western Sydney University, so I was delighted that she could write a post for us. Below, she discusses the necessity for adjustment not so much for people with disability, but for readers who receive their work. As a researcher of Australian writers with disability, and the influence that disability has on their writing, I’m always alert for anything that will spark or shape my thoughts. My latest find is a TED talk on camels (you can also see this video below!).

It’s a marvellous story told by Latif Nasser of how, in 2006, paleobiologist Natalia Rybczynski found the first of a number of fragments that turned out to be bone. That bone turned out to be the leg of a camel. And because it was found less than ten degrees latitude from the North magnetic pole it has changed everything scientists thought they knew about camels. Camels are not, as is commonly believed, exclusively desert dwellers, they are world travellers.

I love this story for many writing and disability-related reasons. They include the same conclusions that Nasser draws: “the story of our world is a dynamic one. It requires our willingness to readjust; to reimagine.” Gaele Sobott has already concretely and comprehensively demonstrated the evolving nature of our world, and therefore our experience and our writing; so I want to focus on the adjustment the dynamic nature of things requires from writers and the literary community.

We have to adjust our stories about who can be a writer. During the last twelve months of immersing myself in literary culture I’ve found that it’s littered with implicit assumptions such as “deaf people can’t write poetry”, and “dyslexic people can’t write at all”. For the longest time most of us have told ourselves and each other that camels have broad feet to steadily trudge through sand, and humps storing fat so they can survive the kind of long hot summers unique to deserts. Three and a half million years ago however, camels were plodding through the arctic snow, enduring long foodless winters. In other words, we tend to assume that the way we think bodies have operated is the only way they can operate, and often our assumptions are wrong. Camels were not designed for the desert, they adapted to it, Similarly, there is a long tradition of both deaf poets (including Australian Judith Wright), and dyslexic authors (including Australian Jackie French).

We have to adjust our stories about who can tell disability stories. Disability has previously been a bit of a literary free-for-all, but the ethics around writing impairment and disability stories need to match those for groups such as indigenous people. As someone with the general knowledge most of us has about camels, until now, if I’d written a camel story, it would’ve been about camels in the desert. And, although I know better since watching the TED talk, it’s hardly made me an expert. The only place the story of camels in the arctic could’ve come from was the shards of camel bone. I’m not saying you necessarily need to be a person with disability to write disability stories, although it unequivocally helps. I am saying that, at the very least you need to have held those bone shards in your hands, and spent long hours painstakingly discovering the shape they make, and noticed they have a smell that’s illuminating.

The evolving ethics around writing about disability are as complex as they are for other minority groups. At the same time, as for other minority groups, they’re not nearly as complicated as the people who would like to disregard them contend. Autism is a useful example. Donna Williams is an Australian living in England who wrote one of the first memoirs of autism in the world back in 1991. There’s much more to be gained by reading Nobody Nowhere, or her two subsequent memoirs, or her poetry, than there is by reading The Curious Incident of the Dog in the Night-Time. While Mark Haddon is distinctly vague about whether the main character of his best-selling book is autistic or not, but also “unsurprised” that he is constantly asked to speak about autism, the vast majority of autistic adults are clear that Christopher was written as Haddon says he was, with little research, or thought for autistic people. Knowledge on its own is not enough though, even when it comes from being related to a person with disability. Ari Ne’eman’s superb article explains why he believes that Steve Silberman, a man with no lived or family experience of autism, has written one of the most informative books on the topic (NeuroTribes), while Caren Zucker and John Donvan, who have family members with autism, have not (In a Different Key). Essentially and unsurprisingly, the difference is that Silberman displays “a deep respect and complex characterisation”, while Zucker and Donvan are “clearly coming from a parent point of view” which is “only a part of understanding autism”.

Finally, we have to adjust our stories about who and what Australian literature is. Through the TED talk I learned that camels originated in America forty-five million years ago. This is information that scientists have known for a long time, it’s just never made it into general knowledge. I have the same experience when I tell people one of my case studies is Henry Lawson, and they ask me what his disability was. When I tell them his impairment was deafness they say they didn’t know. And they truly didn’t, though it’s pretty damn difficult to find even a cursory Lawson biography that doesn’t mention it. It’s been just one of those details that Australian literature hasn’t previously viewed as important. I’ve been fortunate to have in Ivor Indyk a supervisor who was prepared both to say upfront that it’s an area of Australian literature that he had “never thought of as a possibility”, and to share my curiosity to explore what is indeed, in an academic context, a completely new field. This is the kind of open-mindedness that Australian literature and writers with disability need.

I want to discover the history of Australian disability literature, and in a few short months I’ll have findings to share. What’s already clear is that writers with disability have always been part of the Australian literature story. Our role, however, has so far remained unrecognised. If we can adjust our stories about who can be a writer, who can tell disability stories, and who and what Australian literature is, we’ll have a complete and enriching picture of our literature, which can only improve it for all of us.