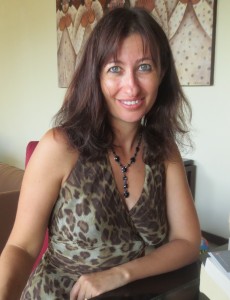 For our focus on Australian women writers of migrant heritage, we were delighted to feature Eileen Chong’s poetic essay about mother tongues and multilingualism. Our next guest poster is the wonderful Lee Kofman. Lee is a Russian-born Israeli-Australian novelist, short story writer, essayist, memoirist and sometimes-poet, and a rebellious daughter of ultra-orthodox Jewish parents. Her latest book is the memoir The Dangerous Bride (Melbourne University Press 2014) and she has also recently released Rebellious Daughters with Maria Katsonis. Her short works have been published widely in Australia, Scotland, UK, Israel, USA and Canada, as well as in Best Australian Stories and Best Australian Essays. She is a blogger-in-residence for Writers Victoria and her private blog was a finalist for Best Australian Blogs 2014. You can find her at leekofman.com.au or on twitter @leekofman.

Last year I pitched a short memoir to a notable Australian literary magazine. It was a story from my childhood about how I helped my parents, then dissidents in the Soviet Union, to hide forbidden literature during a KGB raid on our home. The editor, without reading my memoir, rejected it, saying they were interested in publishing writing about Australia only.

The rejection was no surprise. On several occasions I had been told by publishers interested in my work that they only want writing set in Australia. Still, this particular rejection deflated me somewhat. Nowadays, sadly, one expects the commercial publishing industry to take less risks, as they court large audiences. Historically though, and in some cases still today, certain publishing houses have been driven more by art than business. And so are all literary magazines I know of; they aren’t in this game to make a profit and are usually more adventurous in their interests. I hoped, at least as far as that reputable magazine went, my work would be judged on the merit of the writing rather than its geographical orientation.

It seems the reluctance to publish those of my works set elsewhere I keep encountering isn’t just about commercial considerations, but also has something to do with the current notions about what Australian writing should be. But must Australian writing be delineated solely by the parameters of the local rhythms of winds and surf, the bush with its kangaroos and eucalypts, the poetry of spacious suburban brick houses or the rough and tumble of Redfern? If so, then we should claim D.H. Lawrence, one of the better known troubadours of Australian outback, as our own. And, increasingly, Australian reality is becoming layered with other-land experiences. Strangers who plant their roots here bring along remote tales and, in this era of easy travel, so do locally born people. Can we then expand the definition of Australian writing to reflect these changes? Shall we add pirozhki to the literary menu of pie and vegemite? But then some publishers might, with some justification, worry about the possible loss of a specific Australian sensibility in the globalised muddle. It is difficult to have a proper conversation about the nature, and the future, of Australian writing within the space of this small article. Still, I’ll return to this issue later. First, though, let me tell you about my own motives – why I keep making my writerly life here much harder than it might otherwise be if I focused solely on local themes. My greatest literary misfortune is that to some extent I’m afflicted with what I’ve come to think of as Chagall’s curse. A Russian-born Jew like myself, the artist Mark Chagall spent almost two-thirds of his life outside of his birthplace after fleeing the Soviet revolution for France. And yet Chagall’s art had always been haunted by Vitebsk, the city where he spent his formative years. Its warm chaos of cows and roosters, violinists and rabbis, weddings processions and crooked, gaudy houses clutters Chagall’s made-in-France canvasses. Not once was he criticised by his contemporaries for this persistent preoccupation with his past, but, as he wrote in his autobiography, he simply couldn’t help himself.

I can’t help myself either, as I am a writer embedded in place, or rather – being non-monogamous by constitution – in places. Geography is never a mere background in my stories. My characters, whether fictional or real, are shaped by the places they dwell in, and my places are characters in their own right too, with distinct personalities. They are also integral to the emotional atmosphere of my works. I am particularly attracted to discovering the specifics of cities.

Perhaps places matter so much to me because geography in my life has been permanently impermanent, with my two bouts of migration – from Russia to Israel, then from Israel to Australia – and with numerous moves within each of these countries. That known proposition that once you leave a place important to you it is likely to turn into your personal myth, holds true for me. But then, most of the places I left behind were already mythical to begin with. Like Chagall, who came of age in a volatile atmosphere of pogroms and communist uprisings, I, too, spent my first twenty-six years in intense places, dominated by Russian and Middle Eastern dramas.

Personal mythology is one of the most powerful drivers in writing that I know. It can be both a blessing and a curse for an artist. Up until thirteen years ago, when I decided to stop writing in Hebrew and began publishing work in Australia, I saw this as a blessing. I was never short of writing material. But what do I do now? What if Sartre was right when he declared that an émigré writer has no subject matter?

It’s not that Australia doesn’t inspire me. The first book I published here, The Dangerous Bride, is sub-titled A memoir of love, gods and geography. It is a book about romantic love, but it is also my love song for Melbourne. I’ve written about Perth, Sydney and the countryside too. Yet, there are other not-yet-sung-enough places inside me – Siberian towns choked with coal and snow; Odessa in spring smouldering with lilac and roasted chestnuts; Ashdod’s beaches littered with joint butts and Bob Marley; and the heavily made-up, deeply cleavaged nocturnal Tel Aviv. I am done and undone by these mighty cities which, to my mind, surely possess some universal appeal too. Yet Australian publishers tell me my geography isn’t of interest to local readers. I wrote ‘my geography’ automatically and now I think – perhaps this is the key. What if the reason behind all those rejections of mine isn’t the stated one – a desire for locally set writing, but one publishers might be reluctant to voice: the rejection of the places that obsess me? After all, Australian writing – whether the editor of the aforementioned literary magazine is aware of this or not – has long now sprawled far beyond Australia. Every year books set in foreign places are released here, also by the heavy players in the publishing industry. Michelle de Kretser’s wonderful novel The Hamilton Case, set in Sri Lanka, enjoyed critical and commercial success, as did Maxine Beneba Clark’s Foreign Soil, the stories of which traverse Australia but also Africa, America and Europe. Burial Rites, Hannah Kent’s historical novel about Iceland, is an international bestseller. This year Rajith Savanadasa’s novel Ruins, also about Sri Lanka, was released to much acclaim.

So if it is Russia and Israel that turn publishers off, then why? Perhaps it is because Australians travel there less, or hardly ever meet local Russians and Israelis, both tiny minorities in this country. A friend with whom I discussed my Chagallian affliction told me she did an Internet search on stories about Russia and Israel in the Australian media and only stuff about political conflicts came up; there were no stories of human interest. This state of affairs must also have some, even subconscious, impact on publishers when they consider my work. There may be other reasons which I am unaware of. Whatever the case, books about these places (beyond the classics that is) are difficult to find in Australian bookshops. Yet such works, whether by local or translated authors, often do well in many other countries. Think about the successes of Vasily Aksyonov, Shani Boianjiu, Ayelet Tsabari, Dmitry Bykov, Amos Oz, Etgar Keret or Svetlana Alexievich, the winner of last year’s Nobel Prize for literature, to name a few.

Since The Dangerous Bride was released two years ago, I’ve had a lot of feedback from its readers. A frequent theme running through their responses has been the enjoyment people get from the passages discussing my Russian and Israeli days, often along the lines of ‘I didn’t know much about Israel, but now I’d like to find out more.’ So is it possible that there is some hunger for my places out there after all?

The picture I have painted here might be sinning in its black-and-whiteness. Not all Australian publishers shun my ‘foreign’ works. That memoir about the KGB raid was picked up by another Australian magazine, The Lifted Brow. Griffith Review has always been receptive to my works, regardless of their locations. And a short story of mine, also set in the Soviet Union, was selected last year for Big Issue’s annual fiction edition. But before its happy ending, that story also struggled for some years to find a home here. I’ve never had as much trouble placing my locally set works (as long as they were of literary merit, of course).

This article is not intended as a personal complaint, however. Rather, my wish is to use my story to come back to, and expand on, my initial question – what should Australian writing be? I find it difficult to think that Australian audiences aren’t interested in certain countries, cities, seas, that they don’t want to know about what is happening in those turbulent places beyond their, usually depressing, news items. Personally, as much as I love reading about the geography that already belongs to me, I also love books that transport me to locations I know little about. Then, a well-told story can unfold even in Bentleigh as far as I am concerned. I want to believe there are enough readers here who feel similarly, who seek both the familiar and the strange.

Recently, two novels set in ‘my’ places have been released in Australia by major publishers, and to much acclaim: Katherine Brabon’s Vogel-winning The Memory Artist describing post-Soviet Russia (Allen & Unwin) and Leah Kaminsky’s Waiting Room about Israel (Random). ‘The universality of the book is deeply affecting,’ wrote an SMH reviewer about The Memory Artist. Is the appearance of these works a harbinger of changing attitudes, or will they remain solitary exceptions? Whatever the case, I’ve been cursed, and curses, fairytales tell us, are difficult to dispel. Sometimes it takes a hundred years. I’ll be waiting. I mean, writing.