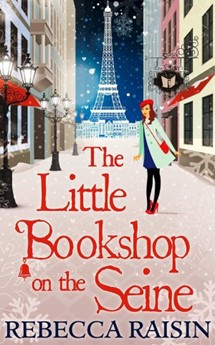 When books are included for AWW as “General fiction”, we get a mixed bag. Sometimes the stories blur genres, including strong elements of romance or a speculative bent. In other instances, they mix up the time setting, with one strand of the novel contemporary and another historical. Today’s featured books all fall into this genre-blurring or genre-bending category.

Sam at Sam Still Reading is a fan of Rebecca Raisin’s book The Little Bookshop on the Seine (2015) which, she writes, “isn’t strictly a romance”:

When I’m looking for a heart-warming story, I often turn to Rebecca Raisin’s books. I know there will be a happily ever after and I know that there will be intricate descriptions of scrumptious food. In The Little Bookshop on the Seine, I had two added bonuses – gorgeous descriptions of Paris and the return of Sarah Smith, the ultimate booklover and bookseller. Sarah lives and breathes books, plus she truly cares for them.

In this novel, Sarah gets out of her comfort zone by agreeing to a bookshop swap with Sophie, who runs Once Upon a Time in Paris. It’s a challenge for Sarah to leave the friendship and comforts of small town Ashford, but she hopes that it will give more chances for her to see boyfriend Ridge, a freelance investigative reporter. When Sarah gets to Paris, the place is just as she imagined – until she gets to the bookshop. Inside it’s utter chaos, with staff turning up when they want to, money going missing and books being taken. Sarah needs to find her inner boss to take control, but Ridge is further and further away…can her new friends help her to find her feet? (Full review here.)

It isn’t hard to see why Sam, an avid reader herself and AWW’s romance round-up editor for this year, loves Sarah and her occupation – and who doesn’t love Paris as a setting?

Another genre-blurring title reviewed this year was Jane Rawson’s Formaldehyde (2015) which won the 2015 Seizure “Viva La Novella” prize. Tsana, our Speculative Fiction roundup editor, was expecting more speculative content than she got, but she acknowledges the novel does have SpecFic elements. Describing it as a “weird” book, she nevertheless makes it sound intriguing:

The story follows four people, two each twenty-two years apart, and some of the ways in which their lives intersect. There’s Paul, whom one could call the main character, although the story doesn’t really revolve around him. Paul’s story starts when he finds himself declared dead although he clearly isn’t (actually, this confused me for a little and had me thinking he might be a ghost or something), and leads him to embark upon trying to get the paperwork fixed so that he can exist again.

Along the way, he meets a girl called Benjamin and has a brief fling with her. The other two characters, whose stories are mostly told twenty-two years earlier, are Paul’s parents, Derek and Amy. The two women have the most speculative elements in their stories, surrounding Amy’s pregnancy and Benjamin’s age, but I probably shouldn’t say more than that. The book masterfully ties the lives of four people together in unexpected ways. (full review here)

A third novel described as a “genre-bender” is Anna Romer’s debut novel, Thornwood House (2013), which Yvonne says she dug out from her To Be Read pile. Yvonne sets the scenario for this “romantic mystery story”, which she describes as “Australian Gothic”:

When Audrey Kepler and her eleven-year-old daughter, Bronwyn, move to Thornwood House on the outskirts of  Magpie Creek, a small town in rural Queensland, it doesn’t take them long to fall under its spell. The house, willed to Audrey by Tony Jarman, Bronwyn’s father, was once the home of his grandfather, Samuel Riordan.

Audrey finds a faded photograph and a letter in the old house and becomes obsessed with the rumour that Samuel Riordan killed Tony’s grandmother back in the 1940s, on his return from the war. In her attempt to discover the truth she uncovers another family tragedy and in doing so places herself and her daughter in danger.

The story moves smoothly between three time frames: 2006, the 1940s and the 1980s, giving glimpses of the Magpie Creek community in those eras. It is told from Audrey’s perspective as she and her daughter adjust to rural life so different to the hectic city living they left behind. Audrey’s obsession with Samuel Riordan is fed by letters, a diary and the reluctance of some people to talk about the past. The more she delves, the more she discovers about Tony that raises many questions about the man she thought she knew, his family and the manner of his death. Eventually Audrey pieces together all the clues and makes the connection between the past and the present. (full review here)

Do you know of any other books by Australian women which use time transitions? What did you think of them?

Jane Rawson can be found on Twitter @frippet, on her blog.