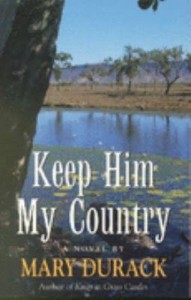 For the second in our series of forgotten writers and classic books, Dr Robyn Greaves features author Mary Durack who was born 20th February 1913. Thanks, Robyn.

Dame Mary Durack (1913 – 1994) was a prominent mid-twentieth-century West Australian writer. The bulk of her publishing career took place during the 1950s–1980s. Western Australia, the national character, and Aborigines were key concerns in her writing. Durack located qualities of the Australian character in and through the environment, which she saw as strongly influencing and shaping national identity. Durack used a range of publishing mediums to explore her themes, including newspaper and magazine articles, books, and film. She wrote children’s stories, novels, two volumes of family history, and plays amongst other publications.

Durack’s family were among the early cattle pioneers of the nineteenth century on whom Australian nation-building myths are built. Durack herself inscribed these myths in her family histories, Kings in Grass Castles (1959) and Sons in the Saddle (1983). She also explored her personal experience of life on outback stations in her novel, Keep Him My Country (1955). Mary’s grandfather, Patsy, was eighteen years old when the family migrated from Ireland to New South Wales. They settled in Goulburn, working on a farm there. Patsy’s father, Michael, died as a result of a horse and cart accident in the year of their arrival. Patsy took on the mantle of provider and soon acquired a hunger for land, moving from south-western New South Wales up into south-western Queensland, “taking up” large parcels of land along the way. In Kings in Grass Castles, Durack describes her grandfather riding

on and on, hungry for land and more land and the security that seemed always just out of reach. Land hunger was a disease of his time, leading many besides himself on pastoral trails that ran out as often as not into sand and ruin. (Kings 163)

Durack’s father, MP, and uncles were to continue this drive into the Kimberley region of north-western Australia on an epic pioneering trek to establish pastoral properties there.

As a young child, Durack and her siblings spent large amounts of time on the family’s Kimberley properties and developed strong ties to the region, which Mary expressed in her writing and her sister Elizabeth explored through painting. The sisters often collaborated on projects throughout their lives. Mary received her schooling in Perth, attended university there, and started work at a West Australian newspaper before marrying Captain Horace Miller, an aviator. While the marriage produced six children and endured until Horrie’s death in 1980, the couple spent many years living apart. Mary maintained a home in Perth, while Horrie based himself in Broome to manage MacRobertson-Miller Aviation (which was later sold, eventually becoming part of Ansett).

Durack was a significant public figure in her time. Fellow writer Henrietta Drake-Brockman wrote about the Durack sisters in Walkabout magazine’s “Our Author’s Page”,[1] describing them as the embodiment of “an often imagined, rarely-realized conception of Australian womanhood” that encompassed traditional female domestic qualities (“competent in the housewifely arts, very easy to look at . . . devoted mothers”) alongside being comfortable in the outback (“undaunted by difficulties and even hardships, ever resourceful”). Each woman is described as

blessed with the quick bubbling humour of their Irish ancestry, tinctured, of course, with a dash of that peculiar bitter Australian irony which has been brewed from hard soil and red dust and vast empty spaces far from the Irish green, and which lends to their creative work its inherent essence of Australia. (41)

Like many of her fellow female writers, Durack was able to utilise middlebrow forms to speak to the nation and explore ideas around identity both within and beyond the parameters of family commitments and domesticity. In an interview, Guilia Giuffré asked Durack if she ever felt disadvantaged by her gender and Durack answered:

Never, no. I suppose I could have done a lot more if I’d had a bit more help with the kids, but ‘mother looked after the children’, and that was that. I did the other things when they were in bed, or when I could. Most women writers that I know seem to have done the same. (95)

While hers was a position of relative privilege, Durack knew what it was like to work for a living, to be a stay-at-home wife and mother, and to live and work in the north.

Despite espousing a traditional view of women’s roles, Durack did not believe that a woman’s place was necessarily restricted to the home. She held that a woman “has the right to select her own role, make a success of what she can” (Giuffré 97). When quizzed on the compatibility of writing and motherhood, she said that “[v]ery few people . . . could live on books” and considered that if she had chosen to go out and work she would have had “just as much time as a mother looking after a home and kids” (96). Although she was a dedicated writer and detailed in her research, Durack claimed that she did not care whether or not she was remembered for her writing. For her, value lay in “the association of many years with family and friends” (98), which meant that she often placed peoples’ needs before her writing, displaying a traditionally female characteristic of concern with relationships before self.

Despite these traditional views, Durack’s writing about Aborigines suggests a serious ambition to raise consciousness about issues of race. If her persona was distinctly feminine, her public voice was forthright and assured. Throughout her lifetime she became a crusader for Aborigines, a spokesperson on their behalf. Her views reflected contemporary attitudes but she also saw beyond these, envisioning a society of cultural tolerance and acceptance, making her one of the progressive thinkers of the time in the area of race relations. Her ongoing relationships with Aborigines who lived on the family properties attests to enduring connections formed through often difficult circumstances in remote regions. The damming of the Ord River in 1972 saw the flooding of one of the Durack’s first Kimberley properties, Argyle Downs. This deeply affected Mary, who referred to the region as her “spirit home”. The homestead has since been recreated and it is in the garden of the Argyle Homestead Museum that Mary Durack is buried. Hers is one neglected voice amongst the many discourses of national identity during a formative period in Australia’s history.

[1] The article appeared in September 1952 with no identified author. The magazine corrected the omission of the author’s name in the October 1952 edition.