Henrietta Dugdale’s A Few Hours in a Far-off Age 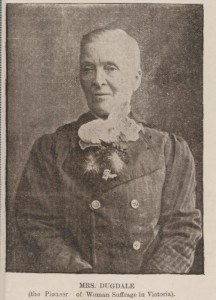 Thus declares the narrator at the close of Henrietta Dugdale’s only novel, A Few Hours in a Far Off Age, published in 1883. A utopian speculative fiction, A Few Hours in a Far Off Age is narrated by an unnamed woman from the 1880s who is transported in a dream to Alethia, an island that rose from the ocean after a long glacial period, thousands of years in the future. Alethia supports what is apparently the only human civilisation on earth, an idyllic community of physically beautiful and intellectually advanced people called Alethians, who live in sexual and political equality and social harmony. A Few Hours in a Far Off Age represents the coalescence of Dugdale’s ideas about how society and gender relations could be improved – her dream for a future “bright with truth and hope” (105). Dugdale, born in London in either 1826 or 1827, emigrated to Australia in the 1850s with her first husband (Oldfield, 134). She was a staunch advocate for social change and dedicated her life to campaigning for women’s enfranchisement, women’s rights to education and property ownership. She also called for changes to marriage laws and female dress reform, so that women could choose not to wear corsets and restrictive skirts. Dugdale herself preferred to wear a home-made “bloomer suit” consisting of wide legged trousers and tunic with no corset (Oldfield, 135). She described herself as the first woman suffragist in Australia, claiming that she “publicly advocated the moral right of woman to her share in political power” from as early as 1859, and established Australia’s first society dedicated to women’s enfranchisement, the Victorian Women’s Suffrage Society, with fellow suffragist, Annie Lowe, in 1884 (Oldfield, 134).

In A Few Hours in a Far Off Age, the narrator spends 36 hours in Alethia, during which time she witnesses the everyday lives of Alethians. Following one family closely, she learns that the Alethian education system requires parents to educate their children in specially designed galleries, the exhibits of which facilitate holistic learning in lessons that combine scientific, engineering, historical, and geological instruction. History lessons are used to illustrate the cultural evolution of society and knowledge, and work as a point of comparison between Alethian social organisation, characterised as positive, and 1880s Australian society and law, which the narrator represents in negative terms. Alethian children are uniformly respectful, studious and disciplined, taking pride in their studies. The narrator also notes how Alethians dress in loose, flattering garments, partake in daily exercise, and eat a vegetarian diet with two set meal times each day. Each morning is dedicated to working and learning, and each afternoon is time for socialisation and pleasure. Alethian society is secular and religion is identified as the root cause of women’s subjugation.

While the prose of A Few Hours in a Far Off Age leaves something to be desired for the literary connoisseur, it offers readers a fun excursion into a quirky interpretation of how the future might have been. It is therefore a valuable artefact of cultural history, and particularly of Australian first-wave feminist history, touching, as it does, on many of the issues early campaigners for women’s rights fought for. A Few Hours in a Far Off Age was written to fulfil specific political ends, namely to advocate women’s emancipation. The narrator takes pains to articulate, using the juxtaposition of the Alethian utopia, how unequal political powers between men and women in her 1880s Australia inhibits happy marriages and renders women vulnerable to abuse. She also suggests that the exclusion of women from industry and politics prevents humanity from reaching its full potential: in Alethia’s history women’s involvement in engineering, science and agriculture has led to discoveries that advanced society. The realisation that petroleum was best used as fertiliser, for example, was made by a woman, and by the combined energies of two inventors, a man and a woman, the flying machines ubiquitous to Alethian households were created and made safe for use.

At a number of moments in the novel the narrator’s point of view abruptly changes; she shifts from describing Alethia and marvelling at its perfection, embedded in the imaginative story-scape of the narrative, to expressing her own interpretations of the ills of nineteenth-century life and actively pressing a feminist agenda. In these moments the narrator directly addresses her readers, urging them to take up the cause of women’s emancipation. Discussing women’s fashion in the nineteenth-century, which required the extreme shaping of the natural body with corsets and bustles, the narrator speaks to her 1880s readership: “there you are, my hideously shaped contemporary!” (46). Women’s fashions of the 1880s, the narrator continues, calls for “reduction of your waists” that causes ribs to take over “the place nature intended only for delicate organs” and injures their “perfect health… which is requisite for [a] healthy mind” (48, 46 – 47). “Nature intended [women] should have been intellectual, kind and truthful” but the contortions of the body dictated by fashion has reduced women to “weak-brained tools”, a state of inferiority cultivated by “cunning men” who have distracted women by fashion so that men may “make laws affecting you [women] and your children… – as he does over any other animal he possesses” (47, 48). The narrator’s polemical discourse concludes, after more than eleven pages in which numerous other topics related to women’s subservience are discussed, with her own pledge to strive to alter “man’s tyrannical laws… until there be just legislation… for the progress of all human kind” (57, original emphasis). The only way to achieve equal rights and positive change for the species, the novel argues, is through women’s enfranchisement.

Dugdale continued to fight for women’s rights, and for their right to vote in particular throughout the campaign in Victoria and across Australia more broadly, for the rest of her life. She died in 1918, then into her nineties, after being able to cast her vote at several elections (Oldfield, 135). She had been a radical in the first-wave feminist movement in Australia, particularly because of her views on the Church, but she was always accepted and celebrated for her contribution to the cause (Oldfield, 135).

Dugdale, Henrietta, A Few Hours in a Far Off Age, McCarron Bird & Co., Melbourne, 1883. NB: the novel can be read online via the NLA website.