The Quiet Brilliance of Eleanor Dark 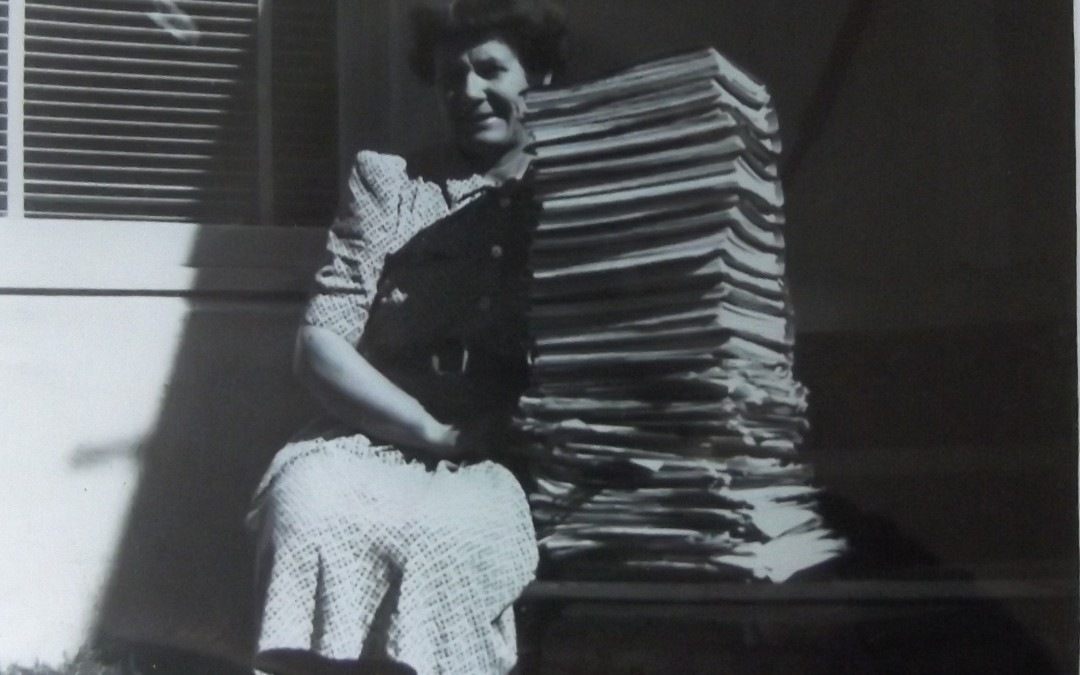 Above my desk I keep a black and white photograph of a woman sitting outside on a bench in a checked house dress, casually leaning next to an enormous pile of papers. The woman is Eleanor Dark, and the pile of papers is the manuscript for Storm of Time (1948), the second novel in her landmark historical trilogy detailing the first decades of British occupation in Australia. You’d think that Dark, by then a well-respected writer with seven novels under her belt, would be looking at least a little proud of herself, having just completed her eighth and longest book. But in the photograph, Dark is squinting into the camera and only almost smiling. She sits back, a little behind the tall stack of papers. It casts a wide shadow over her.

I love this photograph because it exemplifies the qualities I most admire in Dark as a writer and as a person. She had an enormous capacity for work, producing ten remarkable novels in twenty-seven years, including a trilogy that achieved canonical status and won her considerable fame during her lifetime. Yet, she disliked publicity, hated having her photograph taken, and chose to live in the Blue Mountains, away from the bustling cultural scene of interwar Sydney. ‘My life,’ she told an American academic in 1942, ‘has been uneventful to the point of being humdrum’ (qtd. Wyndham).

This statement was patently untrue. Dark was born Eleanor O’Reilly on 26 August 1901. Her father was the writer and teacher Dowell O’Reilly, who introduced the first bill for women’s suffrage into New South Wales Parliament. Her aunt was the sex education campaigner and social reformer Marion Piddington. The famed poet and academic Christopher Brennan was a family friend. ‘Pixie’, as Eleanor was known by her family, had a somewhat tumultuous childhood: her parents’ marriage was stormy and her mother died when she was thirteen. She always loved to write but financial trouble prevented her from attending university. Nevertheless, she began publishing stories under a pseudonym in her early twenties. She married Dr Eric Dark in 1922, who believed in the importance of her work, and provided a steady income and a housekeeper so Eleanor could devote herself to writing. In 1923 the Darks moved to Katoomba, eventually building Varuna, which was gifted to the public by her son Michael for use as a writers’ centre. It is in Varuna that the original of my favourite photograph hangs.ark’s first novel, Slow Dawning, was published in 1932. It was a potboiler romance, prompting her family to joke about ‘slow dawning, fast Dark’. The book is hard to come by these days. Rumour has it that Dark herself is responsible for this: so unimpressed by her own efforts, the story goes, the young writer bought and burnt all the copies that she could find. Her second novel, Prelude to Christopher (1934), was much better received, winning the Australian Literature Society’s coveted Gold Medal. She would win again for Return to Coolami, published in 1936. Literary modernism in Australia is most often associated with Patrick White, but five years before the publication of White’s first novel, Dark’s Prelude to Christopher offered a stunning, startling example of Australian modernist writing. Charting the breakdown of a eugenicist experiment to create a ‘perfect’, island-bound society, the novel’s polyvalent narrative interrogates the social hygiene discourse of the time, and paints a searing portrait of psychological trauma. In the narrative, Dark adapts modernist conventions to tell a daring narrative without sacrificing readability. Prelude, and all of Dark’s cosmopolitan, contemporary novels of the 1930s, must be considered prime examples of Australian modernism. Dark’s popular reputation has primarily rested on the historical trilogy which began in 1941 with The Timeless Land. The book was immensely well-received, reviewed in the American press and given to troops serving overseas. Later, it became a staple on the New South Wales high school syllabus and was made into a television mini-series during the 1980s’ mania for Australian history. For me, however, it is Dark’s earlier novels that deserve to be rediscovered and reread. These books still feel extraordinarily modern: they deal with issues that continue to trouble us today, doing so in prose that has aged better than that of the historical work. Ironically, for me it is these earlier works that seem ‘timeless’.

Waterway (1938), Dark’s fifth novel, is perhaps the greatest of these early works. The story takes place over a single day in Sydney, detailing both ‘humdrum’ and momentous occurrences in the lives of a group of sixteen characters. The country is still recovering from a devastating depression, another war seems imminent, and in the year that saw the state-sanctioned celebration of 150 years of white Australia, Dark’s characters question the validity of some of the values on which that nation was founded. Waterway is an incredible book: it is philosophical, reflective, thought-provoking and very engaging. Miles Franklin, who never praised a writer if they did not deserve it, was appreciative of this last quality: ‘You keep a fella tense all the way thru’ she wrote (qtd. Brooks & Clark 191). Reminiscent of Virginia Woolf’s Mrs Dalloway (1925) but still unmistakably Australian, Waterway asks pertinent questions about how we live together as a community, about the debts we owe each other and to the land that supports us. Indeed, Dark was a passionate environmentalist. She was a founding member of Blue Mountains conservation groups and in 1940, she pre-empted Al Gore by sixty years by stating that ‘we need a working agreement with the earth we live on’ (qtd. Brooks & Clark 344). In Waterway we also recognise Dark as an early supporter of Indigenous rights: the novel was one of the first to refer to the events of 1788 as an ‘invasion’.

I have read Waterway once a year for the past four years, and I continue to marvel at how relevant it seems to the increasingly fractured socio-political climate in which we live. Here is the aged Professor Channon, railing against the seeming arrogance of the human race:

He did not want to be a detached and dispassionate observer of [humanity’s] fate. … We are such stuff as dreams are made of … Dreams of an achievement which might have been and which failed. … We were not worth it. To inherit the earth. … That, he thought, is a big phrase … A great and arrogant phrase …. I claim! But not enough! This little bit of the earth, that little bit of the earth—mine, thine—how poor and trivial a conception has this vast intellect evolved. (121-122)

This is the quiet brilliance of Eleanor Dark: she created works which both perfectly reflect their own time and remain equally readable eighty years later.