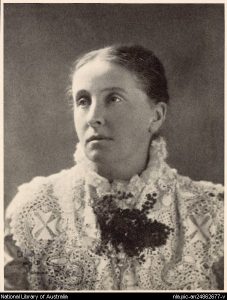 Ada Cambridge, astute social critic and author, began her writing career proper in 1875 to, as she put it, “add… to the family resources when they threatened to give out” (ADB), when she published the novel Up the Murray as a serial in the Australasian newspaper. She had previously had a foray into the literary world with the publication of a tract inspired by her devotion to Anglicanism, titled Hymns on the Litany and Two Surplices. A Tale, in London in 1865. Up the Murray heralded a different direction for Cambridge: her later work, which comprises fiction, poetry and memoir, was much less religiously inclined and takes as its subject matter, instead, social and cultural expectations for, and behaviours of, men and women.

Born at St Germans in Norfolk, England in 1844, Cambridge emigrated to Australia in 1870 after she married her curate husband, George Cross, who was “committed to colonial service” (ADB). They arrived in Melbourne but spent many years travelling from parish to parish across the Victorian countryside as her husband’s situation changed; they variously lived in Wangaratta, Yackandandah, Ballan, Coleraine, Bendigo, Beechworth, and Williamstown. Cambridge’s experiences in these towns, as well as her experiences amongst the “Anglo-Australian aristocracy” (ADB) into whose society her literary talent soon brought her, provided much of the material for her writing. She often wrote about women, the colonial marriage market, and women’s choices and potential for equality and happiness in marriage, using the romance genre to interrogate and challenge social expectations of women as wives and mothers. Issues of race and class, particularly the unfairness of discrepancies in privileges based on these categories, also find voice in Cambridge’s writing.

In 1887, Cambridge anonymously published an anthology of poems titled Unspoken Thoughts. The sentiments expressed in Unspoken Thoughts are, for the most part, radical for the moment of their publication and represent the interests of her oeuvre at their most intense. Persistent themes in the collection include a questioning of religion which amounts, in some cases, to a denouncement of organised religion, praise for earthly pleasures, pursuits, and love, a concerned consciousness of social ills including the conditions of the impoverished working class, the social condemnation of prostitution and the bodily tyranny exercised by men over women in marriage, and the right to choose to end one’s own life. Cambridge reworked a number of the poems for inclusion in a collection she published in 1913, The Hand in the Dark. Cambridge’s works, which include a total of 28 novels, numerous short stories, essays, poetry, and multiple autobiographies, reveal a nuanced, contradictory writer. Taken together they bamboozle even the sincerest attempt to discover within them a consistently expressed world view. For example, in her sixteenth novel, A Woman’s Friendship (1889), which deals with the questions of the women’s movement of the time, including equity and happiness in marriage, extra-marital attraction, women’s rights (in particular voting rights), and women’s place in society, Cambridge’s stance on whether women ought to be granted the franchise remains tantalisingly unclear. Rooted in place, A Woman’s Friendship offers a startlingly rich account of Melbourne in 1888, the year of the Melbourne Centennial Exhibition, the backdrop to the novel’s interest in the highs and lows of The Reform Club, a fictional group of three, two married women and one single man, who declare themselves advocates for social change and gender equality, and determined to show that platonic relationships between the sexes can be the stuff of fact, not fiction. Ultimately the novel appears to support women’s enfranchisement and liberation but warns that sexual tensions and jealousies could impede objective political functions. As Susan Lever says, A Woman’s Friendship “refuses to be a mouthpiece for standard liberal opinion” (31).

Cambridge did not actively engage in political issues outside of her writing but many years after she published A Woman’s Friendship, in her autobiographical childhood remembrances published as The Retrospect in 1912, she states that she firmly believed in women’s capacity for politics (“I really do not think the skies would fall… the men would get used to it in a week and reconciled in a month”) but that she would not be “that woman [in politics] for anything you could give me” (43). She “felt her own political action lay in the power of her pen to provoke and persuade” and valued the individual who had the “courage to stand alone”, to “speak out”, and defend that which their conscience tells them is right (Tate, 121, 135). Cambridge’s literary success overseas is representative of the potential for transnational appeal and consumption of Australian fiction in the late nineteenth and early twentieth centuries, overturning the persistent myth that Australian writers had to commit to an expatriate life to achieve a literary career of significance. Cambridge lived, worked and did business in and from Australia for the majority of her literary career: she returned to England to visit in 1908, and went with her husband in 1913 to live there until 1917 when, after her husband’s death, she moved back to Australia. She published sixteen pieces of serialised fiction in Australia between 1875 and 1889 in newspapers and magazines, and achieved international fame with the publication of a novel, A Marked Man, in London in 1890. In the years following, she published, also in London, the acclaimed novels The Three Miss Kings (1891) and Not All in Vain (1892) but continued to publish serialised fiction in Australia, including Materfamilias, a first person narrative of a woman’s life from marriage until she becomes a grandmother, which appeared in The Australasian in 1898. From this time, she continued to have success publishing her work in England and Australia, though memoir and essay writing came to dominate her later output. Her last novel, The Making of Rachel Rowe, was published in London in 1914.

Cambridge died in Elsternwick in Victoria in 1926. She had, for a long time, been a household name but was forgotten until the feminist movement in the 1970s and 1980s reinvigorated interest in and appreciation for her work. Her significance as part of Australia’s literary tradition is now, justly, receiving greater recognition. In 2005 the Williamstown Literary Festival launched the Ada Cambridge Prizes in her honour. The prizes are offered annually in four categories: biographical prose, poetry, and short stories and graphic short stories for younger writers.