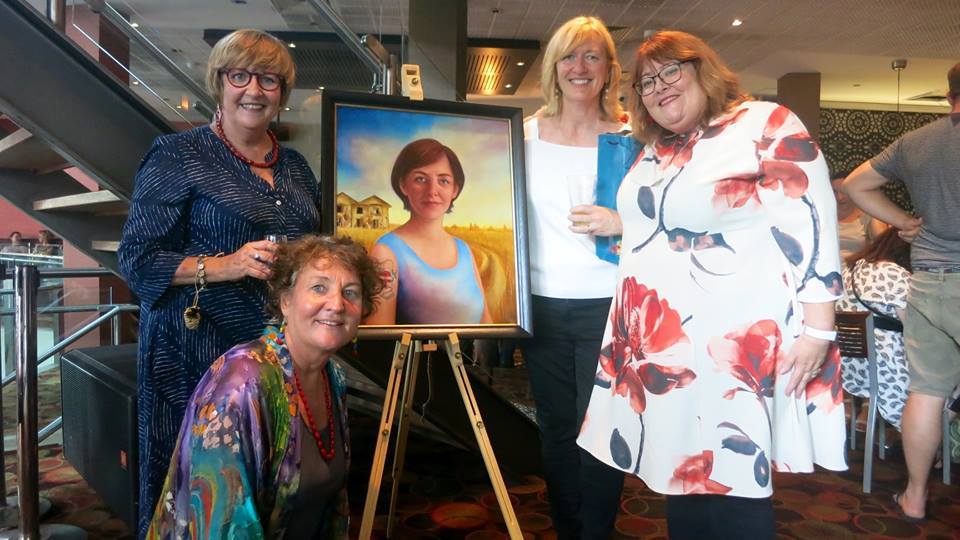 “I read the manuscript at the weekend and I couldn’t put it down. We would like to publish.”

Whenever we relay the contents of this email from the world’s biggest publisher, Random House, in one of our author talks, a buzz of excitement goes through the room. After all, what budding writer wouldn’t want to hear these words?

But it’s what the publisher wrote next that means the most to us.

“I can’t believe it was written by more than one person.”

We, five Sydney friends – myself (Jane Richards), Denise Tart, Jane St Vincent Welch, Jenny Crocker and Maddy Oliver, who decided on a fateful book club weekend away together back in 2010 to try our hand at writing a joint novel – were thrilled. Not only were we being published, but our efforts to create a cohesive joint work of fiction had also secured us a three-book option with Random House, now Penguin Random House. The original five members of the Alice collaboration, authors of The Painted Sky

In 2015, The Painted Sky, a romance/family saga/mystery hybrid, was published in Australia under our pen name, Alice Campion. Months later it was also released in Germany by Ullstein after being the subject of a bidding war.

Then in February this year, a sequel, The Shifting Light, written by four of the “Alices”, was also published. Together we had achieved what we had been assured was impossible – to write novels together that had one voice. The best thing? Our work was not seen as a gimmick turned good, but rather as a well-received, legitimate work of genre fiction. Yet despite our success, many people find the concept of writing a novel in a group of three or more a strange one. This is despite the fact that collaboration is the norm in the TV, film and comedy writing worlds.

While there have been many pairs of novelist writers – English husband and wife crime-writing team Nicci Gerrard and Sean French, aka “Nicci French”, are one example, and Dymphna Cusack and Florence James, co-authors of the Australian classic Come in Spinner are another – as far as we can ascertain we are the only larger group to have written a published genre novel.

So how did we do it?

As mentioned we decided to try and write a book together when we were away for a weekend with our book club. After lunch, the conversation veered from our chosen novel – Crime and Punishment – and we decided a more interesting way to discuss Dostoyevsky could be via a trip on the trans-Siberian railway. How to fund it? Why we’d write a best-selling novel of course! (It was a long lunch.) Before we knew it we had settled on a genre, a rough plot, a few characters and some scenes that we would want to read (an awkward dinner party being one of them).

The fun weekend ended and we all went our separate ways. But then we began writing. A scene was emailed around, then another. These initial jottings were discussed and tweaked and we were soon meeting and writing regularly. It seemed that once our words were on paper we started to feel we had the makings of a real story and we wanted it to be as good as we could make it. Our throw-away fun idea for a novel had somehow morphed into a serious project.

We needed a system, and we soon came up with one.

We devised an over-arching plot (always subject to change) which we then divided into scenes. Each week we would assign these and then go away individually to write them. We would then email them to each other to be read and marked up and, then, when we’d meet again, we would each read out our scenes for discussion: what worked and what didn’t? Was the scene moving the story forward? Was the dialogue believable and had our characters remained “in character”? Then, most importantly, each scene would be given to a different person to revise. So by the end of the first book, just about every scene had been written, rewritten and then rewritten again by all five of us. This, we believe, was crucial in enabling us to find “Alice’s voice”.

With so many original and rewritten scenes flying it became clear that we needed someone to take control of the manuscript and keep the various versions of scenes in order. Denise stepped forward to be our “Keeper of the Word” and she was vigorous in keeping our story in order. She also kept an eye on the timelines and character sheets we had developed so none of us veered off course – crucial in a novel that involves flashbacks and mysteries that unfold over different generations. To help us ensure our five brains were all on the same page, we also drew maps of the properties and houses where most of our action was set and we sent around pictures of what each of our characters looked like.

Then, most importantly, we travelled literally to “the back of Bourke” where our first book was set, just to make sure we had a good sense of the place. Here we spent time talking to locals, farmers and their families and indigenous elders. Our visit proved invaluable: it helped us flesh out our characters and showed us what we had wrong – including even basic physical things like the colour of the soil. It also set us up on a bit of a mission to update notions of life in the bush. Far from the stoic, conservative, one-dimensional place that it is so often portrayed as, we instead wanted to show the place as we found it: somewhere where new technology is vital; where environmental concerns are at the forefront of many farmers’ minds, and where complex issues involving family breakdown, homosexuality, isolation and not belonging loom big – if not even bigger – than in the city.

After our first draft was completed we knew we had a strong story and believable characters but our ending was, well, flat. There was nothing for it but to blow up the last third of the book. We changed the ending, trimmed adjectives, tightened paragraphs and boosted our depth chargers – points in the plot that would blow up later to keep our readers interested. And after each scene had been rewritten and rewritten again we would ask ourselves – does this make the reader want to keep going? We then sent the book to some test readers before finally submitting the manuscript.

Writing in a group is not for everyone, but for busy women like us – we all work, we all have families – it is a great way to actually get words on a page. And this is no mean feat when you consider how many people have half-finished novels under their beds, or the perfect plot in their head that may never see the light of day. The Shifting Light  team of “Alices”

We found our collaborative writing was a bit like being in a sporting team: no-one wanted to let the side down by not turning up or by failing to produce. Of course life can and does interfere occasionally – but again, like a sporting team, if one of us is under pressure, another is there to help them out or to do some finessing.

Likewise it seemed that just when one of us was flagging, another was full of ideas. Solving plot problems is also easier in a group – after all, four or five brains is better than one, and having several sets of eyes on the manuscript meant our manuscript was “incredibly clean”, according to Random House. And we have recently discovered one fantastic other side benefit – it is much more fun going on road trips to promote books when you are with your friends! Group fiction would never work with a literary novel, which generally reflect very individual ideas and views of the world. But we believe it is a great vehicle for good, commercial genre fiction.

While none of us were published fiction writers before the Alice books, we do all deal with words or have strong elements of storytelling in our working lives. I have been a journalist for more than 30 years; Denise is a marriage celebrant with a background in writing for theatre and performance; Jane St Vincent Welch is a film editor; Jenny is a communications expert who creates public awareness campaigns and Maddy was involved in social research when we started writing.

Our books have taken us as far as Japan, where we presented a talk at the Japan Writers’ Conference in Kobe in 2015. We have also run workshops at the Wheeler Centre in Melbourne and at this year’s Sydney Writers’ Festival, where we also presented a talk. We have also appeared at the St Alban’s and Jugiong Writers’ festivals and have made many appearances at libraries and book clubs across NSW and Victoria. A portrait of ”Alice” by artist Sophie Haythornthwaite. The five original Alices sat for the portrait and a bit of each was included. It was later entered in the Archibald.

Alice is now gearing up for what could be her biggest adventure yet – running a 10-day workshop in Nepal as a guest of the Himalayan Writers’ Workshop from April 9-19 next year. Here participants can have a shot at “Group Fiction” while enjoying a fully escorted trip around Kathmandu at the same time. We are hoping to attract groups of friends, just like ourselves, on this trip which we know will be very rewarding – and lots of fun. Bookings are made directly through the Himalayan Writers’ Workshop website.