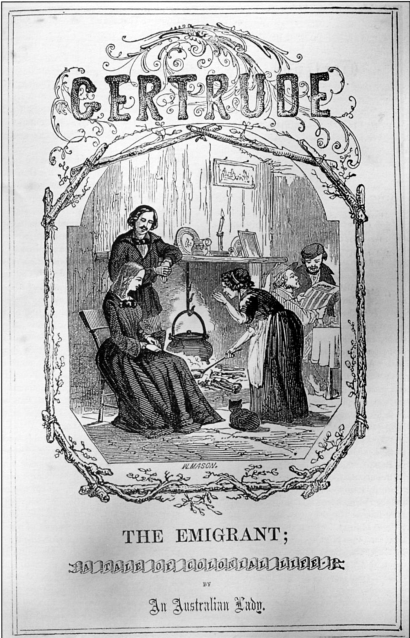 A review of one of Australia’s first novels

The ‘first’ Australian novel is contested, but Gertrude the Emigrant: A Tale of Colonial Life (1857) is the first novel whose author was born in Australia. Louisa Atkinson (1834-1872) was born on her parent’s property, Oldbury, in the region of Sutton Forest, NSW around 100 kms south west of Sydney in the Southern Highlands. This seems to be the setting for Gertrude though Louisa was mostly brought up in Sydney and was living at Kurrajong, further north, in the Blue Mountains when she wrote this in her twenties.

Louisa’s father died when she was young. Her mother, Charlotte Barton, remarried, badly, lost control of Oldbury, and brought up her children as a single mother while fighting the executors of her first husband’s estate through the courts. Charlotte seems to have been both a gifted and a determined woman. See her ADB entry (here) for more.

Gertrude in the novel is the orphaned daughter of a German father and English mother, brought up in Dorset by her great uncle, a schoolmaster. On her arrival in Sydney at age 19 she is plucked off the ship by Mrs Doherty, a widow and considerable property owner, to be her companion housekeeper.

“I WANT an honest decent girl if you have such a thing,” said a lady, to the Immigration Agent, on board of a newly arrived ship in Port Jackson. After musing and biting the end of his pen for a few moments he enquired,
“As a house servant?”
“Yes. Rather beyond that, as a responsible person, a sort of housekeeper; one that will not be above putting her hand into the cheese vat, or the beef cask; you understand.”
“Perfectly Madam.” And he mused again. “Yes, I think we have. Here Gertrude Gonthier.”
A young girl stepped forward with a modest air, feeling like a slave put up at an auction mart.

The novel takes the form of a relatively simple romance – the superintendent of Mrs Doherty’s properties, Mr Tudor, is an upright young man, though of course Gertrude’s head is turned by Charles, the dashing son of Mrs Doherty’s neighbour – but with the added elements of murder mystery, bush fire, a lost child, and Gertrude’s descent into service, before all is resolved acceptably in the last chapter.

What makes it most interesting, not just for being ‘first’, is the detailed descriptions of the country, of country life, and of country people. Atkinson is a talented writer. We like and understand her principal characters – Gertrude, Mrs Doherty, Mr Tudor, Charles – but there are a large number of secondary characters, individual, well described, and likeable.

There are Aboriginal people living on the edges of Mrs Doherty’s property and it is notable that they are described sympathetically, and where appropriate, individually. Late in the novel Gertrude, in service to another family, is at the mouth of the Shoalhaven River and is taken to see a gathering of tribes who have dammed part of the river to capture fish.

The fishing and feasting might last for several days; the natives from
some distance were assembled, and altogether it was a nearer approach to
the days antecedent of the Europeans, than any thing the party had
previously witnessed in Australia.

The period is the 1850s, so the Goldrushes are well underway, though this has seemingly not caused the manpower problems described by Henry Kingsley, and later by Miles Franklin writing as Brent of Bin Bin. Both those authors describe the good country in the Southern Highlands as having already been taken up when their protagonists arrive in NSW, so their properties are further south, in the mountains, where Mrs Doherty also has two or three secondary properties, only vaguely described because that was not country Atkinson was in.

We see both grazing properties, “thousands of acres”, and farming properties, just tens of acres, closer in to Sydney, being cleared by axe and fire. We see country life and town life, with monied women – not many men – reaching up towards middle class gentility, sending their daughters away for a year “to learn their letters and to play the pianny”.

But above all, we are in the presence of a moral and religious young woman who is trying to live her life, not just by doing no harm, but by doing good. Mrs Gaskell, Charlotte Bronte, Charles Kingsley all wrote in this way, and around the same time, so I am left wondering by whom she (and they) might have been influenced. Certainly The Pilgrim’s Progress (1678), but who more recent?

I am interested that both Mrs Doherty and Gertrude have elements of independence, but only elements. Mrs Doherty prefers to be out and about on her property, rather than be stuck in the house, but when it comes down to it she falls in a heap without her supervisor. She’s no Mary Reiby or Elizabeth Macarthur! Likewise, Gertrude is always willing to work, to support herself. Though I am unsure why, when she has to leave the property, she does not attempt to remain in the lower middle class as a school teacher or governess, rather than seamstressing. Gertrude never falls in a heap, but she is sure all the same that she would prefer not to remain single.

The National Library site says ” [Atkinson] cannot avoid a wandering mode of picaresque”, which is true, but more importantly, “this is a novel which refuses to understand Australian colonial as English life transported elsewhere” and in that it can be seen as antecedent to Barbara Baynton, say, rather than Atkinson’s contemporary, Catherine Helen Spence, or later writers like Rosa Praed and Ada Cambridge.

Atkinson went on to write a second novel, Cowanda, The Veteran’s Grant (1859). She was also a talented artist, providing illustrations for both her novels (for instance the frontispiece above), and was an important early amateur botanist. She married ‘late’ and died aged just 38 following the birth of a daughter.

see also:
A list of writers from this period with links to reviews, at The Australian Legend (here)
Extract: A view of local Indigenous people still living traditional lives (coming Fri. 18 Feb 22)