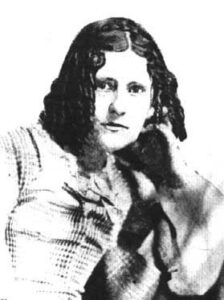 Extract from Gertrude the Emigrant (1857). We are on a property in the NSW Southern Highlands, 100 km south-west of Sydney. Mrs Doherty is the owner, and Mr Tudor is the Supervisor. Here Gertrude meets for the first time the local Indigenous people, most likely Gundungurra.

“Would you like to go down to the camp and see the Blacks?” inquired Tudor.
“Yes,—I should but—”
“There is no occasion for fear; and I would accompany you. Rude as their dwellings are there is something, at least to me, interesting in the sight of an encampment. Last summer we had the remnants of three tribes assembled here: our blacks were going to have a Coroborry; and as it is usual in these cases, sent messengers to invite the other tribes to join them; and they had a grand dance: but I must not tell you about it now, for you are in need of rest.”
“When shall we go down to the encampment?”
“To-morrow at sun down if that will suit you.” 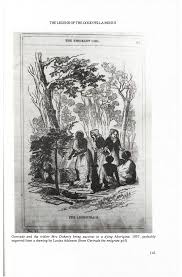 The following day Mrs. Doherty and Gertrude each leaning on an arm of Mr. Tudor started on their excursion.
“Poor creatures!” Mrs. Doherty said, as she stuffed a handful of “figs” of tobacco into her pocket, “they have only learnt our bad habits.”
“They have indeed. Is it not a reproof to us Miss Gertrude that even when conversing among themselves in their own dialect they interlard their disputes with oaths in our language.”
“But Mr. Tudor, does no one instruct them?”
“A few Missionaries have been among them, and no doubt done their utmost to repel the flood of iniquity poured in, by the corrupt and ignorant class, who chiefly mix among the native population.— Theirs is not merely to instruct the ignorant, to say to the inquiring “behold the Lamb of God,” but they have to cope with counter influences.—Is it a wonder then that little, or nothing is done? Still an unknown God reigns above and around them—still they look on that work which the Earth Spirit in “Faust” says:
“Tis thus at the roaring Loom of Time I ply,
And weave for God the Garment thou seest Him by?”
and see not God in his works. But little private effort to enlighten them is made, so they are dying among us unheeded, and soon like the emu and kangaroo will be traditional in the civilized districts.
“They have frequently abilities of no mean order; and when not corrupted by white people are by no means a disagreeable race: What did you think of Urutta?”
“He is rather good looking; and what splendid eyes some of the women had.”

The appearance of the various individuals who had visited the farm the previous day were duly discussed; till the increasing beauty of the scene called their attention. They had left the cultivated fields, and entered a vale between two wooded hills, divided by the creek, which as they advanced became rocky and wild in its character; the stream was here composed of long “water holes,” extending sometimes over a mile in length, and of no inconsiderable width. Mimosas and Honey-suckle trees grew on the banks; and Sallows dipped their boughs into the water, which was bordered by bulrushes and canes: and beyond, floated leaves of water lilies like fairy islands, rich in verdure.

Every now and then as they proceeded a Guana crossed their path and plunged into the water: or a Tortoise startled from its sleep on a flat rock or prostrate trunk of a tree, wriggled off with all speed, and sought safety beneath the surface of the creek. Ducks and kingfishers of rare beauty took wing at their approach; and the elegant blue Crane paused in its fishing to watch them pass; the Sun was approaching the horizon, and the light streaming between the trees looked bright and golden, as if to witness to the splendour of its source: the lengthening shadows made the woods appear dense and solemn; and as usual in an Australian forest silence reigned supreme; hardly relieved by the wild unearthly clamour of the laughing jackasses which were assembling at their roosting places.

Gloriously the Sun sunk to rest among the scattered pile of clouds, which caught vivid rays of crimson, yellow, and rose, from its departing splendour.

The thoughts of the peculiar people fast sinking into a heathen grave, and soon to be no more the dwellers in the land, could not fail to bring a sombre sensation of awe into each heart.

They had ceased to converse, and now walked on in silence, still keeping by the side of the stream which threaded its course between wooded and rocky hills. Solitude unbroken reigned there; and the race that had once hunted the kangaroo and emu through those thickets, and laid the snare for eels and watermoles in the creek were mostly cold in death; and the soul, the uncultured soul had sped forth on the unknown future, to stand one day as a witness against those who had taught it naught but evil.

Something of this kind was passing through Tudor’s mind, and he turned to Gertrude to express the thought: but checked himself as he watched the movement of her lips, and the half raised eye fixed on the bright clouds above: at that moment too Mrs. Doherty exclaimed with a shudder.

“Do Tudor say something, this gloom brings back such wretched thoughts that it horrifies me! Do talk about something.”
“Did you never find that when you wished to talk merely for the sake of talking you have nothing to say?” said he smiling.
“Bless me, three people with tongues in their heads unable to speak,” retorted she tartly.
“Will you describe the dance Mr. Tudor, which you mentioned last evening?” interposed Gertrude.

With a cheerful smile of acquiescence he began: “I will give you some idea of a far grander ball I witnessed on the Shoalhaven some years since. There were probably a hundred or more Natives engaged in it. I was staying the night with a family residing there, and accompanied by some of the members of the household walked out to see the dance.

“The Blacks had selected a well grassed level about a mile from the River, thinly scattered over with high and heavy timber. When we arrived only a few women were visible, squatting in a group on the ground, near a small fire of light wood; they had lying on their knees a ‘possum skin cloak, folded into a small compass, with the fur turned in.—Supposing we were too early for the dances in which the women never join, we entered into conversation with them. It was a very dark night and the only light was that of the little fire before us.

“While I was recommending a remedy for a severely lacerated arm inflicted by a falling bough of a tree and bending over the woman’s arm examining it I was startled by an exclamation from my companions. Suddenly there had started from behind the trunks of the trees various figures painted with pipeclay and ochre, chiefly to represent skeletons.

“In their hands they held a flaming bunch of twigs, or dry fern, which sufficiently lighted up their figures to enable the painting to show, leaving the sable skins in obscurity. Never shall I forget the scene! it was indeed a “dance of death;” and the monotonous beating of the women on the skins, and their low chanting increased the solemnity: as it might be construed into a dirge for the dead.

“Their mode of dancing was totally unlike that of ours, I understood that they were new and were acquired from a visitor from Bathurst, who had been some months with the tribe instructing them. They imitated the springing movements of the kangaroo in one dance, in another they placed the palms of their hands together, and shaping the fingers into a rude resemblance of the back of the emu, held the hands before their face and hopped along in circles; then they threw themselves into a sloping posture, at an angle that could only be the result of long practice and great muscular strength.”

At this moment the barking of dogs, and shrill voices clamorously bidding them lie down announced the vicinity of the encampment. They had left the creek and entered upon a small and clear level, among a heavily timbered forest. The camp formed of the green branches stripped from the trees around, were so arranged that each should have strict privacy, by being turned with its entrance towards the back of the one before.

The numerous lean and hungry dogs yelping round the visitors, called out all of the natives who were at home; and they gathered round to welcome them, and to receive Mrs. Doherty’s presents.

Little fires burnt before each dwelling, and at many roasted an opossum, or squirrel merely skinned, or plucked of the fur, and cast into the embers. A few turnips and potatoes, presents from the neighbouring farms, added variety to the supper, and the tin vessels of tea simmering by the fires gave evidence that the love of luxury had found its way into the bivouac.

The skins of opossums stretched out by small wooden pegs on squares of bark, peeled from some neighbouring tree, were standing in situations to expose their moist surfaces to the influence of the air.

“What think you of such a life?” inquired Tudor of Gertrude.

“In a storm of rain?” she enquired smiling; and he laughed, while the sable beings round joined in sympathy although ignorant of the cause of mirth, and the next minute several of the women were shedding tears and moaning over some trifling causes of sorrow which Mrs. Doherty made inquiries about, in order to relieve them if possible.—

“How impulsive are these poor creatures!” said Gertrude, “but Mr. Tudor there is the cry of a curlew, and see, the sun has set. It will be dark before we reach home.”

While she was speaking several of the men who had been absent returned, for the Aborigine will on no account be away from his camp during the dark; and the visitors started for home, after exchanging a few words of greeting with the new arrivals.