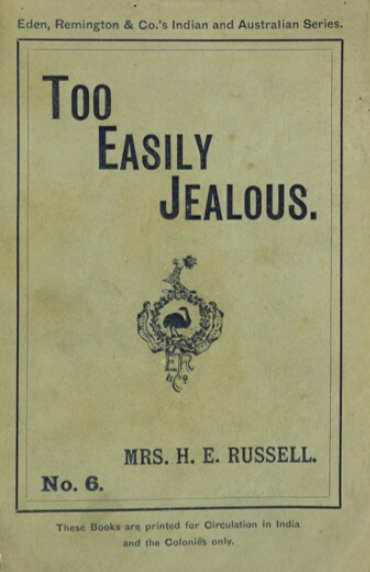 While compiling the archive of online texts by Australian women writers, I come across many of the writers’ names are new to me, writers whose lives, work and contribution to Australian culture have all but been forgotten.

“Mrs H E Russell” is one such author.

In the AustLit database, there are six works listed for Frances Emily Russell née Robey (1846-1899), works published under her married name, “Mrs H. E. Russell”. This list comprises two novels: Too Easily Jealous and Joyce Martindale; one short story and three poems. The biographical details given alongside her entry are mostly of family relations, indicating her roles of daughter, wife and mother. An obituary in the Goulburn Herald (digitised on TROVE) sketches in a little more of the picture of Russell’s life:

THE death of Mrs. H. E. Russell, which took place at Keston, Kirribilli Point, on Thursday last, following on illness of only three weeks will be regretted by many. Mrs. Russell was well known in Sydney society; and just before her illness she was one of the hostesses of the Victoria Salon. Her interest in a number of religious and philanthropic objects was long continued. She was one of the small group of women writers in Sydney. Her two novels, which were received with interest, described with animation some aspects of city and country life, and as an occasional contributor to the Herald her literary abilities also found scope. She was the wife of Mr. H. E. Russell, chairman of the North Shore Steam Ferry Company, and as a mark of respect the Milson’s Point boat carried their flags at half-mast yesterday. Mrs. Russell was a resident of Goulburn many years ago, her husband being the manager of the A. J. S. Bank. (26 Jun 1899)

A further search on Trove brings to light the fact that Russell was not only interested in religious and philanthropic ventures: she was also a founding member of the Women’s College at Sydney University; she was instrumental in helping set up a “factory girls’ club” and a home for consumptives; and she advocated for women’s suffrage. The reference to her being “an occasional contributor to the Herald” intrigues me. I double check on AustLit: none of the titles for Russell are listed as having been published in the Herald. Those “contributions”, I begin to suspect, were written under a pseudonym.

I stumble across Russell’s pen-name when it is mentioned in a review of her novel, Too Easily Jealous, in 1892: “A new Australian writer has entered the lists of fiction. Mrs. H. E. Russell, already known by her contributions to the Sydney press under the signature of ‘Eucalypta’ [emphasis added]…” I double check: AustLit makes no mention of “Eucalypta” being attributed to Russell or anyone else.

Another search of Trove reveals a forest of references.

If I could go back in time, I’d ask Russell to choose a different pen-name: it would simplify the task of distinguishing her writing from items relating to horticulture. Nevertheless, after several hours’ exploration, I come up with a list of twenty pieces written by “Eucalypta” which we can add to the Russell’s output. These include titles such as: “A Plea for the Better Development of Woman” (1890), “The Poet of the Ideal” (1891) – on Browning and Tennyson – and “The Heroic in Woman” (1890). In the latter column appears the following stirring passage:

[T]he history of woman may in brief be summed up as the history of injustice… Why have not women been brave enough to fight for themselves as they have fought for others? for if you say they only fight for great causes, surely their own deliverance is cause enough. Then why are they not all united to strike a blow for freedom? Partly because in so many cases their fetters have bound them heart and soul in the interests of their oppressors, and partly because their nature is to bless the hand that wounds them.

Her lament cries out to us across the years, right down to the #metoo movement of today.

It is not only Russell’s Herald columns that are missing from the AustLit database, I discover; absent also is her essay, “Womanhood Suffrage” (1891), published in The Daily Telegraph under her married name. Such an omission makes me wonder: how many more writers have incomplete entries on AustLit that our project can add to? More intriguing, are there Australian women writers whose names don’t appear there at all, writers who have been completely overlooked?

An answer to the latter question will keep for another day.

A list of Frances Emily Russell’s work, including her columns, appears on our 1890s archive page. An extract of her essay on “Womanhood Suffrage” will appear on Friday.

Elizabeth Lhuede published a few poems and short fiction in the 1990s while she was working at Macquarie University as a tutor and research assistant. She took a break after completing her PhD, and returned to Macquarie later to teach English and Creative Writing. More recently, Elizabeth instigated the Australian Women’s Writers Challenge and, under the pen-name Lizzy Chandler, has had two e-novellas published with Harper Collin’s Escape imprint (romance and romantic suspense), one of which has been anthologised in print.