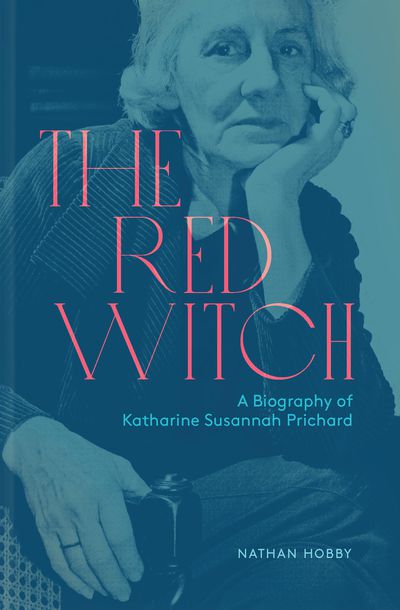 A review of the first biography of Katharine Susannah Prichard since her son, Ric Throssell’s Wild Weeds and Windflowers (1975)

A comprehensive literary biography of Katharine Susannah Prichard (1883-1969) is long overdue. We, Nathan’s fellow bloggers, have waited long years through his PhD, fatherhood, being taken up by Melbourne University Press, and finally a year’s delay due to ‘Covid’, for this month to arrive. We have learnt a lot about Prichard in the meanwhile, but that doesn’t compare with finally seeing the book in the hands of readers. 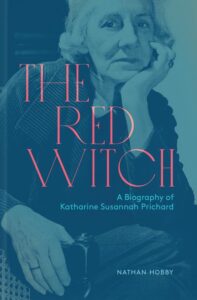 Nathan wrote a brief overview of Prichard’s early life for us which we ran last month, so I won’t rehash it here. My big interests are what were her influences, what part did Communism play in her writing.

In December 1907, [Austrian Socialist] Rudolf Broda published the first issue of The International: A Review of the World’s Progress. Alongside a piece on wage boards by [Melbourne Herald Editor] William Thomas Reay and “The Women’s Movement in Australia” by Vida Goldstein, Prichard contributed a short manifesto on Australian literature –

When we remember that this country was known to the civilised world as the Terra Australis Incognita, we must be prepared to find its literature criticised as for the most part imitative. Of our earlier literary efforts this is undoubtedly true, but so strenuously national is the spirit of today, so lively and vigorous the sense of our growing strength in intellectual and artistic life, that Australian literature is abandoning this ‘imitativeness’, these swaddling-clothes of its infancy, and adopting the toga virilis of originality. It has reached the adolescent stage—it is astir with great things; growing daily in power and freedom. Bushrangers, drought, and dead sheep have too long been the entire tale of our existence. With our national feeling is growing a sane and vigorous treatment of the problems which affect our social and political life, an idealisive [sic] veil of poetry and romance is being woven to cover the crudities of our evolution. The genesis of nationhood lies in its literature, and with the notion of elevating and glorifying the patriotic instincts Australian writers are dragging the minds of Australian people at the chariot wheels of their imaginations. Yet the muse of Australia is elusive—[Henry] Kendall caught ‘A glimpse of her face and her glittering hair / And a hand with the harp of Australia’. But no-one has completely expressed the characteristic of our country, life and people. We await transfiguration at the hands of a great writer.

(Nathan appropriated ‘Astir with Great Things’ for the title of his PhD thesis).

My opinion is that Prichard underestimates her predecessors – Catherine Helen Spence, Catherine Martin, Barbara Baynton, Mile Franklin – still, was she to be that ‘great writer’? Maybe. But that mantle would more likely go to Henry Handel Richardson who was also just then getting started.

Later, in life and in the biography (in 1933), Prichard and Richardson meet, in London. In private each is critical of the other, Richardson for Prichard’s rawness and Prichard because Richardson’s viewpoint is too English. But Richardson has already published The Fortunes of Richard Mahony and it is clear she has pulled ahead.

Prichard’s own career started quietly with A City Girl in Central Australia published as a serial in New Idea in 1906 She wrote the first draft of The Wild Oats of Han,in 1908, and The Pioneers, her first novel, was published in 1915 after some years working in London as a journalist.

The biography spends time on Prichard’s personal life, because of course it feeds into her writing. Nathan is sure he has identified her first, older (married), lover – ‘the Preux Chevalier’ – discussing his influence and that of her second lover, Guido Baracchi, who marries someone else but whom she later stays with (and his then partner) in Moscow.

In 1919 she marries returned serviceman and war hero Hugo Throssell and moves with him to his home state, WA, to live on the outskirts of Perth, at Greenmount – a house which is now the Katharine Susannah Prichard Writers Centre. They have a son, Ric in 1922. Over time Prichard finds the marriage unsatisfying. In 1929 she takes a long trip alone and in Sydney meets poet Hugh McCrae who becomes her next lover, at least by correspondence.

Strangely, Greenmount in 1922 was also home, briefly, to DH Lawrence. It’s there he meets Mollie Skinner with whom he goes on to write The Boy in the Bush (1924). Prichard was a Lawrence fan, but she was unable to meet him, though she does become friends with Skinner.

In 1921, Prichard was a foundation member of the Communist Party in WA, and this feeds into Working Bullocks, a love story framed by a failed attempt to organise workers in the timber industry in south west WA. But her interest in Party matters wanes, and there is no analysis of the situation of the virtually enslaved Aboriginal workers in her next, most famous work, Coonardoo, though Prichard is at least clear that Aboriginal women were taken up and discarded at the whim of white men.

Haxby’s Circus was inspired by an injured trapeze artist brought to her doctor brother’s surgery when Prichard was housekeeping for him in rural Victoria before her marriage, reinforced by her travelling with Wirth’s Circus on their dedicated train through the WA Wheatbelt.

In 1933 her sister, married to a plantation owner in Ceylon, sends her a ticket to travel to meet her in London. There Prichard catches up with her publisher, Jonathon Cape, and HHR as abovementioned, and goes on, under her own steam to Russia. The resulting book, The Real Russia (1934) is glowing about the progress being made under Stalin. Nathan, himself of the left, is critical of this, unduly I think. Whatever we think now, a great number of sensible people were excited by the possibilities of a workers’ state in the 1930s when the alternative, Capitalism was crashing to the ground in the Depression.

On her return to London, Katharine sees in a newspaper report that her husband, his marriage and his business failing, has committed suicide.

Prichard’s next novel, Intimate Strangers (1939) was substantially complete prior to her trip to Russia. The story of a failing marriage, it is is possible that her husband had read the ms, read it as about himself, in the days before his suicide. For some reason, McCrae also stops writing to her at this time and so Prichard is doubly bereft.

After Intimate Strangers comes the ‘potboiler’ Moon of Desire (1941) written because Prichard needed the money, and then her most substantial achievement, the Goldfields trilogy The Roaring Nineties (1946), Golden Miles (1948) and Winged Seeds (1950) which Canadian writer, Marcie McCauley will review for us in July.

At the time of Katharine’s trip to Russia, the newly created Union of Soviet Writers had taken control of Soviet literature and was developing a doctrine of socialist realism… The Comintern envisioned an international literary network and the union’s Foreign Commission liaised with sympathetic writers around the world. In November 1934 [there] began a correspondence between the Foreign Commission and Katharine which was to last the rest of her life…

It was from this exchange and her experiences in the Soviet Union that Katharine developed her ideas about what faithful communist writing – socialist realism – should look like. One element was immersion in the work and lives of the people… A second element … was a ‘sympathetic understanding of the causes behind the social tyranny of our time’ – which is to say writing that exposed the ways capitalism oppressed people for profit. A third element was language. She quoted Gorky saying, ‘The simpler the language the better …’ It was a principle she adopted, moving away from the influences of DH Lawrence (Working Bullocks) and modernism (Intimate Strangers) and towards a plainer style in her late novels.

Prichard, now in her fifties, her son away at a posh boarding school (reflecting perhaps her regret at not attending PLC Melbourne with her friends Hilda Bull (Esson) and Nettie Higgins (Palmer)) devoted the period 1935-1939 to spearheading “a host of organisations which were fronts for the Communist Party” – the Australian section of the Comintern’s International Union of Revolutionary Writers, the Workers’ Art Guild, the Spanish Relief Committee, the Modern Women’s Club.

In August 1939 Stalin signs a non-agression pact with Hitler. In February 1940 Guido Baracchi cables Prichard to say he has been expelled from the Party for ‘Trotskyist tendencies’ – “Stalinism [is a] betrayal of Lenninism … [I am] continuing full Lenninist fight against war and for proletarian revolution.” In June 1940 Prime Minister Menzies declares the Communist Party of Australia illegal. Through all this Prichard remains staunch. Eventually, with Hitler invading Russia, and the election of a Labor government, the pressure of illegality at least, is lifted.

Prichard had a fellowship from the Commonwealth Literature Fund to research her Goldfields trilogy, and put some months of work into it in Kalgoorlie, but her heart was with the Russians, for whom she undertakes a major speaking tour. Nevertheless, with the fall of Singapore to the Japanese in 1942, she gives permission for Ric, already a conscript with ‘Signals’, to volunteer for the AIF and to be sent overseas.

Nathan devotes some chapters to Prichard’s ‘hardline loyalty to the Party’, her move to SYdney in 1942, where she is voted onto the Central Committee, and (dubious) allegations of her spying for the Russians.

In 1944 The Roaring Nineties was accepted for publication by Cape (but delayed due to the paper shortage); Haxby’s Circus was reissued with a print run of 25,000 by the Australian Pocket Library; and the short story collection, Potch and Colour was published by Angus & Robertson. She writes to a Russian friend that they were “chiefly stories which I have had to write for the Capitalist press, so without any special socialist significance, although they are realistic of Australian conditions, and not contrary to my Marxist conception of things and people.”

This tension between Australian colour and her commitment to Marxism informs her remaining writing. After the trilogy she had one more novel in her, Subtle Flame (1967), plus the ‘underwhelming’ autobiography, Child of the Hurricane (1963). Defending her version of Marxism to the end, even against the CPA, she died in October 1969.

Nathan wrote somewhere his ambition was write a biography in the style of Hazel Rowley’s Christina Stead (1994) and he has certainly done that in this sympathetic, comprehensive and well-documented account.