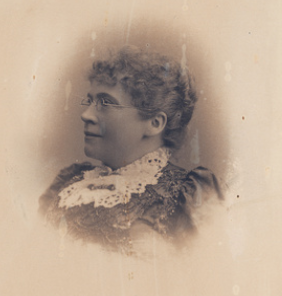 How often are women remembered by their relationship with the men in their lives? And to what extent does resorting to a male pseudonym in order to be published contribute to women writers’ invisibility in history?

Take the case of “Mrs Thomas Charles Cloud” aka “Lindsay Duncan”. Her biographical snippet on the AustLit database begins, “Mrs Cloud lived in Wallaroo [a town in South Australia]. Her husband, Thomas Charles Cloud, was manager of the Smelting Works for over 20 years…” There follows her husband’s occupation, and date and place of death (England), along with a brief mention of their son who was wounded in the First World War.

Finally we get to: “Mrs Cloud was well-known in Adelaide through the publication of her poems in journals”. Four of her works are listed: Drift: A Volume of Stray Verse (1891), and three poems: “Christmas Guests”, which appeared in A Century of Australian Song (1888); and “Hush” and “Whispers”, both of which appeared in the anthology, Australian Poets: 1788-1888.

No sign of the author’s birth name, though the reference to Cloud’s poems having appeared in journals suggests there may be more works to be found. I search Trove for “by Mrs T. C. Cloud” and “by Lindsay Duncan” – the latter name, evidently a male pseudonym, appearing in inverted commas in advertisements for various publications of the time. What I don’t expect to find is over 80 more works by this author – 80! – including not only poetry, but also short stories published throughout the 1880s,1890s and early 1900s. Many were written for children, and a good number of them were syndicated. Among them are a series with the intriguing, gossippy title, “Tales of Our Township”.

Clearly Mrs T C Cloud is an overlooked author. The challenge now? To find out about her life.

Again I go searching, this time for “Mrs Thomas Charles Cloud”, “Mrs. Thos. Cloud” and every other version of her married name I can think. South Australia makes searching for births, deaths and marriages difficult as, unlike in Victoria, New South Wales and Queensland, there’s no simple, government repository of information to be consulted. So I must rely on Trove and the little newspapers of the time.

Apart from an obituary for Mr Thomas Charles Cloud in 1918 – which, judging by the content, was the source for the AustLit biography – I initially find scant information. Eventually, though, newspaper reports of musical concerts catch my attention; the performers are “Mrs T C Cloud” and “Miss Cloud”, accompanied by a “Miss Duncan”. That name sounds familiar. A further reference to “Mrs T C Cloud and her sister Miss Duncan” confirms where to look next. Sure enough, a “Cloud – Duncan” wedding notice appeared in 1882:

Ada Lindsay Duncan. Who would’ve thought the author’s supposed male pseudonym was in reality her own name?

Two birth notices for Mrs Ada Lindsay Cloud soon come to light, one for a daughter in 1883; another for a son, ten years later in 1893. This must be the son mentioned in the father’s obituary who enlisted in the First World War and lost sight in one eye. Strange – or maybe not so strange, given the times – there is no mention of the daughter in the obituary. Yet Doris Cloud, I discover, was a gifted violinist, and the reason her mother and father left Adelaide for England in 1903, after which the trail for Duncan’s biography – and her publications – grows cold.

Doris Cloud’s story is interesting in its own right, and gives us a hint of her mother Ada’s life:

Literary, Dramatic, and Musical.— Miss Doris Cloud, daughter of Mr. and Mrs. T. C. Cloud, will make her professional debut at Steinway Hall on the 27th hist., under the immediate patronage of Lord and Lady Tennyson. The press notice issued by her concert director (Mr. Ernest Lipsehntz) states that ‘she was born and bred in the remote country township of Wallaroo Bay, in South Australia, and comes of talented stock. When she was eight years old it chanced that a wandering Austrian music teacher [Herr Heinecke] drifted to the little township, and gave the child her earliest lessons on the violin. From the first he was amazed at the facility with which she conquered all the initial difficulties presented by the instrument, declared her to be surprisingly talented, and prophesied that she would become “a second Lady Halle”. After a distinguished career at Adelaide University, her parents, believing in her musical future, brought the little lady to England, and placed her under the tuition of Johannes Wolff, with whose confident wishes for her success she makes her first public appearance.’ Miss Cloud has recently been playing at the Austral Club’s at homes.

So, no mention of the illustrious career of Doris in her father’s obituary; and no mention either that Thomas Cloud’s widow was a poet and author whose work had been syndicated and anthologised.

How easily are women’s lives overlooked.

Did Duncan stay in England and die there?

As an afterthought, I do one more search, that for “Ada Lindsay Cloud”, knowing it was a convention for women again to be referred by their given names after they were widowed. Sure enough, I hit upon a mention in 1923 with “Wills of the Week”: “Ada Lindsay Cloud, late of Commin Co., Surrey”.

So now we have a date for when Ada Lindsay Duncan aka “Mrs T. C. Cloud” died, though not when she was born; or much else about her life. The last search, however, does turn up another poem, “The Golden Jubilee”, published under the name of “Ada Lindsay Cloud” in 1886; the poem was syndicated in several South Australian newspapers. Another to add to the list of works by an almost forgotten author.

The next challenge is to read her work and see if it’s worth remembering.

“Mr Coulson’s Queer Client”, a short story from the author’s “Tales From Our Township” series, will appear this Friday. Duncan’s works online can be found on our 1880s, 1890s and 1900s “stories from the archives” pages.

Elizabeth Lhuede had poems and short fiction published in the 1990s while working at Macquarie University as a tutor and research assistant. Having taken a break after completing her PhD in Australian poetry, she returned to Macquarie to teach English and Creative Writing. In 2012 Elizabeth instigated the Australian Women’s Writers Challenge and, more recently, has been compiling the “stories from the online archives” pages. Under the pen-name Lizzy Chandler, she has published two e-novellas with Harper Collin’s Escape imprint (romance and romantic suspense), one of which, Snowy River Man, has been anthologised in print.