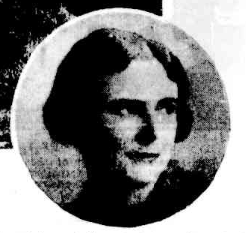 An article on the author Eleanor Dark, whose juvenilia was discussed on Wednesday. 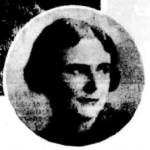 THE fact that one of our most highly-praised novels should have emanated from a woman who lives in the seclusion of Katoomba is not surprising, for Katoomba harbours several well-known Australian writers.

One of the most widely discussed of these is Mrs. Eleanor Dark, whose book, “Prelude to Christopher,” created such a furore last year when it was published.

Eleanor Dark lives with her doctor husband and a small son in a charming home on the outskirts of the mountain town. Without being inaccessible, Dr. and Mrs. Dark’s home, Naruna [sic], has retained an atmosphere of real Australian bush. It is situated a little off the beaten track which leads to the Cascades, and from the roadway is almost invisible, for it is surrounded by a depth of deciduous trees, boronia, bottlebrush, cootamundra, flowering gums, and other Australian flora, which have been carefully cultivated with assumed carelessness in emulation of the surrounding bush. Large lawns spread themselves before the house, and an avenue of wattles leads from the road, with its stream of sightseers and chattering tourists, to this haven of seclusion.

Stone terraces, rock walls, and flagged crazy paths make their appearance here and there in the large garden, while bright beds of blooms cultivated by Eleanor Dark herself form patches of rich colouring in the green surroundings. This authoress feels that in such work as gardening she can get into close contact with the earth and thus freshen herself for her work.

Mrs. Dark’s appearance belies her capacity for work, for, in spite of the fact that she has the management of the home to supervise, Mrs. Dark has two full-length novels to her credit, as well as one which is now in the hands of a publisher and one which is being completed this month. It seems almost impossible to believe that, added to all these, this young woman of the Mountains also finds time to indulge in an excellent game of tennis, is proficient in the royal game of golf, and is an expert rock-climber. The last perhaps is the least surprising, for, with her temperament and love of the out-of-doors, it would be difficult for her to resist the call of those blue mountains so near.

Warrumbungle Slope, Boar’s Head, the Three Sisters, Ruined Castle, and Arethusa Falls have all been climbed by Mrs. Dark with her husband, and many are the times she has negotiated difficult clefts, narrow ledges, or hung precariously from the end of a rope seeking to find a foot-hold in the smooth surface of some mountain-side.

What is really surprising is that Mrs. Dark should find any time at all for writing. When questioned as to how she did accomplish so much, she explained that a great amount of her work was done in the quiet of the early morn. “Prelude to Christopher” she thought over for a year before putting pen to paper. Then, she waited to get “a grip of the characters,” only to find as she proceeded that they got a grip of her instead. Linda (in this book) took complete control of her own actions, though the other characters flowed more spontaneously. In writing, Mrs. Dark, unlike many authors, who have to rely on technique more than on natural art, does not plan ahead.

Most of her work is done by long-hand in the composing stage, but later “Oliver” is called into requisition. “Oliver” is almost a member of the family, so deeply is he revered. He was bought second-hand with the proceeds of Mrs. Dark’s first short story, and is a very old-fashioned brand of typewriter. At the end of each line he protests in an old-world musical tinkle quite unlike the insipid sound of modern machines.

Mrs. Dark has apparently inherited the ability of her father, Dowell O’Reilly, for she also writes verse, her first efforts at the age of 19 having been accepted by the “Triad.” She is well known in Sydney, especially in Neutral Bay, where she went to school at Redlands.

Note: A list of Australian pseudonyms in AustLit does not record the identity of “G.M.M.”, and no other articles attributed to “G.M.M.” subsequent to this date have been found on TROVE, so it is assumed the piece is out of copyright. If anyone has more information, please let us know.